OroCRM is a CRM application we’ll be describing in a post dedicated to it tomorrow. This guide merely covers its installation and first run on a Vagrant Box – in particular, our good old Homestead Improved. If you need to get up and running with Homestead, see the original Quick Tip. If you want to follow along with tomorrow’s post on OroCRM, get a head start by installing it with the procedures below!

Before we begin, make sure your original Homestead Improved instance is working well, then destroy it. If you want symlink support and are on Windows, re-run the command prompt and/or Git Bash window through which you’ll be using Vagrant commands with Administrator privileges:

This is optional – symlinks are not required for Oro to work.

In Homestead.yaml, add the site:

The web subfolder is needed due to Symfony being the foundation Oro is built upon.

To make sure Symfony can write into its parent folders, we need to alter the mount mode of the shared folders. In scripts/homestead.rb update the following line from:

This is the last operation we’ll do outside the VM. Enter it now with vagrant ssh after running vagrant up.

The configuration required for OroCRM in this case is as follows (replace the folder paths with your own if necessary). Put this into /etc/nginx/sites-available/test.app, replacing the original content:

Due to some bugs in either Composer, or the way the dependencies are set up, we need to raise the limit of RAM use for PHP’s command line instance to 1G. The VM we’re running has a reserved 2G, so that’s no problem.

Once in the file, hit the forward slash button if you’re using Vim to enter search mode, type “memory” and hit enter to get to the line that says 512M. Enter insert mode with “i” and replace “512M” with “1G”. Save and exit.

Next, we need to activate pathinfo in php-fpm, as per this StackOverflow answer.

Search for the line cgi.fix_pathinfo and set the value to 1. Also increase the maximum execution time for PHP scripts to 300 instead of 30 (search for max_execution), because Symfony apps are incredibly overbloated and need a long time on first requests to generate the cache they then use on subsequent runs.

Finally, there’s one more tweak we need to do.

Add the line xdebug.max_nesting_level = 1000 to this file. We do this because Xdebug chokes out on the default nesting level of 100 when dealing with Symfony’s bloat. With this, we let it “go deeper”. Save and exit, and restart php5-fpm (sudo service php5-fpm restart).

We also need the php-intl extension installed, as with most Symfony projects.

First, let’s speed up Symfony. Go into app/AppKernel.php and add the following two methods to the class:

As per this post, this moves the logs and cache folders outside the shared guest/host folder, and keeps the IO operations inside the VM. Symfony is notorious for super-high IO, and having those folders remain in their default place is a death sentence for any Symfony project on Vagrant.

The “export” command before the “install” command is there to make sure Composer keeps going even if it encounters an insanely large repo. The prefer dist option means the dependencies aren’t downloaded as sources under version control, but as just sources or a phar package even. When --prefer-sources is used (default), the entire version tree is downloaded too, which slows down the download and increases the amount of disk space required, which is pointless if you don’t intend to hack away on the actual dependencies.

During installation (which will take upwards of 30 minutes easily due to the sheer bloat of Symfony’s dependencies), you will be asked for your username and password for Github due to their anonymous download rate limitation policy. This is nothing to be concerned about. At the end of the download, you’ll be asked for some configuration params regarding the database, mailer, etc. 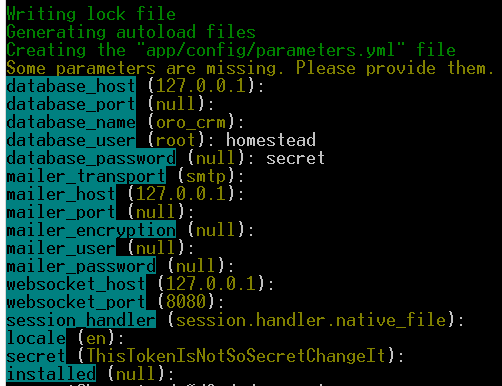 Then, run php app/console oro:install --env dev to install the app completely or visit http://test.app:8000 in your host machine’s browser. This will take another 10 minutes or so, but it’s the final step. For some reason, setting the --env flag here to “prod” fails with a class not found error, but works with “dev”, so I’m using that. If you give it a go and solve the problem, do let me know please.

You might have to activate the WebSockets server and the crontab, too, though these are optional:

OroCRM comes with a set of demo data you can import into your instance so you have something to play around with. This is identical to what you can find on their demo page, but more flexible, as it allows you to alter the source code, extend the app, and properly play around in it.

To install demo data, just run the following while inside the orocrm folder: 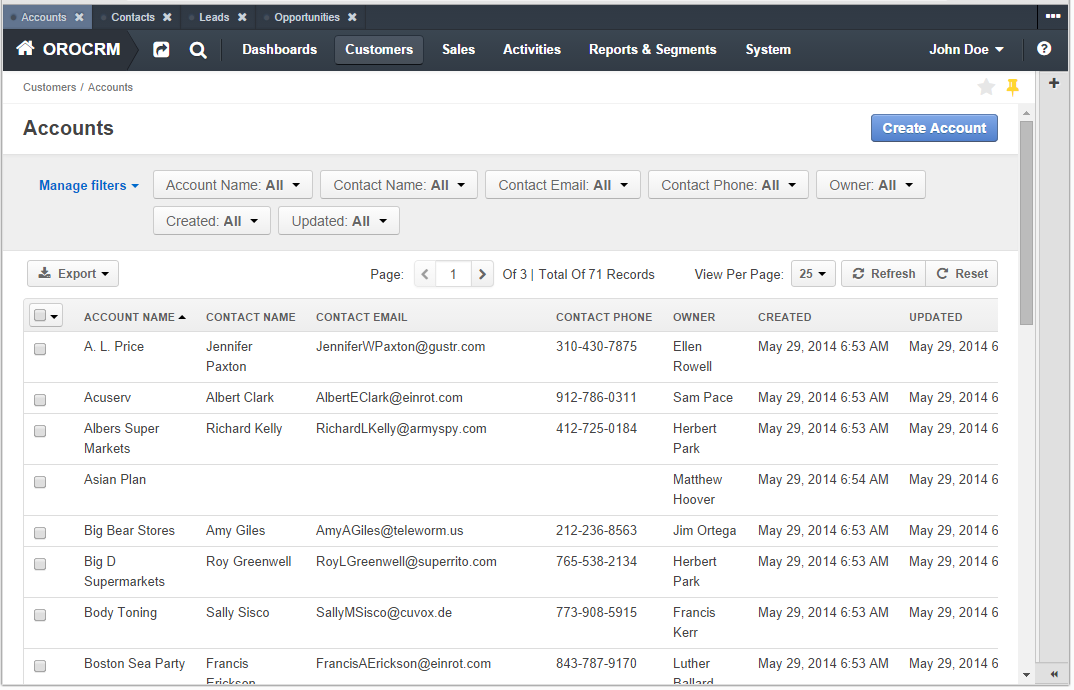 Was it too complicated? Perhaps. Then again, not many framework and app devs optimize their apps for VM installations just yet, so it’s no surprise. There’s not much the Oro team can do, anyway, seeing as they depend on some of the largest frameworks out there (Zend and Symfony both get installed during Composer Install, and in --prefer-sources mode the entire folder finally amounts to 420MB, which is ludicrous for a web app of any caliber; --prefer-dist wraps it up around 190MB).

I hope they’ll find ways to make the procedure lighter, or that they’ll at the very least focus on making version 2.0 much Vagrant-friendlier from the get-go and more multi-platform – especially since it’s now public knowledge that Symfony apps frequently have problems on Vagrant. Have you given this installation procedure a go yet? Let me know if you get stuck somewhere, and we’ll try and work through it together.

A First Look at OroCRM and Extending with BundlesBruno Skvorc