Rumors of a Google cloud-based file storage service have been circulating since 2006 but Google Drive was finally released on April 24, 2012. That’s an unusually long gestation period for a company that normally releases first then tweaks (or abandons) later.

Google Drive is a direct competitor to established players such as Dropbox, SugarSync, Box, Cubby, Microsoft SkyDrive and Apple iCloud. But is it better? 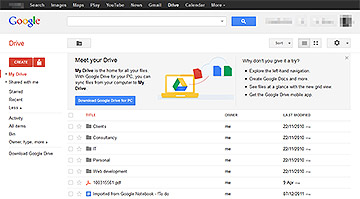 It’s important to realize that Google Drive is a replacement for Google Docs (GDocs). Once you sign-up with your Google account, the docs.google.com URL will redirect to drive.google.com. The web interface is fundamentally the same and you can add, create, edit and delete files and folders as before.

Replacing GDocs is a clever idea. The projects are compatible and your cloud-based documents can be browsed from your desktop — an attractive feature for those migrating from Microsoft Office. It’s also apparent Google has learned lessons from doomed projects such as Wave; it’s easier to piggy-back on the success of an existing project than build a new user base from scratch. GDoc’s 40 million users have little reason not to adopt Google Drive.

To make the most of Google Drive, you need to install the desktop application on your PCs, tablets and smart phones. Native applications are currently available for Windows, Mac, Android and iOS but you can be certain that other platforms including Linux and Blackberry will appear shortly.

The desktop application creates a folder on your device. Its files and sub-folders are automatically synchronized to the web and your other devices. Google offer a generous 5GB of free space with competitive plans including 100GB for $60 per year. 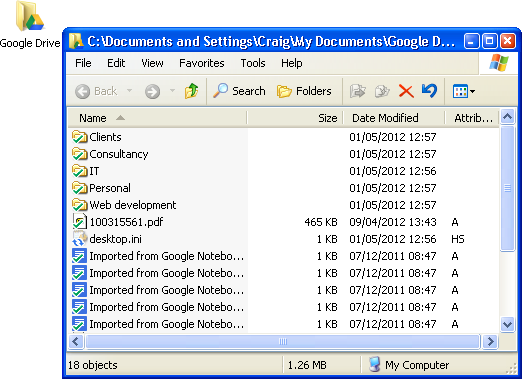 How Does it Compare?

Following sign-up, you’ll need to wait for around 24 hours before your existing Docs account is converted. I suspect Google will convert all accounts at some point in the future.

The desktop application is simple to install — assuming it doesn’t throw fatal errors. Many Windows users have reported similar experiences to me although installing Microsoft’s Visual C++ 2008 SP1 Redistributable rectified my issues. Once installed, there’s a little configuration to set the Google Drive folder and the application will run in the background so you can forget about it. On my system, it required a little over 30MB memory to execute — not horrendous, but Dropbox uses less than half that.

If you’ve used similar services you’ll understand how Google Drive works. The main difference is that you’ll find Google Docs files in your synchronized folder. Resources such as PDFs are downloaded as-is so you can open them directly.

Native Google documents are simply URL links which open the file in a browser. While that’s practical, it means you can’t open files offline and you don’t have a real backup in the event of connectivity or service problems. I’m not convinced it’s a major drawback but an option for automatic conversion to desktop formats such as TXT, RTF, DOC, ODT, XLS and PDF would be a bonus.

Finally, there’s the issue of trust. From an ownership perspective, the terms and conditions are clear:

You retain ownership of any intellectual property rights that you hold in that content. In short, what belongs to you stays yours.

When you upload or otherwise submit content to our Services, you give Google (and those we work with) a worldwide license to use, host, store, reproduce, modify, create derivative works (such as those resulting from translations, adaptations or other changes we make so that your content works better with our Services), communicate, publish, publicly perform, publicly display and distribute such content. The rights you grant in this license are for the limited purpose of operating, promoting, and improving our Services, and to develop new ones. This license continues even if you stop using our Services.

Could Google take a sneaky peek at your files to provide context-sensitive advertising? Put it this way, I suggest caution if you’re planning to upload documents containing personal information. But the same can be said for every online service since the dawn of the web.

In essence, there’s little to distinguish Google Drive from its competitors. Google has copied the best features from Dropbox and, while that’s no bad thing, it doesn’t offer a compelling reason to switch. Yet.

More competition is great for users, though. Google may drive down storage prices and you can install different services concurrently to obtain many gigabytes of free backup space.

Have you installed Google Drive? Do you prefer it to competing services? Should Dropbox be concerned? Do you trust Google keep their eyes off your data?