This tutorial guides you through building an interactive infographic in Adobe Edge Animate CC 2014 (see Figure 1). Along the way, you’ll learn how to bring your design to life with interactive widgets containing animated states. If you’re interested in infographic design, you might like to read this tutorial’s companion piece!

This tutorial walks through creating an infographic composition, from start to finish:

The tutorial assumes that you’ve already done the important work of collecting data, text, and a story or message for your infographic. When you’re ready to move from concept to design, Adobe Photoshop CC 2014 or Adobe Illustrator CC 2014 is a good place to start.

In this case, you’ll produce the background graphic in Illustrator. Later, you’ll convert the vector graphics to SVG (Scalable Vector Graphics) format by copying and pasting them in Edge Animate CC 2014. As the name would suggest, SVG files are scalable, and will work well with the responsive layout you’ll build in Edge Animate.

a. Download and install Adobe Illustrator CC 2014 and Adobe Edge Animate CC 2014 from the Creative Cloud.

b. Download the supplied files from the article, and unzip them to your Desktop. 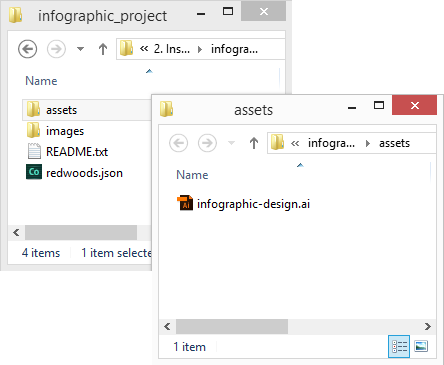 2. Create your artwork in Illustrator.

a. Open the infographic-design.ai file located in the assets folder of the supplied files. Double-click on the file to launch Adobe Illustrator CC 2014.

b. Take a moment to explore the design. You can see that the design is fully realized, and works as a standalone graphic to some extent. Although the text and timeline triggers appear in the mockup, you’ll omit those layers when you create the SVG file (see Figure 3). You’ll add the text and triggers in Edge Animate. 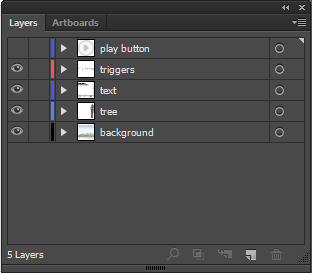 Figure 3: The organization of the design in the Illustrator file

c. Hide or lock the text, triggers, and play button layers, and select all the remaining graphics on the tree and background layers (see Figure 4). These graphics will become your background after you create your composition in the next step. 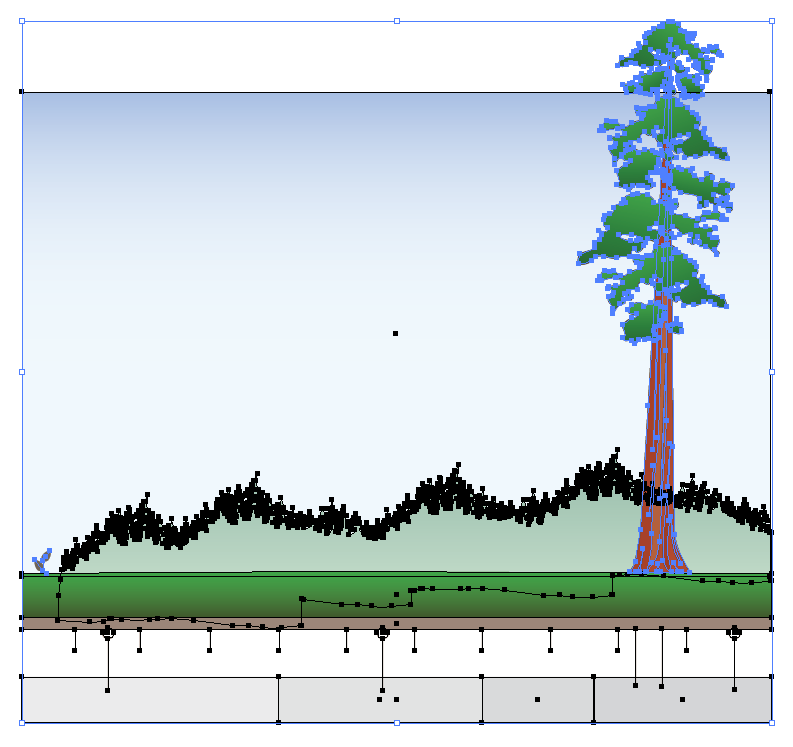 At this point, you’re ready move to Edge Animate CC 2014 to start work on your interactive composition. Leave Illustrator open, you’ll return to copy your background graphics in the following steps.

a. Open the current version of Adobe Edge Animate CC 2014. You’ll use the new Responsive Scaling features to create a design that scales its size to the size of the screen viewing it.

c. Update the Stage properties in the Properties panel to the following (see Figure 5): 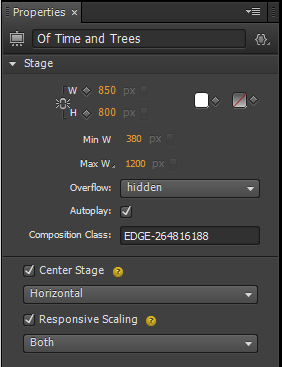 Figure 5: The Stage properties for the infographic

2. Copy and paste the background graphics from Illustrator.

a. Return to Illustrator and make sure you have all the graphics on the tree and background layers selected. Copy the graphics to the clipboard.

b. Return to Edge Animate, and paste the graphics onto the Stage. Notice that a dialog box appears asking you for the name of the resulting SVG file (see Figure 6). Enter the name Background.svg, and press OK. 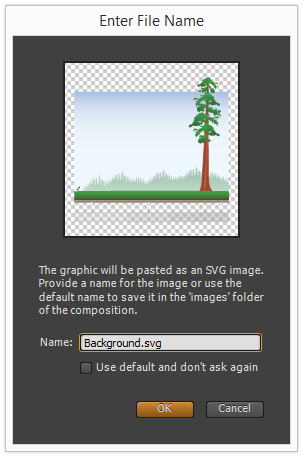 c. Position the SVG graphic on the Stage so that it sits center screen.

d. Take a look in the project folder and notice that the SVG graphic was saved to the images folder. You can open the SVG graphic in Illustrator if you need to make any edits.

a. Add text above the background graphic using the Text tool in Edge Animate. (You can copy the text from the completed project files if you like.) In my mockup, I’m simply using Arial (or sans) font, but you can add web fonts or your own font choices here.

The font sizes are as follows:

b. Select all the text, right click and choose Convert to Symbol. In the Create Symbol dialog box, name the symbol GridText, and press OK. Grouping the text inside a symbol cleans up the Stage (see Figure 7). 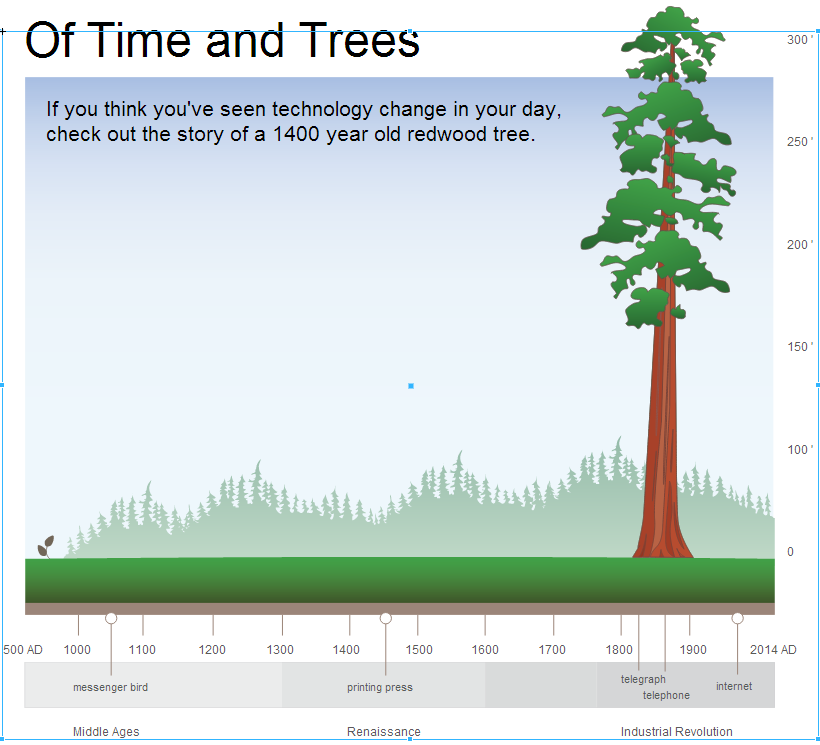 You’ll notice there are numbered timeline triggers in the mockup design. Rather than build 8 different graphics, you’ll build a single TimelineTrigger widget in Edge Animate (see Figure 8). What I’m calling a widget is simply an Edge Animate symbol that can be configured using a little code. The fun part is that the widget has its own timeline with animated states.

Figure 8: Instances of the TimelineTrigger widget along the timeline

1. Create the widget graphics and symbol.

b. Select both the circle and the text, right-click, and choose Convert to Symbol. In the Create Symbol dialog box, name the symbol TimelineTrigger, uncheck the Autoplay timeline option, and press OK.

c. Notice that the circle and text element now appear as a single grouped object. Double-click on the instance to enter its timeline.

d. At this point, you’ve left the main Stage timeline, and are now working in the TimelineTrigger symbol timeline. You can navigate back to the Stage using the Stage link on the top left of the Stage area.

2. Add labels to split the timeline into sections.

a. In the next steps, you’ll work with the timeline tools to add animated states to the widget. Take a look at Figure 9 to get familiar with the tool names and locations on the Timeline panel. b. Drag the timeline marker to the 0 mark, and click on the Insert Label button to add a label. Type the text “default” into the label.

b. Drag the timeline marker to the 1.5 second mark, and select the ellipse graphic and change its width and height amounts to 150% in the Properties panel. Select the text and change its font size to a larger number. Position the scaled graphics so they appear centered inside the symbol, Notice that colored animation spans appear on the timeline between the pinned points.

c. Select the animation spans, and click on the Easing button. Choose the Ease Out Elastic option.

a. Deselect the Toggle Pin Tool and move the timeline marker to the 2 second mark.

b. Select the Toggle Pin Tool again, and drag the timeline marker to the 2.5 second mark. Change the ellipse’s width and height scale back to 100%, and change the text’s font size back to the original size in the Properties panel. Position the graphics as needed.

d. Select the new animation spans, and click on the Easing button. Choose the Ease Out Elastic option.

a. Drag the timeline marker to the 1.5 second mark, and click on the Insert Trigger button. Notice that a Trigger icon appears on the timeline, and the Actions panel opens.

b. Click on the Playback button under the Pick an action section, and then click the Stop button (see Figure 10). 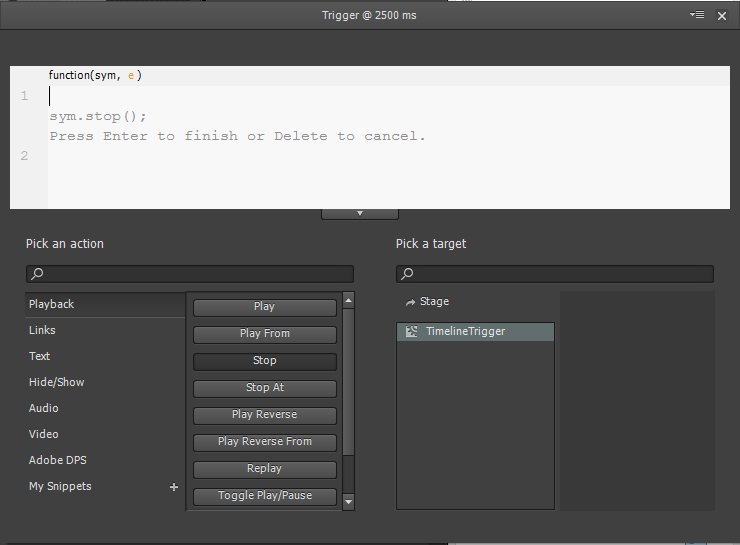 c. Select the TimelineTrigger target under the Pick a target section, and then press the Enter key to commit the code.

e. Add another stop action at the 2.5 second mark.

a. Select the Ellipse tool, and draw a circle above the other graphics.

b. Select the circle and set its opacity to 0 in the Properties panel.

c. Name the circle layer “Hitarea” in the Properties panel. Your timeline should look like Figure 11 at this point.

Figure 11: The completed timeline of the TimelineTrigger widget

Add code to the symbol to control the states.

8. Create widget instances and position them on the timeline.

a. Click on the Stage link on the top left of the Stage area to return to the Stage timeline.

b. Position the existing TimelineTrigger instance on the left edge of the timeline graphic.

c. Copy and paste the instance to create a total of eight instances. Rename the instances in the Timeline or Elements panel, so that they following the naming convention “Trigger[n]”, where [n] is a number between 0 and 7.

d. Position the instances along the timeline as seen in Figure 8.

9. Add code on the Stage to initialize the widgets.

a. While editing the Stage timeline, click on the Open Actions button next to the Stage element in the Elements panel. Choose the compositionReady event.

b. Copy and paste the following code in the Actions panel:

Essentially the pattern you just learned is an easy way to create buttons, and elements with states, in Edge Animate. You’ll return to work on the timeline triggers in Step 6.

Next, you’ll create a second widget that displays detail text (see Figure 12). This time, you’ll use two symbols. One will layout three text fields, while the other animates the layout on and off the screen. 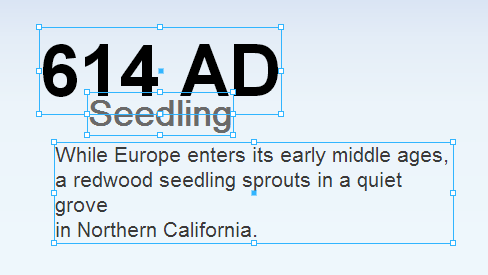 Figure 12: The layout of the DetailPanel widget

1. Create the text layout and symbols.

a. Use the Text Tool to draw three text elements on the screen. Position them to look like Figure 12, using the following font sizes:

Select the three text fields, and convert them into a symbol named DetailPanel. Notice that the text fields appear grouped in the DetailPanel instance.

c. Position the symbol instance in the left center of the Stage.

2. Add labels to create sections in the timeline.

a. Add the following labels to the DetailPanelAnimation timeline:

a. Select the graphics at the 0 mark, and drag them off the bottom of the Stage.

a. Setup an animation between the 1 second and 1.75 second marks. The panel should animate from a starting point of a few inches below the target position.

b. Set the easing to Ease Out Back.

a. Setup an animation between the 2 second and 2.75 second marks. The panel should animate from the target position, to the final position a few inches above. In the end, the DetailPanelAnimation timeline should look like Figure 13.

b. Set the easing to Ease In Back.

Add stop actions to the end of the show and hide animation spans to pause the text after each animated state.

In the next steps, you’ll import a data source, and bind all the widgets together.

So far you’ve built the view that will display your infographic data, but you still need a data source. In this step you’ll import a supplied JSON file that contains a list of facts related to the eight points along the timeline design. You can view and edit the JSON file in a text editor like Adobe Dreamweaver CC 2014 or Adobe Edge Code CC Preview.

1. Return to the Stage’s compositionReady event by clicking on the Open Actions button next to the Stage element in the Elements panel.

2. Copy and paste the following code below the initialization code:

3. The Actions panel should look something like this (see Figure 14). Figure 14: The code on the Stage’s compositionReady event

The code uses the built-in jQuery getJSON command to load the redwoods.json file. In the next step you’ll route the data to the view.

Follow these steps to bind the widgets to the data source:

1. Update the Stage code with a callback function.

a. Return to the Stage’s compositionReady code in the Actions panel.

b. Add the following code below the rest:

b. Copy and paste the following code inside the switch statement, in the “click” event handler, in the handleEvent function:

a. Return to the Stage’s compositionReady code.
b. Copy and paste the following code below the rest:

Choose File > Preview in Browser to preview your work. If you run into problems compare your work to the completed files for reference.

Try to take the concepts you learned in the tutorial, and build more interactivity and rich media into the infographic. For example, you’ll notice that the “extra credit” completed file has a play button and a timer that can play a slideshow. Deconstruct the file, and see if you can setup your own work as a slideshow. Have fun with it. Infographic: The Client’s Guide to Creating a WebsiteRicha Jain