Starting a new year could hardly get any better for web designers than this.

We have some of the best and most powerful web designing frameworks just waiting to be explored. These are frameworks that can help you build fully functional web templates within minutes and with extremely minimal knowledge of CSS and JavaScript coding.

There are great expectations for the year 2014. Responsive websites are already the Next Big Thing. Visitors from mobile and tablets have become an important factor for all websites. Every website has to look good and work well in every device.

In this article, we will list some of the best CSS frameworks that will help web designers and developers to explore their potential to build responsive and beautiful web applications in 2014

Whether you want to design a personal portfolio, a business website or a shopping cart, Twitter Bootstrap’s flexible and responsive capabilities will come in handy in all cases. It’s more than just a mere set of CSS and JavaScript rules, Twitter Bootstrap has within it an inbuilt responsive powerhouse. With many new features added to the third version of Twitter Bootstrap, it has once again proven that it is here in the web industry for the long run.

The JavaScript components of Twitter Bootstrap help you to design sliders that can run in any kind of device. Components like Modals, Dropdown, ScrollSpy, Tab, Tooltips, Popovers and Carousels are some of the best things you will like about Twitter Bootstrap.

Foundation Framework by Zurb has emerged in the second half of 2013 as one of the best frameworks for web designing with its version 5.0. With features similar to that of Twitter Bootstrap—and some significant enhancements—it is expected to climb the ladder of popularity in 2014.

Foundation framework boasts a 12 grid system similar to Twitter Bootstrap. It also provides reusable HTML components and JavaScript plug-ins in its package. But unlike Twitter Bootstrap, Foundation has support for Sass stylesheets. You need to compile the Sass stylesheet, convert it into normal CSS files and then use them in your project. Adding Sass support makes it more customizable for designers who want to give that personal touch to the websites.

With features like Off Canvas and Improved form, it would be interesting to see web developers explore this framework to the most in 2014. Refer to Tahir Taous’s article to know what’s new in Foundation 5. Try Foundation 5. 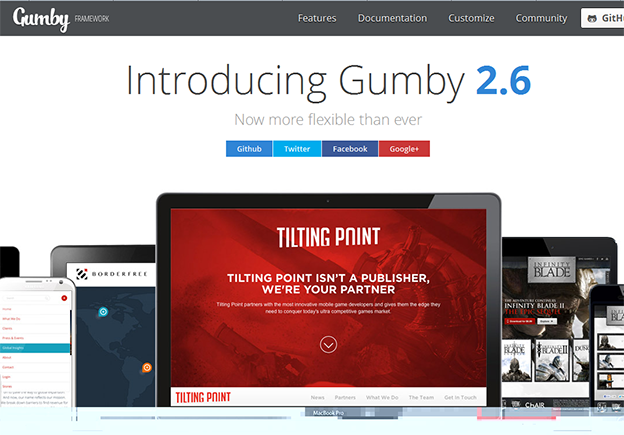 Gumby Framework is built on a Sass preprocessor that allows you to customize and build designs on top of the Gumby Framework. Designing with Gumby will require you to understand the basics of Sass. It can be customized by changing the variables values using Sass. Modular scale is another great inbuilt feature of Gumby that uses a Golden Ratio tool for typography.

Just like Twitter Bootstrap 3, Gumby framework provides support for Internet Explorer 8 and above and all the open source modern browsers. 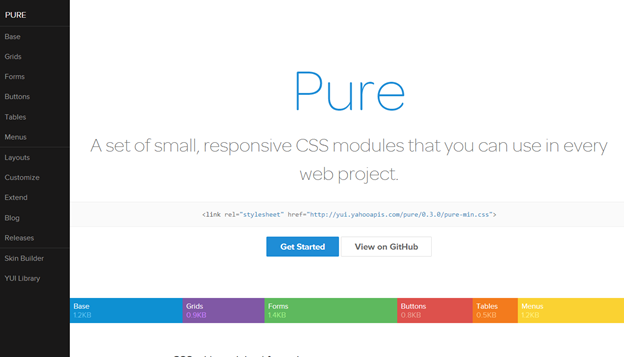 Yahoo Pure or Pure CSS is a lightweight CSS framework by Yahoo. It’s both extremely light and also responsive in nature. Unlike other frameworks, Yahoo Pure doesn’t have any JavaScript Plugins.

This framework also utilizes the popular 12-grid-layout system and has its own CSS rules to apply. For people who like the metro design of Windows, Yahoo Pure is the perfect CSS framework to start designing with. It promotes less shadow effects and almost no rounded corners in its designs. Yahoo’s skin builder can be used to customize the look when using Pure CSS.

Yahoo Pure CSS is perfect for developers who would like to stick to their respective framework but like to use the flat design. To achieve this, you have to just include the CSS file that is provided in the CDN by Yahoo. Try Pure CSS. 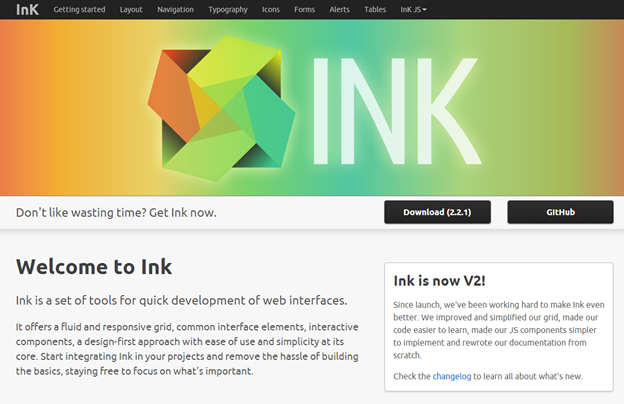 Being new to the industry and having learned from its seniors, InK provides solutions that most people could be looking for. It has both reusable HTML and JavaScript Plugins. The most unique feature in this framework is the ability to provide drag and drop support—which is still not present in Twitter Bootstrap 3, for example.

InK provides an amazing set of form validation classes which comes in very handy. Image processing is also another power feature. Using InK you can create multiple versiona of the same image and reduce the load time in various device types. It also has an impressive set of MIT licensed icons to play with.

With such an amazing set of power tools, InK is worth trying as a web designing framework, today. Try InK.

Other frameworks to try:

These are, at least, some of the best web designing frameworks that you can try in 2014. Why use frameworks at all? Well, who wants to start from scratch?

Note that the above list is not ranked in order of preference or excellence, it’s just list. Every framework listed has its own client, advantages and limitations.

I hope you enjoyed reading through the list. Now it’s your turn to let us know know which one of the above frameworks you think will have the greatest impact on web designers and developers in 2014. Leave your comments below, with supporting text.