In this article, we’ll build a complete system that allows you to blink an LED when you get email or a ton of other such events.

First of all, if you’re not familiar with them already, Arduinos are quite possibly the coolest things since sliced bread (or were, until the Raspberry Pi was released).

Check out this picture: 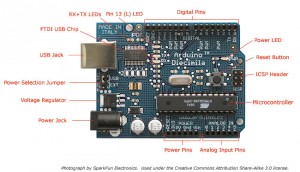 That board you see there is something like a “little computer”. But, this kind of computer isn’t nearly powerful enough to run something as enormous as Linux – the primary purpose of this “computer” is to drive things like LEDs, motors, sensors etc. Well, what’s the point of that? The magic is that you can program this little computer to manage its resources in certain ways. That means that we’re going to (somehow) program it to blink an LED when a new email arrives.

How on earth do you program it? Well, you connect it up to a computer, and use the Arduino environment (which is based on Processing), which allows you to write code for it.

Secondly, it controls LEDs by turning on and off its “pins”. If you’ve ever seen an “integrated circuit” or a “chip”, you know what those look like.

That’s the general concept. The problem is that the Arduino itself can’t access the internet (yes, yes, I know there are Ethernet shields, but those aren’t part of the Arduino) As a result, we have to somehow feed it the data that we must obtain from Gmail (or whatever email you use) in order for it to turn on the LED. That’s where the Ruby comes in.

Ruby, as we’ll all agree, is a fantastic and incredibly versatile language. But, controlling an LED with it is very difficult (especially over USB, which is a pretty high-level protocol), so that’s where we use the Arduino.

We’ll use Ruby to do two things. First, get data from Gmail, including the number of unread emails. Second, pass on that information as “blink” or “not blink” to the Arduino.

Ruby has us covered on both these fronts. The “gmail” gem makes it a snap to access the Gmail API, and the “serialport” gem allows us to communicate with the Arduino over USB. Now, let’s dive into the code!

The Arduino code is based on Processing. This language is very similar to Java and if you have any experience with “curly brace languages”, you should pick it up in no time. In fact, as long as you know any programming language, Processing is meant to be easy to learn.

It is fairly clear. There are two methods/procedures, loop and setup. setup is called (usually) only once, and loop is called repeatedly (as long as the Arduino is given power). Obviously, this code doesn’t really do anything. Let’s do an incredibly simple example, with an LED:

In order for this to be successful, you need to connect up an LED with the Arduino on pin 11, with the cathode (positive side) on pin 11 and anode (negative side) on ground.

This code is meant to give us a simple blinking LED – it calls a few functions that the Arduino environment gives us (pinMode, digitalWrite) to accomplish this.

In particular, calling pinMode tells the Arduino that we want pin 11 to be an output pin as opposed to an input pin (typically used for sensors, etc.). Then, in the loop method, we call digitalWrite to turn the LED on and off by setting the pin to high and low (around 5v and around 0v).

But, for our overall project (which, again, is to build a GMail notifier) to work, we need to communicate with the computer. We do this with Serial:

The confusing line might be the Serial.begin one. It basically sets something called the “baud rate” to 9600 – what that means exactly isn’t really all that important, you just need to know that both the computer and the Arduino must agree on the baud rate. This code repeatedly sends the line “RubySourcen” to the computer over USB. How do you view these messages? If you upload the code to the Arduino, you can click on the “serial monitor” icon at the top right of the Arduino environment in order to see the Arduino talking to you!

Alrighty, you can send stuff on USB to the Arduino. How about receiving?

This time, we’re using the Serial.available and Serial.read functions. They’re both quite simple; the former returns a positive number if bytes are available to be read, the latter reads a single byte (or character, usually) from the stream coming to Arduino.

Awesome, so, now we can read stuff from Serial and blink an LED. We have the parts down, let’s get all the Arduino code working:

There we go! The code is very straightforward, with a few interesting notes. First of all, I decided that the LED should, by default, be on. This means that we can tell if the system has power or not (never mind that the Arduino already has a power LED – LEDs look cool!) so we turn it on during setup.

Second, within blink_led(), we can’t just blink the LED once, because nobody would notice that. Thus, we blink it ten times!

The function of this code is that when the Arduino receives the letter “b” over Serial, it blinks the LED ten times.

Awesome! Now, let’s get into the Ruby code, which communicates with the Internet!

When I first started to map out the project, I thought that the Ruby would be annoyingly difficult because most APIs are always irritating in someway or another.

But, then, I realized that we have the awesome “gmail” gem! Download it immediately:

We’ll also need something with which we can access and communicate on the USB port with the Arduino. For that, we can use the “serialport” gem:

Let’s first use the serialport to get a feel for it.

We set a few variables (such as baud rate and things called “data bits” and “stop_bits”) and then we are able to communicate with the Arduino.

The most important point to notice is that the port_file variable will be different for you – you have to check what it is using the Arduino environment. If you look at the bottom left corner, you can note the a path that starts with “/dev/”, copy that path into port_file and you should be ready to go!

Once we do that, running code should blink the LED every 4 seconds. Awesome!

Now, let’s add in the gmail gem to watch it all come together:

The code isn’t the most elegant, but it does the job and does it clearly (especially in a tutorial, I think clarity is more important than brevity.)

If you run this, and send yourself an email, you should see the LED blinking! How does it work? It keeps checking the number of unread emails, and if that increases, it blinks the LED. Awesome, right?

We’ve completed our project. We built a GMail notifier with an LED. But, is that all we can do with our code?

Absolutely not. First of all, GMail need not be our only source of data. Maybe you can blink the LED (and keep blinking it) if there’s going to be rain tomorrow. Or, maybe when you have a message on Reddit. Or if there’s a new article on RubySource (I like this one). The Arduino code need not change at all, and most of the Ruby code stays the same, too, because all we are changing is the data and our intrepretation of it!

There’s many other directions you can go from here. You could build a notifier system with several LEDs and different data sources that distracts you even more than Reddit and Hacker News already do! With this article, you can now interface the Arduino with Ruby, and therefore, the internet with real-world objects. There’s quite literally a bazillion things you can do (not just with switching around data sources, of course) and you should definitely try more of them!

I hope you enjoyed this article about using the Arduino with Ruby. If you actually built the email notifier, give yourself a pat on the back – that’s a pretty cool thing to accomplish! If you have any other ideas, comments and suggestions, drop a comment!

Controlling an Arduino with Node.js and Johnny-FivePatrick Catanzariti