Recently we published a couple of tutorials to get you familiar with Git basics and using Git in a team environment. The commands that we discussed were about enough to help a developer survive in the Git world. In this post, we will try to explore how to manage your time effectively and make full use of the features that Git provides.

Note: Some commands in this article include part of the command in square brackets (e.g. git add -p [file_name]). In those examples, you would insert the necessary number, identifier, etc. without the square brackets.

If you run Git commands through the command line, it’s a tiresome task to type in the commands manually every single time. To help with this, you can enable auto completion of Git commands within a few minutes.

To get the script, run the following in a Unix system:

Next, add the following lines to your ~/.bash_profile file:

Although I have mentioned this earlier, I can not stress it enough: If you want to use the features of Git fully, you should definitely shift to the command line interface!

Are you tired of compiled files (like .pyc) appearing in your Git repository? Or are you so fed up that you have added them to Git? Look no further, there is a way through which you can tell Git to ignore certain files and directories altogether. Simply create a file with the name .gitignore and list the files and directories that you don’t want Git to track. You can make exceptions using the exclamation mark(!).

3. Who Messed With My Code?

It’s the natural instinct of human beings to blame others when something goes wrong. If your production server is broke, it’s very easy to find out the culprit — just do a git blame. This command shows you the author of every line in a file, the commit that saw the last change in that line, and the timestamp of the commit.

And in the screenshot below, you can see how this command would look on a bigger repository:

4. Review History of the Repository

We had a look at the use of git log in a previous tutorial, however, there are three options that you should know about.

Here’s what a combination of the options looks like:

5. Never Lose Track of a Commit

Let’s say you committed something you didn’t want to and ended up doing a hard reset to come back to your previous state. Later, you realize you lost some other information in the process and want to get it back, or at least view it. This is where git reflog can help.

A simple git log shows you the latest commit, its parent, its parent’s parent, and so on. However, git reflog is a list of commits that the head was pointed to. Remember that it’s local to your system; it’s not a part of your repository and not included in pushes or merges.

If I run git log, I get the commits that are a part of my repository: 6. Staging Parts of a Changed File for a Commit

It is generally a good practice to make feature-based commits, that is, each commit must represent a feature or a bug fix. Consider what would happen if you fixed two bugs, or added multiple features without committing the changes. In such a situation situation, you could put the changes in a single commit. But there is a better way: Stage the files individually and commit them separately.

Let’s say you’ve made multiple changes to a single file and want them to appear in separate commits. In that case, we add files by prefixing -p to our add commands.

Let’s try to demonstrate the same. I have added three new lines to file_name and I want only the first and third lines to appear in my commit. Let’s see what a git diff shows us. 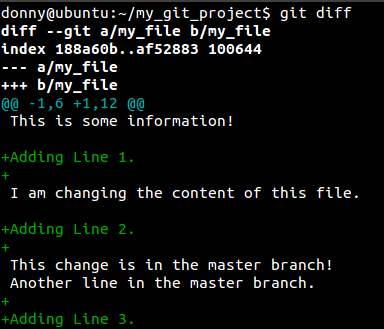 And let’s see what happes when we prefix a -p to our add command. 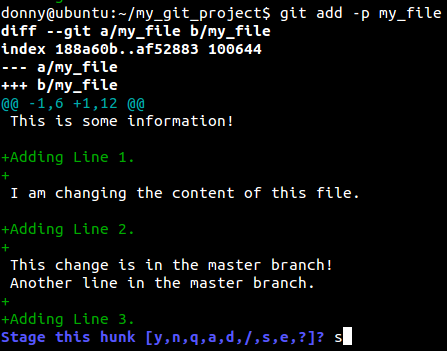 It seems that Git assumed that all the changes were a part of the same idea, thereby grouping it into a single hunk. You have the following options:

In our case, we definitely want to split it into smaller parts to selectively add some and ignore the rest. 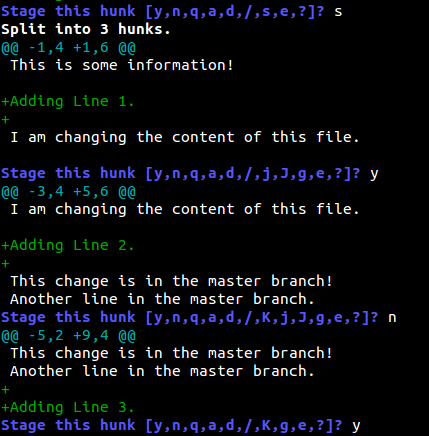 As you can see, we have added the first and third lines and ignored the second. You can then view the status of the repository and make a commit.

When you submit your code for review and create a pull request (which happens often in open source projects), you might be asked to make a change to your code before it’s accepted. You make the change, only to be asked to change it yet again in the next review. Before you know it, you have a few extra commits. Ideally, you could squash them into one using the rebase command.

If you want to squash the last two commits, the command that you run is the following.

On running this command, you are taken to an interactive interface listing the commits and asking you which ones to squash. Ideally, you pick the latest commit and squash the old ones. You are then asked to provide a commit message to the new commit. This process essentially re-writes your commit history. 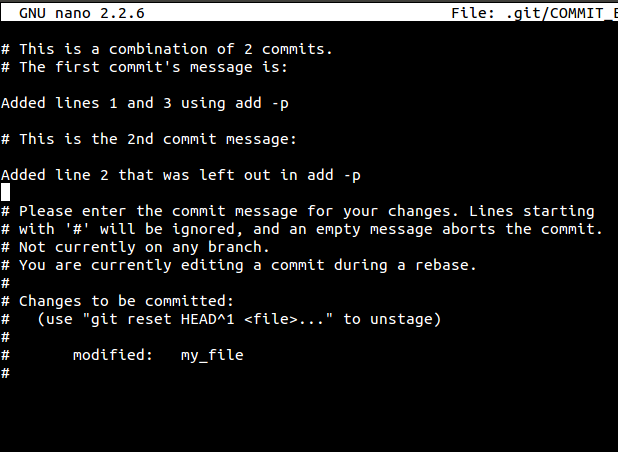 Let’s say you are working on a certain bug or a feature, and you are suddenly asked to demonstrate your work. Your current work is not complete enough to be committed, and you can’t give a demonstration at this stage (without reverting the changes). In such a situation, git stash comes to the rescue. Stash essentially takes all your changes and stores them for further use. To stash your changes, you simply run the following-

To check the list of stashes, you can run the following:

If you want to un-stash and recover the uncommitted changes, you apply the stash:

In the last screenshot, you can see that each stash has an indentifier, a unique number (although we have only one stash in this case). In case you want to apply only selective stashes, you add the specific identifier to the apply command:

Although reflog is one way of checking for lost commits, it’s not feasible in large repositories. That is when the fsck (file system check) command comes into play.

git fsck has an advantage over reflog. Let’s say you deleted a remote branch and then cloned the repository. With fsck you can search for and recover the deleted remote branch.

I have saved the most elegant Git command for the last. The cherry-pick command is by far my favorite Git command, because of its literal meaning as well as its utility!

In the simplest of terms, cherry-pick is picking a single commit from a different branch and merging it with your current one. If you are working in a parallel fashion on two or more branches, you might notice a bug that is present in all branches. If you solve it in one, you can cherry pick the commit into the other branches, without messing with other files or commits.

Let’s consider a scenario where we can apply this. I have two branches and I want to cherry-pick the commit b20fd14: Cleaned junk into another one.

I switch to the branch into which I want to cherry-pick the commit, and run the following: Although we had a clean cherry-pick this time, you should know that this command can often lead to conflicts, so use it with care.

With this, we come to the end of our list of tips that I think can help you take your Git skills to a new level. Git is the best out there and it can accomplish anything you can imagine. Therefore, always try to challenge yourself with Git. Chances are, you will end up learning something new! 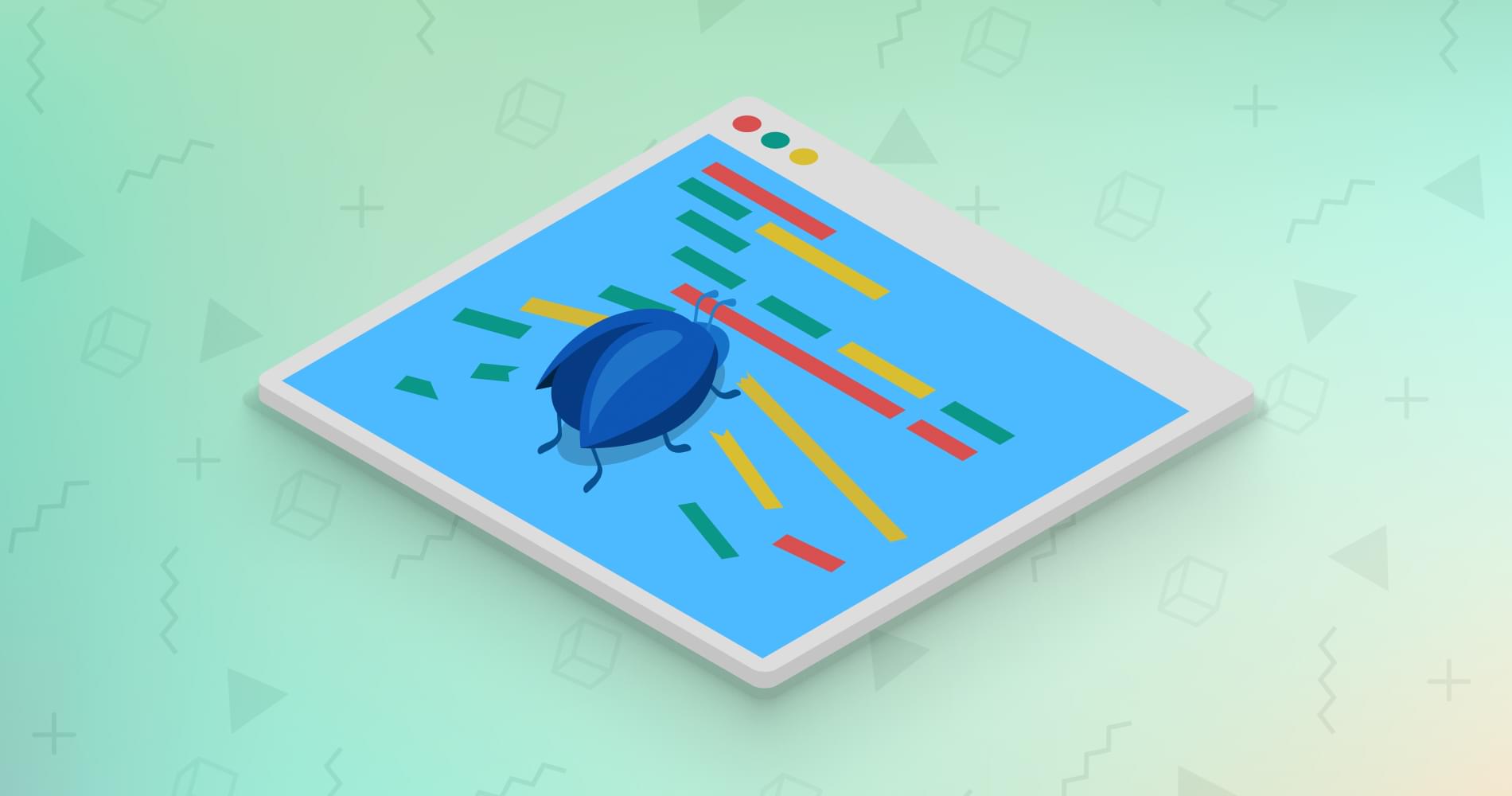 Beyond Console.log() – Level up Your Debugging SkillsChristian Heilmann

Taking Your Visual Content in WordPress to the next LevelSally Wood

SitePoint Podcast #129: Taking PHP to the Next Level with Lorna MitchellLouis Simoneau

Take your Blog to the Next Level!Melinda Szasz