It is a general tendency of human beings to resist change. Unless Git was around when you started with version control systems, chances are that you are comfortable with Subversion. Often, people say that Git is too complex for beginners. Yet, I beg to differ!

In this tutorial, I will explain how to use Git for your personal projects. We will assume you are creating a project from scratch and want to manage it with Git. After going through the basic commands, we will have a look at how you could put your code in the cloud using GitHub.

We will talk about the basics of Git here — how to initialize your projects, how to manage new and existing files, and how to store your code in the cloud. We will avoid relatively complex parts of Git like branching, as this tutorial is intended for beginners.

The official website of Git has detailed information about installing on Linux, Mac, or Windows. In this case, we would be using Ubuntu 13.04 for demonstration purposes, where you install Git using apt-get.

Let’s create a directory inside which we will be working. Alternately, you could use Git to manage one of your existing projects, in which case you would not create the demo directory as below.

The first step is to initialize Git in a directory. This is done using the command init, which creates a .git directory that contains all the Git-related information for your project.

It is important to note that if you do not set your name and email, certain default values will be used. In our case, the username ‘donny’ and email ‘donny@ubuntu’ would be the default values.

Also, we set the UI color to auto so that the output of Git commands in the terminal are color coded. The reason we prefix --global to the command is to avoid typing these config commands the next time we start a Git project on our system.

The next step is to create some files in the directory. You could use a text editor like Vim. Note that if you are going to add Git to an already existing directory, you do not need to perform this step. 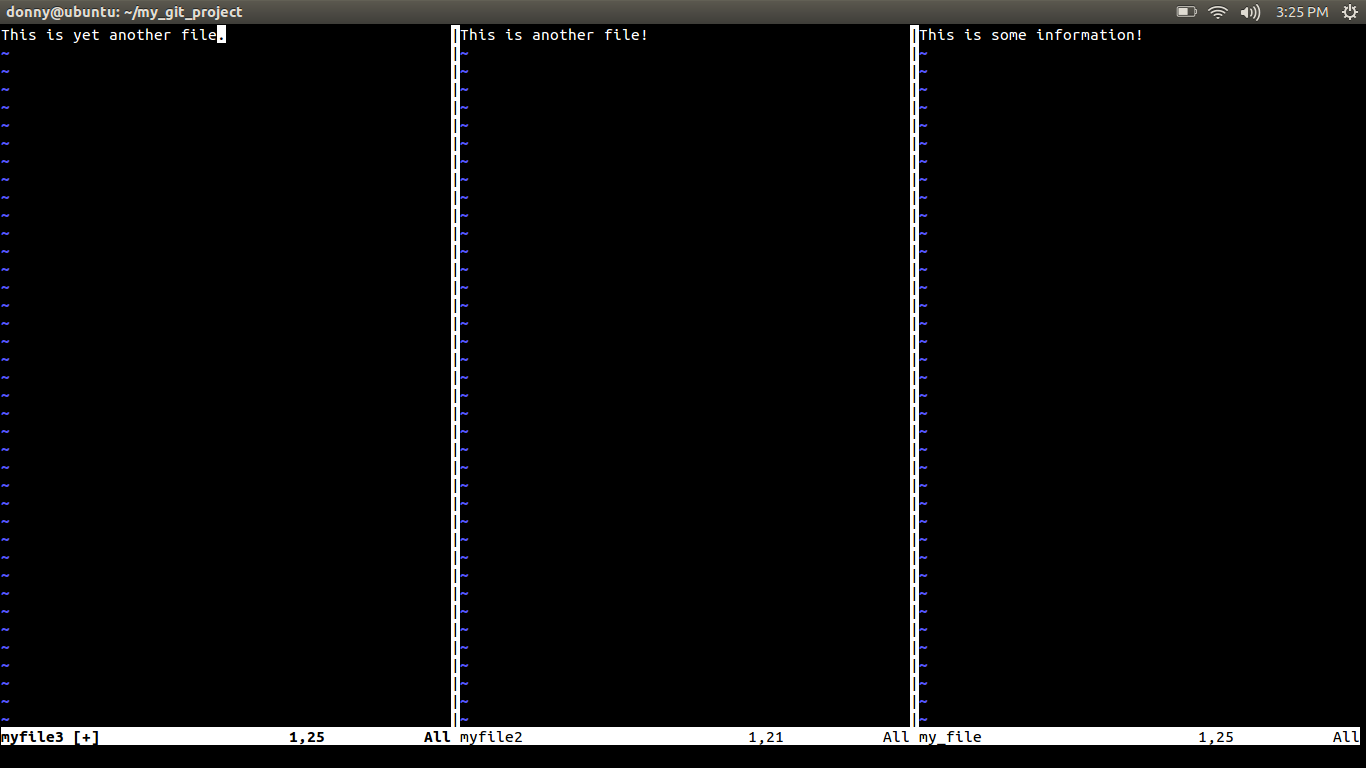 Check the Status of Your Repository

Now that we have some files in our repository, let us see how Git treats them. To check the current status of your repository, we use the git status command.

Adding Files for Git to Track

At this point, we do not have any files for Git to track. We need to add files specifically to Git order to tell Git to track them. We add files using add.

Checking the status of the repository again shows us that one file has been added. 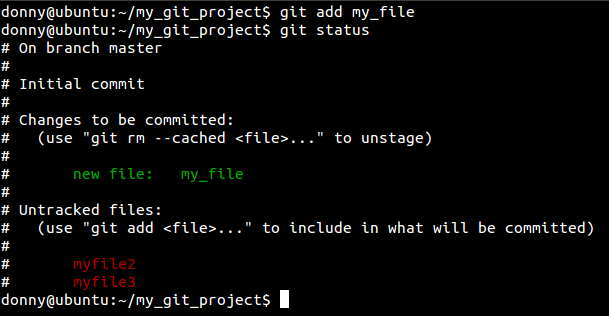 To add multiple files, we use the following (note that we have added another file for demonstration purposes.)

You could use git add recursively, but be careful with that command. There are certain files (like compiled files) that are usually kept out of the Git repository. If you use add recursively, it would add all such files, if they are present in your repository.

Let’s say you have added files to Git that you do not want it to track. In such a situation, you tell Git to stop tracking them. Yet, running a simple git rm will not only remove it from Git, but will also remove it from your local file system as well! To tell Git to stop tracking a file, but still keep it on your local system, run the following command:

Once you have staged your files, you can commit them into Git. Imagine a commit as a snapshot in time where you can return back to access your repository at that stage. You associate a commit message with every commit, which you can provide with the -m prefix.

Provide a useful commit message because it helps you in identifying what you changed in that commit. Avoid overly general messages like “Fixed bugs”. If you have an issue tracker, you could provide messages like “Fixed bug #234”. It’s good practice to prefix your branch name or feature name to your commit message. For instance, “Asset management – Added feature to generate PDFs of assets” is a meaningful message.

Git identifies commits by attaching a long hexadecimal number to every commit. Usually, you do not need to copy the whole string, and the first 5-6 characters are enough to identify your commit. In the screenshot, notice that 8dd76fc identifies our first commit.

Let’s now change a few files after our first commit. After changing them, we notice through git status that Git notices the change in the files that it is tracking.

You can check the changes to the tracked files from the last commit by running git diff. If you want to have a look at the changes to a particular file, you can run git diff <file>. 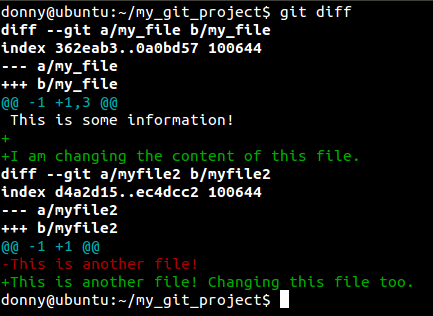 You need to add these files again to stage the changes in tracked files for the next commit. You can add all the tracked files by running:

You could avoid this command by prefixing -a to git commit, which adds all changes to tracked files for a commit. This process, however, is very dangerous as it can be damaging. For instance, let’s say you opened a file and changed it by mistake. If you selectively stage them, you would notice changes in each file. But if you add -a to your commit, all files would be committed and you would fail to notice possible errors.

Once you have staged your files, you can proceed to a commit. Im mentioned that a message can be associated with every commit, which we entered by using -m. However, it is possible for you to provide multi-line messages by using the command git commit, which opens up an interactive format for you to write! 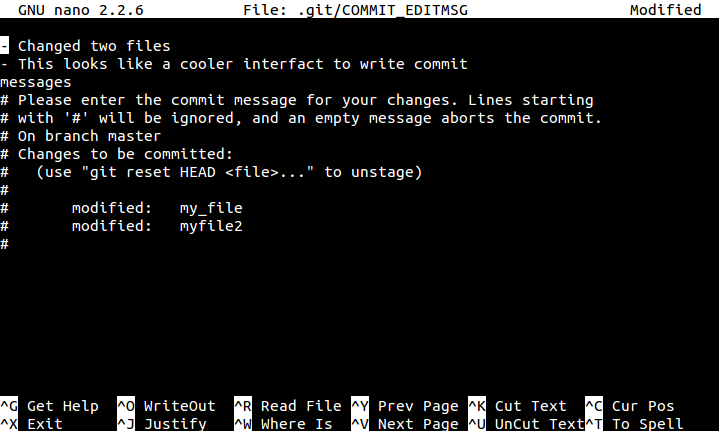 Managing of Your Project

To check the history of your project, you can run the following command. 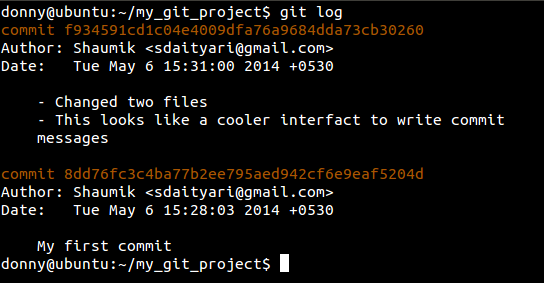 This shows you the entire history of the project — which is a list of all the commits and their information. The information about a commit contains the commit hash, author, time and commit message. There are many variations of git log, which you could explore once you understand the concept of a branch in Git. To view the details of a particular commit and the files that were changed, run the following command:

Where <hash> is the hex number associated with the commit. As this tutorial is for beginners, we will not cover how to get back to the state of a particular commit in time or how to manage branches. 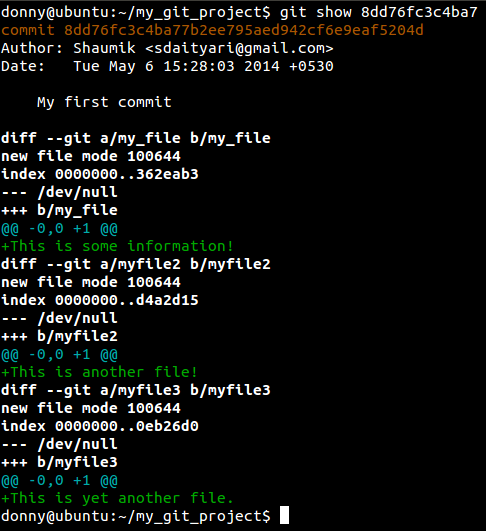 Putting Your Code in the Cloud

Once you have learned how to manage your code on your system, the next step is to put it in the cloud. Since Git doesn’t have a central server like Subversion, you need to add each source to collaborate with others. That is where the concept of remotes comes in. A remote refers to a remote version of your repository.

If you wish to put your code in the cloud, you could create a project on GitHub, GitLab, or BitBucket and push your existing code to the repository. In this case, the remote repository in the cloud would act as a remote to your repository. Conveniently, a remote to which you have write access is called the origin.

After you create a remote repository, you have the ability to add a remote origin and then push the code to the origin.

Git is full of features and we have covered just the basics here. I hope that this post helped you get started with Git. If you have any issues or questions about getting started, let us know in the comments below.