Whenever we talk about building a web application, we need to talk about language preprocessors (transforming source code written in a particular language to target code in a native language). Often you’ll find yourself using languages that aren’t natively supported by web browsers because they help you wrap away repetitive work by providing features not available in plain HTML (e.g. Jade), CSS (e.g. Sass) and JavaScript (e.g. CoffeeScript).

An HTML template engine is a preprocessor that gives us the ability to write dynamic and reusable HTML documents that follows the (DRY) principle of application design.

Jade is an open source HTML templating language for Node.js (server-side JavaScript). Jade is totally free to use and provides fast, easy, and fun HTML. It is heavily influenced by Haml, and it was originally created in Node as a module. It typically includes features common to most high-level programming languages, with an emphasis on processing plain text.

When using modern CSS frameworks like Bootstrap and Foundation, most of the development becomes entirely about producing HTML, which brings out the power of Jade. Once you start using it, it’ll become an indispensable tool for you.

In this tutorial I am going to introduce how to accelerate HTML production and inject plain data with Jade features in conjunction with Grunt.

Our toolset for this tutorial will include:

Here are the steps for installing Node.js, Jade, and the Grunt command-line interface (CLI). If you already have these installed, you can skip down to the next section in the tutorial.

NOTE:: There are three flags for installing npm packages:

A package.json manifest file will be created, which indicates a list of packages the project depends upon, and it includes some meta data such as project name, version, and description.

After the installation your package.json manifest will look like the following:

In addition, a node_modules directory will be created and will include the npm modules installed earlier as grunt and jade.

I’ll introduce you to Grunt, a popular task runner, we will use it to automate and execute time-consuming command line tasks in your development workflow. A task is an action that produces a target like compiling Jade to generate HTML. Using Grunt, we will be able to run Jade, watch tasks, and perform any other task with only one command line. It’s okay if you’ve never heard of a task runner before; it’s not a hard concept to wrap your head around.

Grunt is not the absolute best tool for this job. If you are curious about using other build tools, you can check out these resources: How to Use npm as a Build Tool or An Introduction to Gulp.js.

Grunt uses gruntfile.js to load any task and configure it with any parameters you need, as I’ll show you along the way.

Grunt tasks are configured by passing an object to the grunt.initConfig method, defining the affected files by the task and passing in a few other options. Learn more about Grunt.

The grunt.registerTask method defines a task that will be executed when we run grunt build via the command line. The array [jade, watch] indicates the tasks that will run respectively for accomplishing the build process.

To begin with, this is the minimum Gruntfile.js code:

Setting up the Grunt Jade Task

We’ll create our basic Gruntfile and put the following code inside it:

Setting up a grunt task needs fetching of the plugin by the npm registry and loading the plugin package, which contains the task through the grunt.loadNpmTasks method, so you can configure and execute them.

The previous task configuration will compile each Jade file individually and place the results in the build directory with a single index.html file.

Setting up the Grunt Watch Task

The Watch task is one of the most useful plugins. This will watch your changes, rebuild and proceed immediately automatically without the need to run the jade task each time we make a change.

To add the watch task, install the plugin using this command:

Then add its configuration to Gruntfile.js:

This will create a “watch” task for Jade files and the Grunt file. To complete this, you’ll also need to load the Grunt task and register the task:

Now when you run the grunt command it will accomplish the following tasks:

NOTE: The grunt command is a shortcut/alias for grunt default. It defines what tasks to be executed – jade and watch in our case – when we run the grunt command.

You can use the grunt-init-gruntfile scaffolding command for creating a basic Gruntfile. We will not need all its default tasks in this tutorial, so we won’t use it.

Execute the grunt jade command and the following structure will be created for you.

Jade is indentation and whitespace based, as each level of indentation creates a level of nesting elements in HTML. For illustration, the following code shows how the basic structure might look using Jade for producing an HTML document.

Using Jade, you don’t have to write closing tags, which helps avoid potential mistakes, such as forgetting to add closing tags or losing the correct order of them. Any text at the beginning of a line is interpreted as a tag. You need to use proper indentation for each tag.

Note: if the tag name is omitted, a div will be created as a default tag.

To add attributes to a tag, put them inside parentheses after the tag name and follow the name=value format. To separate multiple attributes, use a comma. In addition, classes and IDs can be written with . and # symbols respectively, as in the previous example.

Note: in order to see the changes you made in the Jade file by compiling it you need to run grunt based on the Grunt task we created before.

In the previous section, I gave you a quick overview of Jade’s syntax. In the following sections, we’ll go over some other common and powerful Jade features, along with a few more advanced ones. We’ll do this by going through a simple “job vacancies page” sample. You can find the full examples for each case in the source code files or from this GitHub repo. Let’s start!

The file called layout.jade will be the basic structure for our page’s layout, and this is a kind of DRY concept, as you don’t need to write these tags for each page. Instead you need to extend the layout and start to write the block content specific code, as we will see.

Blocks are kind of separating or organizing the layout. It can then be overwritten in another file.

NOTE: The CSS and JavaScript code are removed for brevity and focus. You can find these in the repo. Also, I’ve used the copy Grunt task for transferring the js and style directories from the app directory to the build directory.

Here is the layout.jade file:

You can create footer.jade and head.jade according to your needs. For our page, we will use Foundation and jQuery to help us establish some basic design and functionality.

Here is the partials/head.jade file:

Here is the partials/footer.jade file:

In the next snippet of code, we will create jobs.jade, which uses all the other files by inheriting our layout using the extends keyword and then overwriting the blocks that we need. In this example, we overwrite the content block.

But what if we don’t need to overwrite the entire block? What if we just need to add content instead? Let’s take block head as an example. We need to add a special script for this page in the header, so we will use the append or prepend keywords after block.

In the previous section, we included job-container.jade. In this section, we will look at the benefit of loops and mixins and how we can use them it in Jade.

Here is the initial version of a new code snippet:

As you see, we’re using multiple normal loop statements like the one on the first line - each job in jobs. The - character is used for unbuffered code that does not add any output directly.

In the previous snippet of code, there is redundant code that can become DRY-ier using mixins, as in the following code:

Here we’re creating a reusable block of Jade using the mixin feature. Mixins are like methods (or functions) that have names and take arguments to evaluate in their inner code. In the above example, we created a mixin called skillsBlock().

To use this mixin, we just write its name and pass the proper parameter values, prefixing the mixin name with a + sign to identify it as a mixin call.

NOTE: as in the above code, we can evaluate values either by =, != or #{}. But be careful when you use !=, which does not do any escaping, so is not safe for user input.

After establishing our environment, let’s do some awesome stuff with the combination of Grunt and Jade by passing JSON data from a JSON file to Jade using a Grunt task.

At first, create the JSON file data.json, and fill it with your desired data.

Then open Gruntfile.js and add the data attribute to the options of the Jade task, as follows:

The jobs data/locals (data passed to Jade templates are called locals) attribute will be passed to the Jade files identified in the files property and can be used in the Jade code. This manner gives you the ability to add text content to web pages easily.

Lastly, you can see how the page looks if you check out the demo. Of course, the source is compiled so the demo is of little importance in this case. A screenshot is shown below. 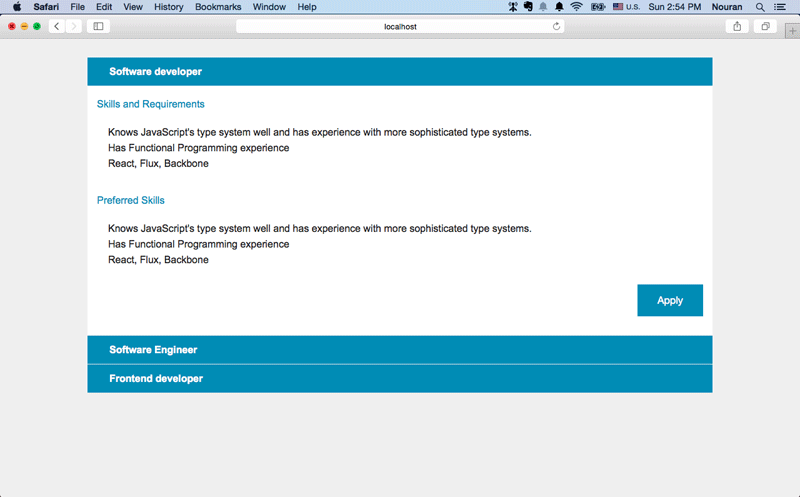 Reasons to use template engines may vary, but they can be categorized as more productivity, less repetition, and having a more pleasant syntax. Also, you might not want to write code in the native language because it is too repetitive, error-prone, or maybe you simply don’t like it. This is where a language like Jade, tuned to keeping your code concise and simple, comes into play.

Jade helps you write cleaner code, which makes it less tedious to do your job. We’ve covered some of the basics and tips and tricks using Grunt. There is more you can learn about Jade that we didn’t cover in this tutorial, so you can check out the official documentation for more.

Passionate web wizard focusing on web development using RoR and JS technologies, an all-round geek who loves reading and writing in technology, she is graduated from the faculty of Computers and Information Science, with Java and web development experience. She currently works as a Front-end Engineer at ta3rifah.com. 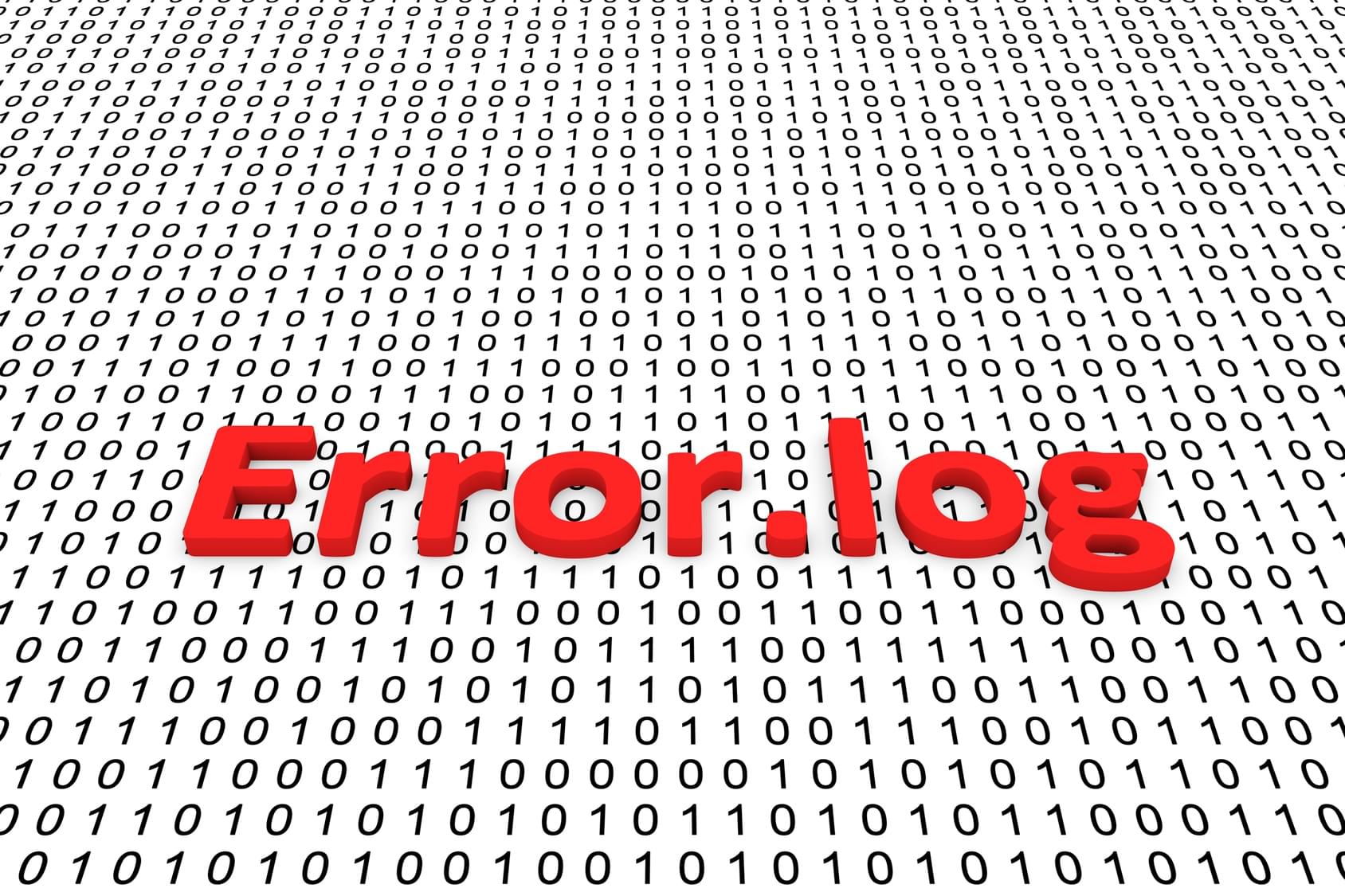