If you’re a Twitter user you’ve more than likely heard about or seen Swedish singer Robyn’s new music video. If not, then here’s what the fuss is about. The new online video is a 3D interactive affair which is integrated with Twitter. The song is called “Don’t F***ing Tell Me What To Do” and Robyn sings about all the things that are killing her, pretty much everything in her life by the sounds of things. The video features the words of the song twisting and turning through a minefield of colored shapes. I don’t have any 3D glasses so it all looked a bit fuzzy and a little harsh on the eyes, but if you are the lucky owner of a set of 3D spectacles you should get the special effect of words and shape leaping out of your screen. 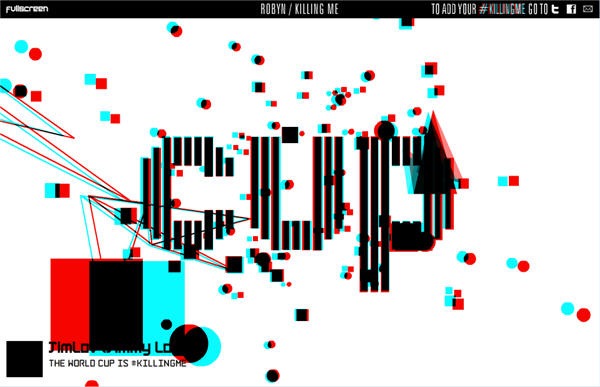 The second half of the video is where the Twitter integration comes in. Robyn (and the video makers) invite you to tweet about what’s killing you. If you want your tweets to be part of the video, all you have to do is to use the hash tag #killingme along with your gripe. So for example if you posted something on Twitter along the lines of “The lack of chocolate in my diet is #killingme”, your full tweet along with your twitter name appear on the bottom left side of the video. The word that comes before is #killingme will appear in the centre of the video.  The Twitter messages are pulled in randomly, so there’s no guarantee that your tweet will become a video star right after you send it, but it should end up on screen as some point. With each refresh of the URL, the Twitter messages are regenerated providing a unique video on every view.

The video was created by Swedish company Stopp and is written entirely in code. You can check out the video online at Robyn.com/killingme.

What do you think of the video? Is this the next big thing for music to integrate with fans online?