Wouldn’t it be cool to meet the people who’s online presence has helped make jQuery what it is today! These people have put in the hard graft writing heaps of jQuery tutorials which they have shared online to help us understand and become better jQuery developers.

Well, you’re in luck! I have made a list of what I think are the top 10 jQuery developers to hit the internet. Get to know the jQuery Gurus more personally and get inspired.

John Resig is the JavaScript guru who created jQuery. John is currently a developer for the Mozilla Corporation and is also an author hard at work on his second book, Secrets of the JavaScript Ninja which he plans to release in 2011. John is a frequent guest speaker at companies like Google/Yahoo and has presented at many conferences related to web technology. John’s blog has been running since 2003 and it is a popular choice (22,672+ RSS subscribers) for any JavaScript framework developer, especially jQuery. Seriously – what an absolute legend!
Website Link 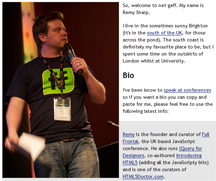 Remy Sharp is a web developer who has written many useful tutorials and plugins on his own blog. Remy is also the man behind the very useful website jQuery for Designers which has a handy easy, medium, hard search filter on posts. Remy is also one of the curators of HTML5 Doctor and Full Frontal with the latter being a one day JavaScript conference & workshop in Brighton (UK). Remy’s online presence started in 2006 and has risen continuously in popularity. This is one guy i would love to meet! 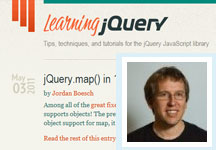 Karl Swedberg is a talented JavaScript developer who is the author of several Javascript books such as Learning jQuery and jQuery Reference Guide. Karl is the main person behind the popular Learning jQuery website where he has been sharing jQuery tutorials & tips for developers of all abilities since 2006. Karl is also the jQuery API Documentation Lead which i’m sure helps thousands of jQuery developers on a daily basis. Ben Nadal is the chief software engineer at Epicenter Consulting in New York. I really do like the effort Ben puts into his development blog where he shares in-depth articles about ColdFusion and jQuery (since 2006). I also really like the photos Ben adds to his posts, they give his website a great personal look & feel. Ben may not have the biggest following yet but this is surely a matter of time because he puts the reader first and he knows his stuff! Don’t agree? Ask Ben!

Cody Lindley describes himself as a client-side engineer (aka front-end developer) and recovering Flash developer. Cody is the jQuery expert who created the jQuery ThickBox and jTip Plugins and is a member of the jQuery UI developer relations team. Cody started his blog in 2009 where he shares an archive of web development posts. Cody is currently working for memolane.com as a Lead Client-side Engineer.

Marc Grabanski is a web developer who started his web presence in 2007 sharing web development tips and JavaScript/jQuery on his website which has receieved over 3 million visits in the last 4 years – awesome! Marc was also the initial author of the jQuery UI Datepicker, which is an awesome tool that is used by jQuery UI lovers worldwide. Marc has just recently anounced that he will be focusing on his job “President of MJG International” (read more on his LinkedIn profile). 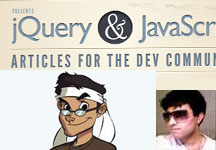 Addy Osmani is a keen web developer who was a product of the jQuery ninja era. Many of you may have seen his cartoon ninja persona on his blog (3,150 RSS subscribers) where he has been sharing jQuery and JavaScript articles since 2008. Addy is also a member of the Official jQuery core bug, docs & front-end fixing teams and an active participant on github where he contributes to current JavaScript projects. Good stuff mate!

James Padolsey is a freelance web developer who writes about JavaScript and jQuery on his website. At the moment James is living the life travelling and was working in Thailand teaching english for 6 weeks! (I wonder if they do much jQuery in Thailand, heh). James also has a personal blog where he shares some interesting thoughts… hmm…
Website Link

Sam Deering is a web developer who loves JavaScript, especially jQuery and has written literally hundreds of jQuery plugins. In 2010 came the revolution of Sam’s jQuery Blog where he shares daily jQuery tutorials/tips, plugins & code snippets. The blog is growing fast receiving over 300,000 unique visits in it’s first few months and continues to grow rapidly. Sam is currently working as a consultant Web Specialist for Flight Centre AU.

I hope you enjoyed the post and have learnt something about the guys who are trying to promote jQuery on the internet and help us all to become better jQuery developers!

HTML Email Testing — Read This Before You Hit SendAlex Walker