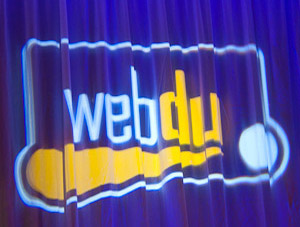 Kay Smoljak is reporting from the recent WebDU conference, of which SitePoint is a sponsor.

As a conference, WebDU is dear to the hearts of Flash, Flex and ColdFusion developers in Australia — up until very recently, it was the only event that specifically catered for their platform of choice. Starting out as MXDU, Sydney-based Daemon have been delivering a solid two day event focused around Macromedia/Adobe products for seven years. And they’ve been doing a damn fine job.

In recent years however, the WebDU team have added additional streams aimed at general web development and online user experience (and changed their name accordingly), as well as sessions about team work and some labelled “safe for managers”. Which brings us to WebDU 2009, back at Star City Casino, with five separate streams: Team/UX, Web I, Web II (not, as some might suggest, Web two-point-oh), Flash/Flex, and ColdFusion. That’s a total of 46 sessions over two days — and for the generalist attendee, the daunting task of choosing just 12 to physically attend.

The Fluff
There are two different types of opening keynotes from Adobe staff: there’s “look at what people are doing with our products” and there’s “look at what you will be able to do with the next version of our products”. With CS4 released fairly recently, this year’s keynote session saw Mike Chambers, Principal Product Manager for developer relations for the Flash Platform at Adobe, doing the former — showing off some funky leading edge things from out in the wild right now. A 3D sasquatch danced across the Mike’s screen, balancing on a sheet of paper he held in front of his webcam, courtesy of Augmented Reality and Papervision 3D; on the more practical side, there are a number of AIR-based Twitter clients and over 12% of tweets on the service come from Tweetdeck, an AIR app; and the New York Times use Flash and AIR to deliver specialised content and an enhanced experience as a value-add to their paid subscribers. The integration of AIR with the Facebook API will no doubt lead to some interesting applications — the Jackass “pranking” game shown off will definitely be one to watch.

The local Adobe office got a look in with Andrew Spaulding showing off a locally produced web/AIR hybrid music store, built by local developer Andrew Muller in a timeframe comprising weeks rather than months — an impressive effort. Andrew Muller later presented an entire session on AIR application development, drawing on his experiences with bandit.fm and other projects. 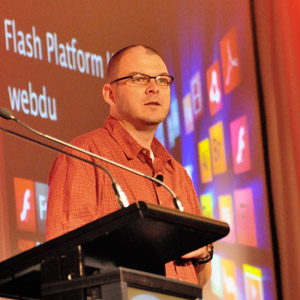 The plenary session then took at turn to the other “type” of keynote: sneak peaks of upcoming products, what every developer in the room was waiting to see. Adobe’s Steven Heintz showed off Flash Catalyst, the Flex skinning tool that Adobe have been demoing alpha versions of for quite a while now. Catalyst is a design to code tool for Flex — layered elements can be imported from Illustrator, Fireworks or Photoshop and applied to Flash components as skins. Steven showed a really fast but complete demo where he built a basic but functioning application in a matter of minutes, without writing any code — to many oohs and ahhhs from the audience.

Catalyst will be the tool that stops Flex applications from looking like Flex applications and start to give designers some freedom to innovate, and will no doubt make a big splash in the RIA sphere. What was interesting was that I hadn’t realised, up until now, that Catalyst was Eclipse-based — from what I saw onscreen it certainly doesn’t look or behave like an Eclipse IDE, but rather like part of Creative Suite. A public beta is apparently going to be available at some point in the not-too-distant future so everyone can get their hands dirty.

ColdFusion, the comeback kid
The keynote wasn’t all going to be Flash, however. Next up, Terry Ryan, new to the ColdFusion evangelism team but certainly not new to ColdFusion, showed off Bolt, the long-awaited Eclipse-based IDE for ColdFusion, and some new features that will be included in the forthcoming ColdFusion 9. He started off by admitting that Adobe has a bit of an image problem with CF, but that the platform was far from stagnating with over 700,000 developers world-wide. He then quickly demoed some of the code generation features in Bolt that tie into the ORM features new in CF9 with Hibernate.

Time was running out but the point of the keynote was clear: Adobe’s aim is to have a complete workflow for rich internet applications deployed to the browser via Flash player or the desktop via AIR: from design tools like Photoshop, Fireworks and Illustrator; through Catalyst, which is a kind of rapid prototyping tool; into Flash Builder (the renamed Flex Builder) for writing the hardcore ActionScript; and Bolt for writing the backend services code to interface with ColdFusion server. 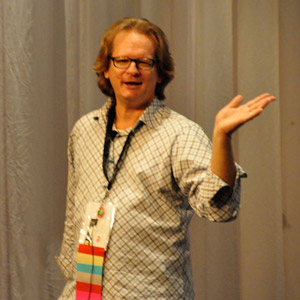 Other sessions throughout the day presented opportunities for this developer to nourish and indulge her inner geek: Kai Koenig contemplating the state of play with web services (conclusion: interoperability still sucks!), Dennis Clark demonstrating dependency injection with the ColdSpring framework for ColdFusion, and Phillip Tellis showing us how to get down and dirty with Yahoo pipes, remixing and republishing RSS feeds in a rather dry but example-heavy session. Particularly cool was Andrew Muller’s 98 cups of Tea, an interesting session which ran over tips and tricks for developing AIR applications from someone who has built some very successful ones. My favourite take-away from Andrew’s session was to include automatic updates in your application, right from the beginning — it only takes a few lines of code, and makes sure that throughout development your client and testers always have the latest version of the app. Smart thinking!

The day ended with birds of a feather sessions on AIR, mobile development, and ColdFusion, where groups of like-minded developers had a casual discussion on topics of interest, led by one of the speakers. Then it was off to Oscars Lounge Bar, a short walk away, for drinks sponsored by Gruden.

Stay tuned for a wrap-up of Day 2!

Understanding and Working with Submodules in Git
Programming

Git has a lot of power under the hood. Learn about submodules in Git, including what they are, how they work, and why they're so useful.

Keyboard shortcuts help you work faster. Learn some of the most useful Visual Studio Code shortcuts for Windows, Linux and macOS.