Back in June, Ektron and SitePoint jointly sponsored the State of Web Development 2006 survey, polling the people who actually build the Web to discover the truth about the technologies and practices being used by the community. The survey asked people about their jobs, the tools they use, the platforms they develop for, and the practices they apply to their design and development tasks. In this article, we present an overview of the survey, the data collected, and the sorts of information that can be extracted from the data with deeper analysis.

The survey was a great success: more than 5000 people responded, probably making this the most comprehensive survey of web developers ever conducted. There was a major prize — the chance to win a 20″ widescreen flat panel display from Dell — and every respondent gained access to the information revealed by the survey.

If you didn’t enter, you’ve definitely missed out on the chance to win the prize (congratulations to Jerry Sullivan, Principal of NavillusWebWorks in South Yarmouth, MA!). However, you can get the survey results; they’re free, with the compliments of Ektron and SitePoint.

Some of the results were reasonably predictable. For example:

There were also a few surprises in the results. For example:

When those of us here at SitePoint realised how much data the survey had actually collected, we wondered whether there was a way of digging deeper into the responses to gain fresh insight into the way the web development community is thinking.

Several of us spent over a month sifting through the data, looking for patterns, and documenting our findings. We discovered some definite trends in terms of the ways in which people work, the technologies they use, and the sources they tap to obtain information. We’ve published the results of this research as a PDF report, which is available for purchase from sitepoint.com.

The approach we took was not just to look at the answers to individual questions, but to correlate the answers given to combinations of questions, and thereby, to find “hidden” relationships.

Let’s look at an example to see how this works. Consider these two statements:

The survey results show that:

Would you care to guess whether or not there was any relation between these two statements? It’s not obvious, is it? Let’s find out!

We can write the answers in a simple grid like the one shown below, so that the totals represent the overall responses to each question. The totals actually vary slightly from the figures quoted before, because not every person answered every question and, as such, we had to drop some of the data for some parts of the analysis.

Now, if we assume for the moment that the answers to these two questions were completely independent, we can calculate the number we would expect to find in each individual cell of the grid. Since 11% of people use a commercial CMS and 58% use online forums, we would expect to find that about 58 x 11/100 = 6.4% of people use both. Applying the same reasoning to the other cells (and glossing over a few rounding issues) we can predict the number we would expect in each of the remaining cells in the grid, assuming the answers to the two questions are independent. 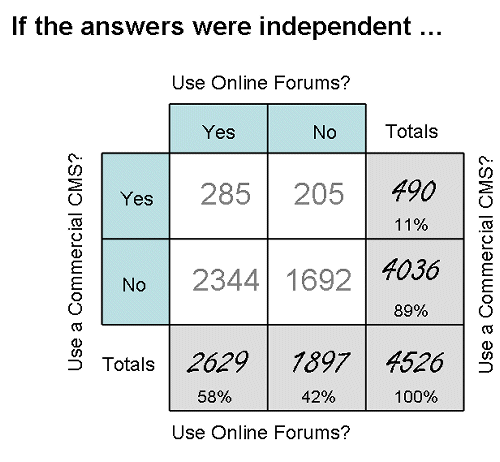 That’s what we expect to see. But what does the actual data show? The answer to this question is achieved by simply counting the individual responses and recording the result in the appropriate cell in the grid. 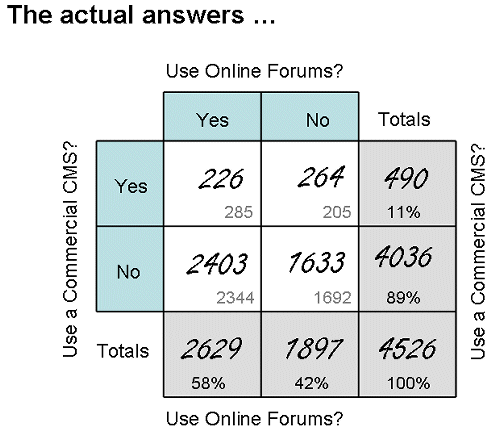 You can see at once that the numbers are different. But before we attach any significance to the difference, we have to answer an important question: could the difference simply be due to chance? After all, if you tossed a coin 10 times you might expect to get 5 heads and 5 tails, but you wouldn’t conclude the coin was biased just because you got 6 heads and 4 tails; that outcome is quite likely through chance alone. (It would be quite a different story if you tossed the coin 1000 times and got 600 heads.)

Fortunately, there are standard tests for statistical significance that can be used in situations like this. In this analysis, we’ve applied Yates X2 (chi-squared) test, which allows us to conclude that the difference between the actual data and the expected values is extremely unlikely to have occurred by chance (much less than 1 chance in 1000). So we can be confident that the answers to these two questions collected in the survey are not independent at all: they are related in some way.

Note that saying that the two answers are not independent is not the same as saying that one causes the other — both statistics could be caused by other factors. Neither does saying that something is statistically significant mean that it is actually important to us in the real world.

Is this useful information? Well, that depends on your situation.It could be quite important knowledge if you were planning to market a commercial CMS through online forums. (Hint: consider other channels such as conferences, user groups, and, to a lesser extent, magazines.)

This is the type of analysis we applied to the data collected from the State of Web Development 2006 survey: we paired up the questions and looked to see if there were statistically significant correlations between the answers given. To give just a few examples, we learned that:

In the published analysis of the survey data, we’ve listed more than a thousand of these linked statements — some of them rather obvious, others more interesting — together with the strength of the trend and its statistical correlation. We’ve also published the raw data (with personal information removed, of course) and the intermediate analysis products for those who want to perform their own analyses.

The analysis turned up so many strong correlations between answers to the various questions that we started to look for reasons that might explain them. Warning: at this point, we leave the realm of statistical analysis and move into opinion and educated guesswork!

One theory is that the technologies and practices that people use tend to form natural clusters. For example, if you’ve done a lot of work with PHP, the theory suggests that you’ll tend to be more comfortable with open source tools, and therefore, you might be more likely to be thinking about trying Python or Rails and less likely to be considering ASP.NET. And, since open source tools are generally supported through community tools such as forums and blogs, you’ll be more comfortable with these tools, too.

That’s not a particularly radical idea, but the survey data actually lets us identify some of these clusters of related practices. As we explored the data, we found that the clearest clusters represented stereotypes of different types of web developers, so we gave them names:

We can’t make absolute predictions about what these different groups think, but we can identify clear trends. Our “Entrepreneur,” for example, is most likely to say that he or she:

And the same person is least likely to say that he or she:

For the record, the correlation we used as an example earlier can be explained by noting that the use of commercial content management systems and a tendency not to rely on online forums are both characteristic of the “Corporate” stereotype.

A complete profile for each of these stereotypes is contained in the published analysis, along with:

That brings us to the end of this tour of the Ektron-SitePoint “State of Web Development” survey. Even though we’ve only had time to touch on a few highlights, we hope this article has shown that there is a wealth of valuable information contained in the survey results.

If you’d like to pick up a copy of the 2006 survey results, you can download it for free.

And if you feel like digging deeper, you can purchase access to the complete survey data (with respondents’ personal information removed), together with our analysis of the data. This report comes complete with insightful commentary, as well as tools for performing your own analysis — we believe it to be the most comprehensive snapshot of the state of web development today.

Nick Langmaid started in the information technology industry in 1976 as a mainframe systems programmer. In the 30 years since, he has worked for many companies, large and small, designing and implementing systems to satisfy their business needs. Nick is the principal consultant at Solution Space, and specializes in requirements management and software system design. In addition to working with the SitePoint team, Nick is currently working with one of Australia’s largest companies to use web technologies to extend and modernize its retail point-of-sale operations.