This article was sponsored by AppFog. Thank you for supporting the sponsors who make SitePoint possible.

In this article, I am going to take the application from the previous article to the next architectural step, namely, separate repository and application servers. CenturyLink offers AppFog, which is a Platform as a Service (PaaS) like Heroku, so it makes sense to move the Rails application there. The application database will be moved from SQLite to PostgreSQL. The PostgreSQL instance will be created on a Bare Metal server, so this application is going to grow up, just a bit.

Here’s a simple image that shows the new architecture: 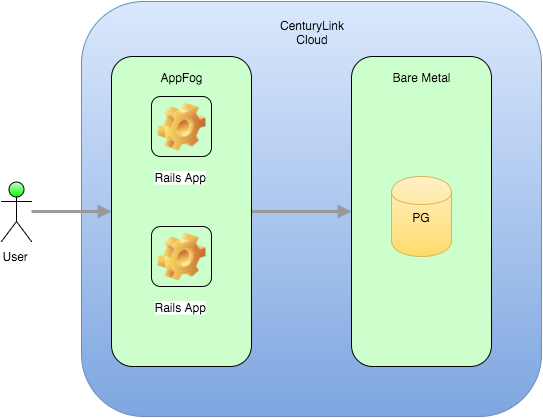 Refer to the first post to sign up with CenturyLink and make sure Bare Metal is enabled.

If you’ve followed the first tutorial, then you know how to deploy a Bare Metal server. Here, I’m going to deploy a new one for our PostgreSQL database. I want to add the new server to the existing VA1 – US East deployment (created in the first article), so I click the hamburger icon for that region: 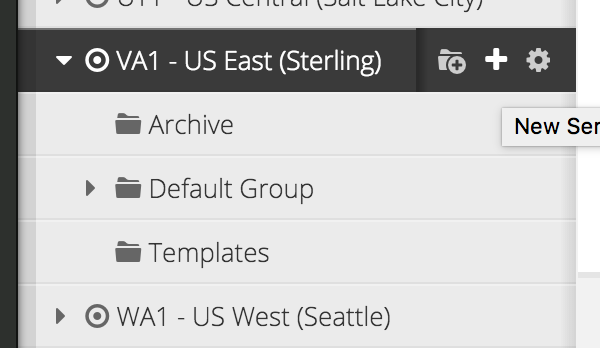 From this point forward, it’s really just a matter of picking some basic options:

It takes a few minutes for the provisioning to complete. Again, this is the same process described in the first tutorial, so refer to it if needed.
Looking at the dashboard, I now have a new Bare Metal server called VA1SPGGSPPG202. Your server will have a different name. Let’s get PostgreSQL installed on it. We’ll need to SSH into the box for the installation, which means assigning a public IP address and opening the appropriate ports. The default port for SSH is 22, as we all know. Remember that PostgreSQL is going to be on this machine, which uses port 5432 by default.

The provisioning of the public IP takes a few minutes. Adding a public IP is not a security best practice. Do not do this in a real production scenario. You’d at least want to restrict the source IP to your application servers for this box. More likely, a private virtual network is merited where only your servers can see your servers and the application server is the single point of entry. Even when following tutorials, you should get in the habit of using the VPN that is provided for you when you create the server. For the sake of keeping the tutorial succinct, I’ll refer you to CenturyLink’s instructions on setting up a client VPN.

CenturyLink offers many options for securing network access, so check the documentation for more or contact CenturyLink support for assistance with these options.

Once the public IP address has been added, SSH into the box using the username and password (available on the dashboard entry of the server).

You can verify that PostgreSQL is working by switching to the postgres user and running psql:

Yup, all good. However, the postgres role is associated with the postgres Linux user (this is called “peer authentication”) and is somewhat privileged. As such, let’s create a role that we can use for our application. Exit psql by typing \q so you’re back at the Ubuntu command prompt and then type:

This opens the file in vi. By default, PostgreSQL is configured to use Peer Authentication only, but we want to use Password Authentication. Find the following line:

Also, add the following line to the file:

This enables PostgreSQL to accept incoming connections from remote hosts.

Next, PostgreSQL needs to be configured to listen for remote connections. This is done in the main configuration file:

Find the line with listen_addresses, uncomment it, and change it to:

Note: These are not recommended security practices for a production PostgreSQL instance. This is intended purely as an illustration of a dev PostgreSQL environment.

Back at the command prompt:

You should now be able to login using that user and psql:

We’re ready to set up our Rails application on AppFog.

The GitHub repository for the Rails application is here. I have created a branch called appfog-application for the changes needed in this article. There aren’t too many.

Login to AppFog with the CLI. You’ll need the URL from the region where you enabled AppFog. Mine was in US East, and looks like: 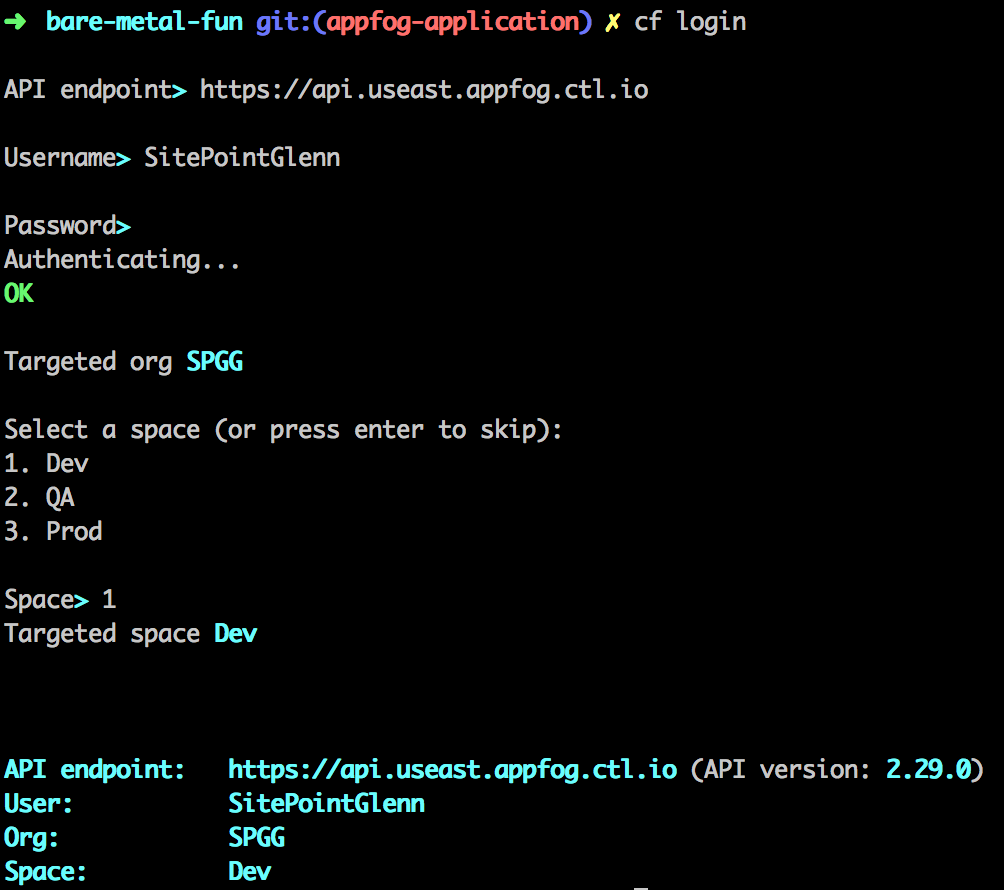 Since the app is moving from SQLite to PostgreSQL, remove the sqlite gem and add the pq gem. Also, capistrano is no longer being used, so remove all those gems.

Let’s configure the application to point to our newly-minted PostgreSQL instance.

For the sake of this example, I am using the Bare Metal database server for all environments. If you’re following along, you’ll need to set an environment variable called DB_PASS to your database password. Once you’ve added this configuration, you can create and migrate the databases:

You should now have a things_development database in your PostgreSQL instance.

It’s a good idea to add the database connection string as an environment variable to our app. One way to do that is to use the cf set-env command:

There are a few options when migrating the database. One way is to call cf push with a different “start” command, like so:

This will create and migrate the database.

Open your app URL in the browser and see your Things Server in action. 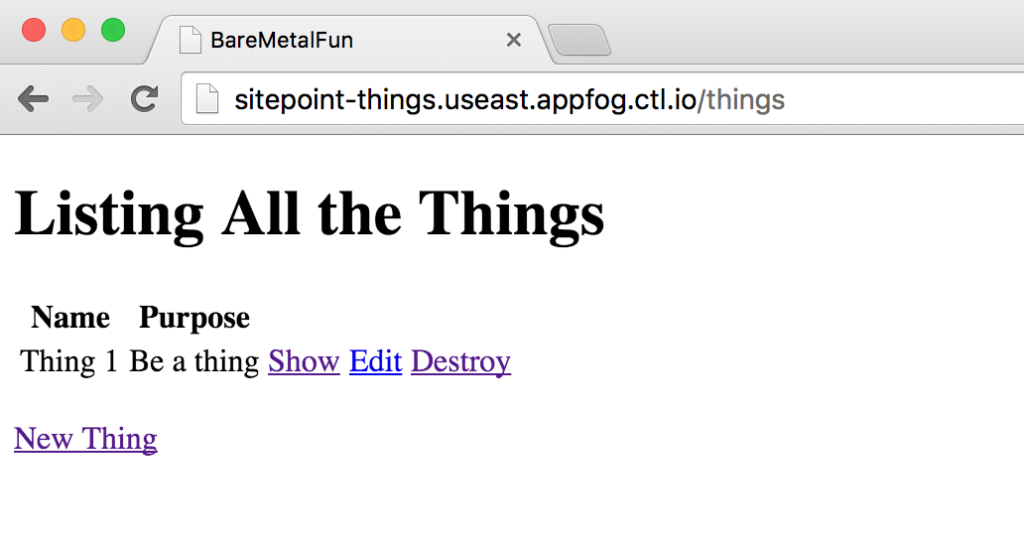 Excellent. We now have a Rails application hosted on AppFog using a PostgreSQL database that is, in turn, hosted on a Bare Metal server.

Admittedly, this tutorial is foundational in nature. It exposes only a part of what the CenturyLink Cloud Platform has to offer. In fact, it only really shows bits of AppFog and Bare Metal. There are a number of next steps you can take from this point:

The CenturyLink Cloud Platform is a vast offering of cloud-based hosting and services. It is certainly worth investigating if you want a solid platform that can control all your application and infrastructure needs under one umbrella. Also, Bare Metal servers are a new and intelligent approach to VMs that need isolation but can be provisioned quickly.