After e-commerce and social media, the next big thing has arrived — internet-enabled devices, otherwise known as the “Internet of Things” — and WordPress is ready to embrace it.

This revolutionary paradigm shift is set to transform every aspect of our lives, from optimizing our homes to the way we travel. Though the Internet of Things has already made its way into home automation, it hasn’t quite taken off with WordPress integration.

Let’s put everything into context before we get started.

An Overview of the Internet of Things

The Internet of Things is about connecting internet-enabled devices that relay information back to us, to cloud-based applications and to each other (device to device). These ‘smart’ devices can be anything from mobile phones, fridges, washing machines to wearables, medical equipment or jet engines. – TechWorld

When we talk about IoT devices, the most common example that pops into mind is home automation appliances such as lightbulbs, refrigerators, toasters, and espresso machines. However, the effect of IoT is also visible in smart cities and farming. The smart devices connect with the outer world by means of a wireless connection which can be established through Wi-Fi, RFID, NFC, or even Bluetooth.

Kevin Ashton is often attributed as the inventor of the term “Internet of Things”. Although we’ve only just been hearing the term for the past decade or so, the concept first originated back in the 70’s and was referred to as pervasive computing or the embedded Internet.

After several tries, IoT has finally moved past all the hype and into today’s modern technological infrastructure. Nevertheless, it started out gradually with the first Internet-enabled device created in 1990 by John Romkey a year after the advent of the World Wide Web – the Internet toaster.

The first IoT device was created a year before the first web page!

According to IoT Analytics, the term Internet of Things was given to this revolutionary phenomenon in 1999 by Ashton with a purpose to promote RFID technology. IoT has grown rapidly in the last few years which is in part thanks to the cloud. If you’d like to know more about how IoT started out and how it took off, check out this timeline piece by Postscapes: A Brief History of the Internet of Things.

How Big Is the Internet of Things?

You might have heard that ‘the Internet of Things is far bigger than you realize’ thrown around. But how big is it really?

IoT is making huge advancements in almost every industry with connected devices ranging from light bulbs to espresso makers and indoor heating to livestock. Its implications in WordPress is finally possible with various implementations surfacing. One of these technologies is the WP REST API which works to make IoT integration with WordPress infinitely easier. We’ve covered the WordPress REST API previously on SitePoint for those who are interested:

“With billions of devices out in the wild chatting away to each other, the future of the web is obviously going to be heavily dependent on having clear protocols and open APIs available to facilitate that communication – which is exactly what the REST API is designed to do.” – Tom Ewer, WPMU DEV

Phenomenal Implementations of the IoT in WordPress

Combining WordPress with popular automation services you can improve user experience and work towards generating user engagement and interactivity. Here are a few case scenarios are taken from RC Lations’ WordCamp Maine:

Several different services allow webmasters to connect real-world devices with their WordPress sites. Webmasters can use these systems to integrate their website with all kinds of IoT devices. In this section, we’ll take a look at four of these services and highlight the features they offer users.

littleBits consists of electronic building blocks that can be used to invent all kinds of new devices and then connect them to the Internet through the platform’s own API.

The electronic building blocks are color-coded which makes them super easy to use, magnetic which makes it convenient to join with one another and reusable which saves means that you can use a set of building blocks to create several different inventions.

littleBits empowers users to invent everything from smart home devices to remote controlled cars and spin rollers to doodle wizards. As of now, the littleBits library consists of 60 modules that can be connected with the others in virtually millions of different combinations so you never run out of things to invent.

The best part about littleBits is that it enables users to easily create modular IoT devices very easily. Users can then automate or control these devices through the littleBits’ built-in dashboard or create custom integrations with the littleBits’ API. 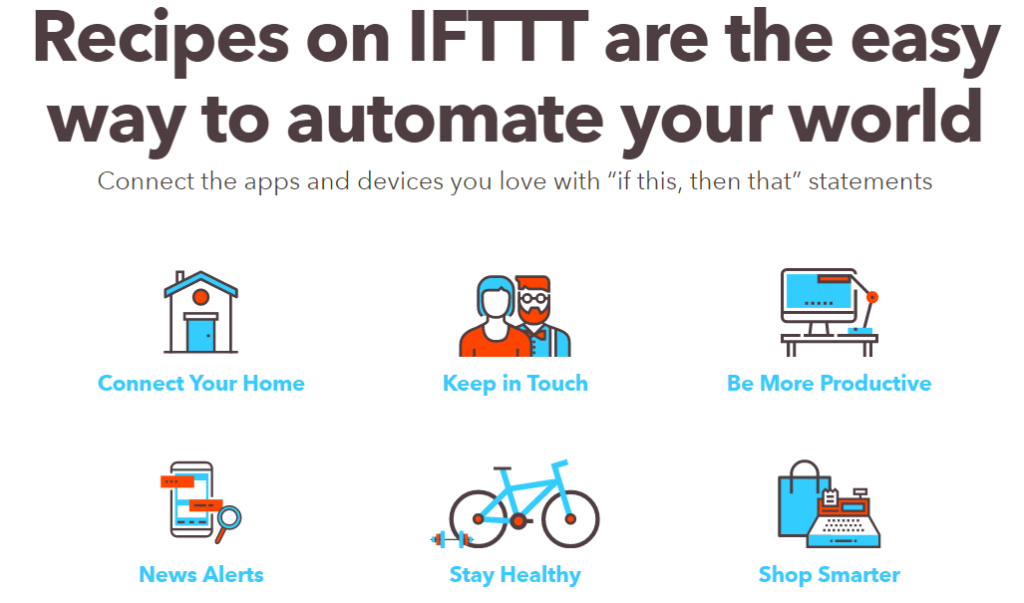 IFTTT (If This Then That) opens up many creative possibilities for inventors by empowering them to establish simple If-Then connections with apps and real-world products which they call recipes. Currently, there are two types of recipes – DO recipes and IF recipes.

Users can customize the DO recipes to create buttons, cameras, and notepads and then initiate them with a simple tap. DO recipes have to be initiated by the user explicitly whereas IF recipes run in the background automatically. For instance, users can configure a recipe as:

As of now, IFTTT is compatible with 321 channels including WordPress, MailChimp, Workflow, Slack, littleBits, Particle, and 13 different social networking platforms. Here’s a complete list of the channels you can establish recipes for with IFTTT.

IFTTT aggregates the channels of your choice in one place and then allows users to create recipes to integrate them to achieve a goal. Every recipe involves two web applications – one to set off the trigger and the other to perform the given action. IFTTT is incredibly easy to get started with and its intuitive interface allows users to create recipes even if they aren’t particularly programming literate. RC Lations has developed a littleBits plugin for WordPress to help webmasters get started with the platform.

WordPress enables webmasters to connect their site – whether it’s free or self hosted – to IFTTT and use it as either a trigger or as an action. As of now, there are two triggers and two actions available for the IFTTT-WordPress integration.

You can get started with the IFTTT-WordPress integration by connecting the service to your blog. Be sure to check out these posts on Using IFTTT With WordPress and How to Automate WordPress and Social Media with IFTTT.

Particle is a popular service that enables users to transit between prototype to production and build an Internet of Things product. The service provides users with a cloud-connected hardware development kit that makes it easy to prototype their ideas.

Every product starts as a prototype. Our hardware development kits — the Photon (Wi-Fi) and the Electron (2G/3G cellular) — help you build your first IoT prototype in minutes. – Particle

The standout feature in Particle is that the IoT devices you engineer are essentially powered by a real-time, secure, and scalable cloud platform. The service also features a premium-quality Device Management dashboard that lets you control and manage your collection of products, deploy firmware updates, gather data, and integrate them with other services.

According to their website, the easiest way to get started with an IoT product is an open-source development kit. Particle has the technology in store to enables users to create their own IoT devices that are pre-loaded with the firmware libraries and connected to the cloud.

These are some of the most popular services out there that allow WordPress users to integrate their website with IoT devices in order to deliver more value.

IoT and the WP REST API

The WordPress REST API fits perfectly into this new era of the integration of Internet-enabled devices with WordPress by allowing web developers to establish a direct communication pathway to transmit and receive data.

IoT and WordPress in the Real World

wpForGlass, the brainchild of Weber Shandwick’s digital innovation team, is one of the earliest IoT implementations for WordPress that was developed exclusively to work with Google Glass. This plugin allows webmasters to post directly to their WordPress site from their Google Glass.

Be sure to check out this video which illustrates how wpForGlass works.

The plugin works by employing Google’s Mirror API and allows users to post photos and videos taken with Google Glass directly to their blog. Setting up this plugin requires some technical knowledge to configure the relevant Google Mirror API.

Nike+ is a WordPress plugin that focuses on health by letting you keep track of your running process and then displaying them on your website – complete with widgets and shortcodes. The plugin was designed to work with both individuals or team sites.

Although the plugin hasn’t received updates in the past few years, Nike+ was one of the very first IoT implementations developed for WordPress sites.

In the near future, most of our devices will be connected to the Internet.

Popular services make it possible for WordPress webmasters to get started with the Internet of Things right away. We encourage you to try them out for yourself and see which one works best for you.

What would you create with an IoT-WordPress pairing? Let us know by commenting below!

Maria is a computer scientist, professional writer, and content strategist. She's also the Editor-in-Chief of BloggInc. She provides high-quality articles on a wide range of topics including WordPress, technology, and web design.