Google Fast Flip, the latest offering from Google Labs. It’s received massive media coverage, but that’s probably not surprising given that media companies have the most to gain.

Fast Flip is Google’s attempt to present recent news, headlines, and popular articles like a printed magazine stand. You can browse screenshot thumbnails of stories from your favorite publishers, authors or topics. The system currently features pages from several dozen (mostly) US-based news corporations but more will be added over time.

Google hopes to improve its relationship with newspaper and magazine companies. Many have attacked Google for aggregating content it did not create, but the majority of Fast Flip’s advertising revenue will be passed back to the publishers. According to Marissa Mayer, Google Search vice-president:

We have tried to build platforms and tools that build a healthy, rich eco-system online that is supportive of content. This is a new way of looking at content.

Google believes that Fast Flip solves issues associated slow browsing; it allows users to seamlessly flick through articles without unnatural delays. Is that really a problem and has Google cracked it?

The opening screen shows four configurable article sections with multiple tabs representing topics or sources. Each section contains a horizontally-scrolling area with article screenshot thumbnails. I’m not convinced the thumbnails are effective; they’re too small to be readable and few news stories contain helpful or relevant photographs. The headline text is shown below but it’s easy to miss it (the text is grabbed from the page’s <h1> tag; it works most of the time, but some publishers are better than others): 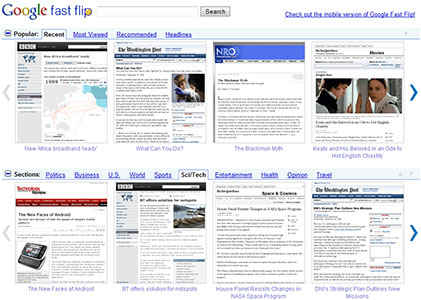 Clicking the thumbnail takes you to a larger and more readable screenshot. I initially found this a little bizarre — I’d expected to be taken to the actual article. However, it does allow you to read more of the story, quickly scroll to other articles, or use the pull-out navigator widget. It also provides Google with space to show advertising: 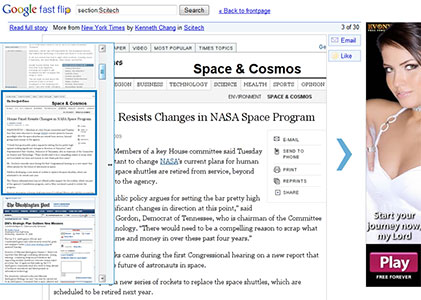 Finally, you can browse a series of stories from your chosen publisher or topic: 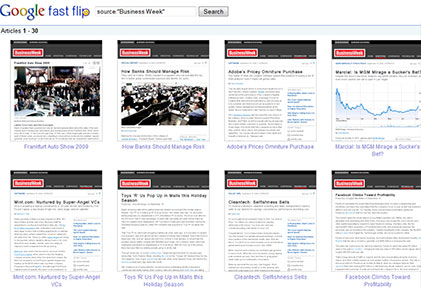 The interface is usable, although it works best on screens with a high vertical resolution. It looks cramped on a browser running on a 1024 x 768 screen. I suspect Google will address that issue, especially when they start supplying Chrome OS on netbooks.

Fast Flip works in most browsers, including IE6 and several mobile devices (they’ve not published an official browser support list). JavaScript is required but it would be relatively easy to create a HTML/CSS-only version — perhaps Google will do that if the system becomes popular?

But is there a need for Fast Flip? Will anyone use it? For years, techies have been aggregating their own topics using RSS; many feed readers and personal home pages offer a quicker and easier browsing experience. However, I accept that RSS has never been widely adopted outside the technical community. Could Fast Flip be a viable alternative to those users?