Despite being just 2 years old, Chrome has reached version 6. On average, Google release a new version every 4 months and version 5 appeared at the end of May 2010.

Call me a cynic, but I’m convinced the rapid release schedule is pure marketing hype. By the time Internet Explorer 9.0 finally arrives, Chrome will be at version 8 and will quickly overtake Microsoft’s browser. Although few people care about the numbers, it doesn’t stop journalists and bloggers like me reporting that a new version is available. How many news stories appeared about Firefox 3.6 or Opera 10.6? They had more new features, but the version numbers didn’t seem so important and they received far less press coverage.

Enough about the marketing conspiracies — what can Chrome users expect from the update?

New default theme
Chrome’s always been clean, but the new theme is subtler and more minimalistic than before. The window is transparent gray on Windows 7 and there are even fewer distractions. 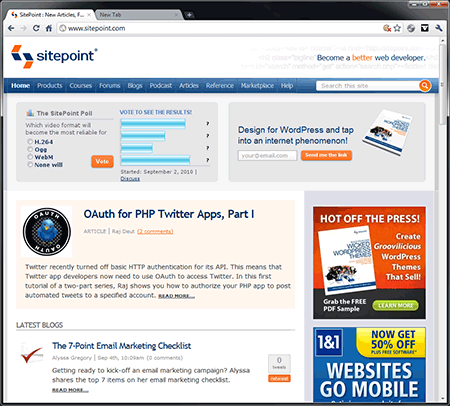 Some of the menus have been combined, for example, Cut, Copy and Paste are on a single line. There’s also a new “Create application shortcuts” option which allows you to add web links to your OS desktop or menus.

Form Autofill
It’s taken some time for autofill to arrive on Chrome, but Google has an interesting implementation. Rather than simply associating strings with similarly-named input fields, Chrome remembers sets of addresses and credit card numbers. It works well and form details can be entered with a single click.

Synchronized extensions
If you’re using Chrome on more than one PC, you’re probably syncing bookmarks, passwords and possibly themes. The new version adds automatic synchronization for autofill and extensions. It makes Chrome quicker and easier to install when you upgrade your OS or switch platforms — there’s less reason for you to shop around for another browser.

Improved address bar
Google may call it the “Omnibar” but I never will! The most significant change is the removal of “http://” from the start of web addresses. It’s a sensible move since few users know or care what it means. Secure addresses are still shown with the full https:// highlighted in green.

The bookmarks star has moved to the right and the “Go” arrow has been removed (good riddance!) You might notice a few other icons appear, such as a cookie indicator.

WebM
Google’s own open source royalty-free video format, WebM, makes an appearance in Chrome for the first time. Whether it has a chance against H.264 remains to be seen.

Standards and speed
Needless to say, Chrome 6 has better support for web standards and is faster than its predecessor. It was already good in those respects, so the improvements are barely noticeable to most users.

The Developer Tools have also received an update. I suspect many will still prefer Firebug, but it’s an impressive set of tools that come with the standard browser.

There’s little to dislike about Chrome. You may not appreciate Google’s version numbering or ambitions, but they’ve produced a great browser which has attracted a significant following in a relatively short period.

Chrome can be downloaded from www.google.com/chrome. If you’re already version 5, click the Tool icon, About Google Chrome, and follow the update instructions.

Will Chrome 6 become your default browser?