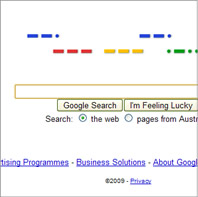 Interesting to see that, as usual, Google have flaunted one of the golden rules of marketing: Don’t fiddle with your branding.

In recognition of Samuel Morse’s birthday (he of morse code fame), yesterday ‘the Google’ replaced their ubiquitous rainbow logotype with it’s morse equivalent.

While they have toyed with their core branding for many years — who could count all the bears, snow and athletes and changing typefaces? — this is the first time I can recall them having NO readable logotype on their most central internet identity.

I have to admit I’m a little in two minds about this.

Part of me thinks ‘awesome, they’re breaking the rules and having fun and doing crazy stuff. More power to them!“. Google fanboys everywhere will grin broadly, say ‘aw shucks!” and become a tiny bit ‘fanboyier’.

But what about the people at the other end of the spectrum. What does your nanna think when her browser opens and her homepage doesn’t read right anymore? Or your six year old niece? Or your 45 year old mechanic, who’s steadfastedly avoided computers for years till now? Have they maybe broken something? Should they do a restart? Should they ring their son/friend/resident IT geek friend?

Ok, sure, they will probably work it out. It says ‘Google Search’ on the button, after all. But if they experience even 5-10 seconds of mild bewilderment, is that a good trade-off? Would it have been that much less effective to reproduce the morse letters directly below their alphabet equivalent? I’m not so sure.

Of course, Google are the very large gorilla in the loungeroom. Ultimately they can do what they like.

Nevertheless, as a company renowned for it’s regimented user testing — recently so well-documented by Doug Bowman and their 41 shades of blue testing — it would be interesting to know whether they even try to test user reactions to their logo shenanigans.

Why You Can Forget About Personal BrandingGeorgina Laidlaw