Command Buses have been getting a lot of community attention lately. The topic can be quite overwhelming at first when trying to understand all the concepts and terminology, but in essence – what a Command Bus does is actually incredibly simple.

In this article, we’ll take a closer look at variations of the Command Pattern; their components; what a Command Bus is; and an example application using the Tactician package.

So, what exactly is a Command Bus?

The role of the Command Bus is to ensure the transport of a Command to its Handler. The Command Bus receives a Command, which is nothing more than a message describing intent, and passes this onto a Handler which is then responsible for performing the expected behavior. This process can therefore be looked upon as a call to the Service Layer – where the Command Bus does the plumbing of the message in-between.

Before the introduction of the Command Bus, Service Layers were often a collection of classes without a standard way of being invoked. Command Buses solve this problem by providing a consistent interface and better defining the boundary between two layers. The standard interface also makes it possible for additional functionality to be added by wrapping with decorators, or by adding middleware.

Therefore, there can be more to a Command Bus than calling a Service Layer. Basic implementations may only locate a Handler based on naming conventions, but more complex configurations may pass a Command through a pipeline. Pipelines can perform additional behavior, such as: wrapping the behavior in a transaction; sending the Command over a network; or perhaps some queueing and logging.

Before we take a closer look at the advantages of using a Command Bus, let’s take a look at the individual components which make it possible.

The Command Pattern was one of the behavioral patterns described by The Gang of Four as a way for two objects to communicate.

To complicate things a little, the pattern has evolved with alternative designs. Architectural Patterns such as CQS (Command-query Separation) and CQRS (Command Query Responsibility Segregation) also use Commands, however in their context – a Command is simply a message.

Traditionally, a GoF Command would handle itself:

Since this approach to the Command Pattern contains the behavior, there is no message that must be routed to a Handler. There is no need for a Command Bus.

However, the Command Message Pattern suggests separating intent from interpretation, expressing actions within the Domain:

In this example, and throughout the rest of this article, we will use a Command as a message. It captures the intent of the user and contains the input required to carry out a task. It explicitly describes behavior the system can perform. Therefore, Commands are named imperatively, such as: CreateDeck, ShuffleDeck and DrawCard.

Commands are commonly referred to as DTO’s (Data Transfer Objects) as they are used to contain data being transported from one location to another. Commands are therefore immutable. After creation the data is not expected to change. You will notice that our CreateDeck example Command contains no setters, or any other way to alter the internal state. This ensures that it can not change during transit to the handler.

Handlers interpret the intent of a specific Command and perform the expected behavior. They have a 1:1 relationship with Commands – meaning that for each Command, there is only ever one Handler.

In our example above, a new Deck is being created. What’s also important to note is what isn’t happening. It does not populate a view; return a HTTP response code or write to the console. Commands can be executed from anywhere, therefore Handlers remain agnostic to the calling environment. This is extremely powerful when architecting boundaries between your application and the outside world.

And finally, the Command Bus itself. As briefly explained above, the responsibility of a Command Bus is to pass a Command onto its Handler. Let’s look at an example.

Imagine we needed to expose a RESTful API endpoint to allow the creation of new Decks:

Now imagine the need to also create new Decks from the console. We can handle this requirement by passing the same Command again through the Bus:

The examples are not concerned with the implementation details of creating Decks. Our Controller and Console Commands use a Command Bus to pass instructions to the Application allowing them to focus specifically on how their type of request should be answered. It also allows us to remove what could have potentially been a lot of duplicated logic.

Testing our Controller and Console Command is now a trivial task. All we need to do is assert that the Command passed to the Bus was wellformed based on the request.

The example application considers a Deck of Cards for a domain. The application has a series of commands: CreateDeck, ShuffleDeck and DrawCard.

Up until this point CreateDeck has only been providing context when exploring the concepts. Next, we will set up Tactician as our Command Bus and execute our Command.

Once you have installed Tactician, you’ll need to configure it somewhere within the bootstrapping of your application.

In our example, we have placed this within a bootstrap script, however you may wish to add this to something like a Dependency Injection Container.

Before we can create our instance of Tactician, we need to set up our pipeline. Tactician uses middleware to provide a pipeline and acts as the package’s plugin system. In fact, everything in Tactician is middleware – even the handling of a Command. 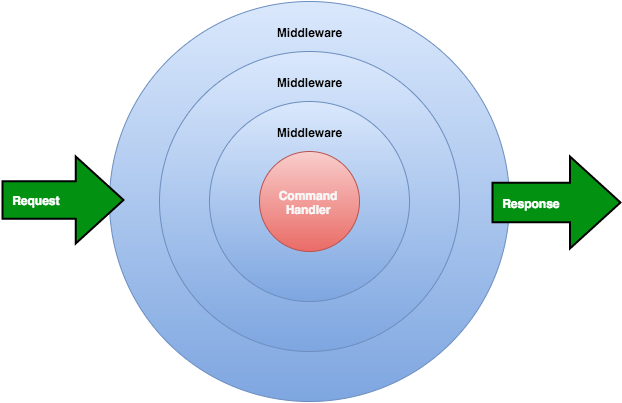 The only middleware we require within our pipeline is something to handle the execution of Commands. If this sounds complex, then you can very quickly hack together your own middleware. We will, however, use the CommandHandlerMiddleware that Tactician provides. The creation of this object has several dependencies.

As we learned earlier, a Command Bus locates the Handler for a particular Command. Let’s take a closer look at how each of these dependencies handle their part of the task.

The role of CommandNameExtractor is to get the name of the Command. You’re probably thinking PHP’s get_class() function would do the job – and you’re correct! Therefore Tactician includes ClassNameExtractor which does exactly that.

We also need an instance of HandlerLocator which will find the correct Handler based on the name of the Command. Tactician provides two implementations of this interface: CallableLocator and InMemoryLocator.

Using CallableLocator is useful when resolving a Handler from a container. However, in our example, we’ll register our Handlers manually with an InMemoryLocator.

We now have all the dependencies required to get an instance of a Handler based on the name of the Command – but that isn’t enough.

We still need to tell Tactician how to invoke the Handler. That’s where the MethodNameInflector comes into play. The inflector returns the name of the method that expects the Command passed to it.

Tactician helps us out again by providing implementations for several popular conventions. In our example, we will follow the handle($command) method convention implemented within HandleInflector.

Let’s take a look at the setup so far:

That looks good, but there is still one problem – the InMemoryLocator needs the Handlers to be registered so they can be found at runtime. Since this is only bootstrap code for a couple of examples, let’s store a reference to the locator for now so Handlers can be registered when needed later.

In a proper application, you’ll probably want to use a locator that can find a Command’s Handler based on a naming convention.

Tactician is now configured. Let’s use it to execute the CreateDeck Command.

To create an instance of a Command, we fill out all the required constructor requirements:

The final task remaining before we can send our Command on it’s way through the bus is for us to register our Handler with the InMemoryLocator we stored a reference to from before:

Finally – we are ready to pass our Command into the Bus:

And it really is that simple!

There are many advantages when applying the Command Pattern or utilizing a Command Bus.

So, what do you think? Is a Command Bus over-engineering, or a great tool for system architecture?

Andrew is passionate about Domain-Driven Design, Test-Driven Development, System Architecture and Agile Methodologies. He is Technical Lead at GatherContent.