Updated to clarify the relationship between <canvas> and SVG in Firefox.

Apple’s Safari browser, followed by Firefox 1.5 and the upcoming Opera 9, have all implemented support for the <canvas> tag, described by the Web Applications 1.0 draft specification (a.k.a. HTML 5). This tag lets you create an area for painting 2D graphics using JavaScript code.

Though filled with potential, <canvas> has not seen much use in mainstream Web development as yet, due mainly to the fact that it remains completely unsupported by Internet Explorer.

Also getting attention in the Web vector graphics arena is Scalable Vector Graphics (SVG) in Firefox 1.5. SVG is a W3C standard for 2D graphics similar in scope to <canvas>, but with the ability to access previously-drawn graphics and modify them using JavaScript. Firefox 1.5’s support for SVG is built atop the same graphics subsystem as its support for <canvas>. 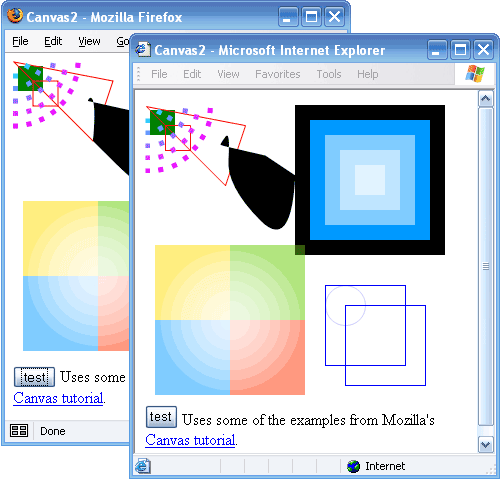 Though there remains much work for intrepid developers to do to bring complete support for <canvas> to Microsoft’s browser, the basics are there and working, and certainly up to the task of rendering, say, charts, graphs and other simple vector illustrations.