Even though we’re definitely living in the Flickr Age (apparently that’s the one that comes right after the Age of Aquarius), there’s still something so lovely about being able to spread a big boxful of photos over my kitchen table. In fact, my favorite screensaver does a pretty good job of emulating this — it’s the one built into MacOS X that grabs photos from your iPhoto library, and scatters them gradually all over the screen in a nice, messy pile. It looks kind of like this: 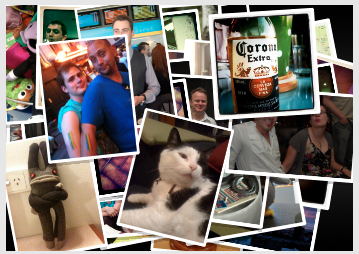 The photos slowly fade in and drop onto the screen, rotating randomly as they go. It’s a nifty effect, and rather soothing to watch. On the right site, it could even make for a fun alternative to a regular image gallery.

Could we achieve this with CSS3 alone? I bet you’re already thinking of ways to make that work. Unfortunately, the versions of Firefox and IE that will support them are still in beta — and even when they do come out, we all know how long it takes the world to upgrade their browsers. For now, let’s look at a hybrid approach: 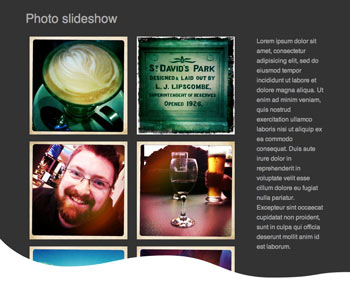 The markup for non-JS users is simple: some divs, some CSS for a basic layout, and the images arranged as a grid on the left there. It’s clean and easy and will do just fine for now; you can see the markup in Example 1. Let’s move right on to tackling the JS users.

There’s a number of different ways to test for the presence or absence of JS — but what do you do when you need more detail, such as whether the browser supports CSS3’s box-shadow, or knows what to do with a canvas? Enter Modernizr, a clean and intuitive way to detect different kinds of browser support, without relying on junky browser-sniffing or frustrating tests. You can hear all about the details of how it does this in a recent episode of the SitePoint Podcast. We’ll use it to see whether CSS3 transforms are available.

The custom Modernizr builder can churn out a tidy, minified version of the script that includes just the tests you need, so I’ve used the builder to make a build with this option.

Let’s include this, and jQuery, in our page. Your HTML element should now have two new classes attached: js, and csstransforms. Use your favourite browser’s developer tools to check that they’re there.

When JavaScript is on, I’d like the images to first be hidden — we’ll reveal them by increasing their opacity one at a time. They’ll also be absolutely positioned within the gallery area. Modernizr gave us a js class, so let’s put that to use:

Since the opacity property of images is set to 0.0, you should see no images once you insert this. It’s OK; we’ll put them all back in the next part. If it bothers you, comment these lines out for now.

Our next task is to shuffle the images around: we’ll start with a jQuery each loop that assigns new styles for them. Our gallery div is 760 pixels wide and 300 pixels high, so we’ll need a number up to about 510 for the images’ left positions, and up to around 30 for their positions from the bottom — this should ensure that they stay within the gallery’s boundaries. They’re going to shrink down to their normal size as they fall onto the division, so we’ll also add a variable for how many pixels’ worth of fat we want to add to each dimension. My images are no larger than 250 pixels in either dimension, so be sure do a bit of calculation of your own to accommodate larger or smaller images!

JavaScript’s Math object will take care of working out some random placements for us. Since Math.random only knows how to choose a number between 0 and less than one, we need to multiply and then round down with Math.floor to get a useful figure:

Now we have our numbers, we can plug them into the images’ styles and attributes, using jQuery’s css and attr methods. It’s a few easy lines:

Each photo should now be pumped up with artificial pixels and thrown carelessly in a mess — it’s time to reveal them one by one. jQuery’s animate method can take care of gradually shrinking the images down and increasing the opacity — just pass it the CSS attributes you want to change, and a time to spend doing it.

We’ll wrap all that up inside JavaScript’s setTimeout method, which allows us to perform actions after a delay. In our case, we want our animations to happen five seconds (that’s 5,000 milliseconds) apart. Did you notice that we have a counter, count, in our each function? We’ll use that to space out our photo animations, by multiplying it by 5,000 at the end of the each loops. At this point, entire each loop should now resemble this:

If all went well, you should have something much like Example 2, and when you run it, your gallery should look something like the below. 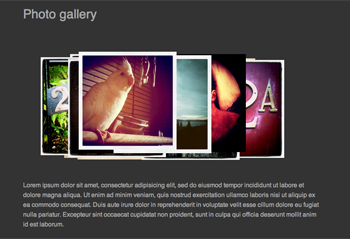 This is pleasingly random, but the angles really set off the effect. For those browsers with CSS3 transform support, we’ll add some randomly generated rotations. How do we do this?

As well as adding handy class names, Modernizr adds a global object which gives us a yay or nay on each of the capabilities we’re asking for. In our script, we’ll check to see if Modernizr.csstransforms is true; if so, we’ll do some more math to figure out a nice random rotation, and then apply it as a transformation to the photo. Doing so is much the same as the last step, except this time our random number can be a negative figure:

Put this in your each loop, before the setTimeout method begins. Example 3 shows you the whole kit and caboodle, and if you have a transform-capable browser, you should be able to see something like this: 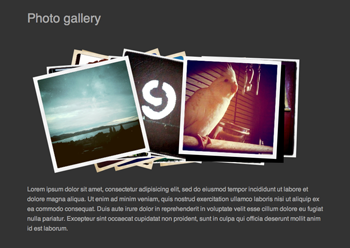 You’ve just put together a smooth, soothing alternative to boring old rotating image slideshows. If you wanted to push it even further, you could add some fanciness with more visual treats, such as box-shadow, or additional animations. More importantly, if this was your first time using Modernizr, you’ve now had a taste of how easy it is to put into place in your projects.