Well, we’ve known is been in the wings for quite a while, but the beta for Photoshop Express — Adobe’s first online application — finally touched down this morning. Although they undoubtedly bring a mammoth graphics reputation to the table, they may not have it all their own way as there are already some well-established and classy competitors in this new arena — specifically speaking Picnik, Pixer, Phixer , Pixenate and Fotoflexer.

1) The sign-up process wanted to know which country I came from — as long as it was the US. Come on guys! Are you FedExing the app to us? DO computers use a different gauge of Interweb in Europe?? Have the terrorists been waiting to use Photoshop Express to make particularly visually attractive evil plans?

Silly stuff. Don’t ask questions that only have one answer.

2) The interface is a basically an online Adobe Bridge, with lots of blacks and charcoals making your imagery appear richer. If you’re a Bridge fan, Express will feel very familiar, although being a consumer-level product, you would have to question how many users could draw on Bridge experience.

Even if you’re not a Bridge fan (like me), you’d probably still have to concede this is a nice environment to work in.

It also seems remarkably fast for a browser-based app, doing a pretty slick imitation of Bridge’s sliding thumbnail resizer — all without ever leaving the browser.

3) The first part of their offering is a Flickr/Picasa equivalent, giving you 2Gb of free storage on joining. A few years back that would have seemed pretty generous, but with so many unlimited uploads services around, maybe not so much now. However the app can interact directly with photos in Picasa and Photobucket, and it also makes it very easy to display your images in Facebook, WordPress and most social networking sites. 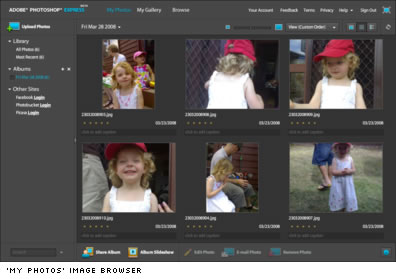 4) Once you have your photos uploaded, the editing tools provided are relatively slick but certainly aimed at ‘Joe Facebook’, rather than photographic professionals or artists. Although each filter is highly configurable, most can only be applied to the image as a whole, so targeting small problem areas (such as the underexposed face area below) isn’t possible — at least at this time.

The Tools are separated into three sections.

5) While the standard way of applying live effects to images seems to be sliders and dials, Photoshop Express takes a slightly unconventional, but I think quite effective method to apply its filter effects. Activating any tool auto-generates a series of eight thumbnail variants across the top, and simply hovering over any one will update the main image in real time.

‘Smart live presets’ like this are usually a better option for less-experienced users than mysterious sliders and dials, and will often deliver a good enough result to even experienced users 4 times out of 5. Manually configurable controls are available under the ‘wrench icon’ when more precise control is required.

As you might expect from a company with such vast experience with image processing, the quality of the finished images generated by Express is very good — noticeably better than some of the competition. Perhaps the single most impressive part of the Adobe offering is that all effects are non-destructive, leaving you free to re-open an earlier edited image and remove your changes.

What Photoshop Express is:

If you’re looking for an attractive, reliable and easy-to-use photo improver for your dad, sister, a client or even yourself, Photoshop Express offers a simple, effective option.

If you’re looking for an online replacement for your desktop-bound Photoshop CS3 (even partially), you’re probably barking up the wrong tree. Express doesn’t even attempt to mimic any of the manual brush, pen or targeted retouching tools you might be used to having access to on your desktop. If you’re looking to do more than point ‘n’ click adjustments, Fotoflexer might offer some more of the options you need.