Part of the movie-going experience is the previews, and for designers, we extend that aspect to the movie posters that litter the walls of the theater. I’ll be the first to admit that I pre-judge a movie based almost entirely by its movie posters. A well-designed poster can draw you in, even if the rest of the movie falls short in important areas.

So, here are eight films that had stellar, extraordinary poster art, but perhaps less-than-stellar cinematic execution. 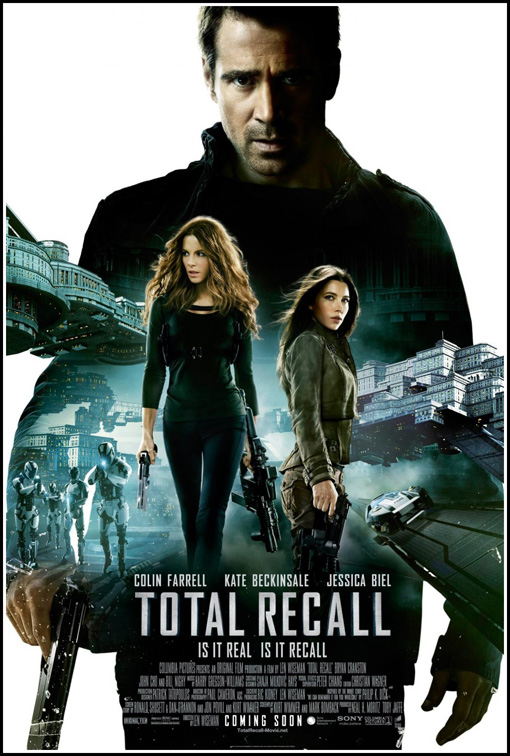 I, along with most of America and much of the world, absolutely love the original version of this film; it’s an American classic! The poster for this redo version seemed to promise better; updated graphics with all of the mind-bending games that made the 1990 film so amazing. This poster illustrates lots of details with the broken glass, the futuristic robot soldiers and car, and the floating buildings. Plus, this particular poster cleverly portrays the images coming out from the main character, a play on the mind tricks that I assumed were involved in the movie itself.

Yes, the action sequences and effects, especially the scene constructs, were mind-blowing, and these alone were the film’s saving grace. The acting and plot, however, didn’t do justice to the spectacular 20-year-old storyline.

Immediately after Doug saves The Colony from utter annihilation in a very impressive fight sequence amidst huge explosions and gravity-defying jumps, the directors attempt one last time to approach the level of mind games from the original version. But, when we are already underwhelmed by this modernized version, the last trick from Lori is just a little too much. Really? She’s still alive after that enormous explosion? Those aren’t the kind of unexpected surprises that made the original movie so popular. 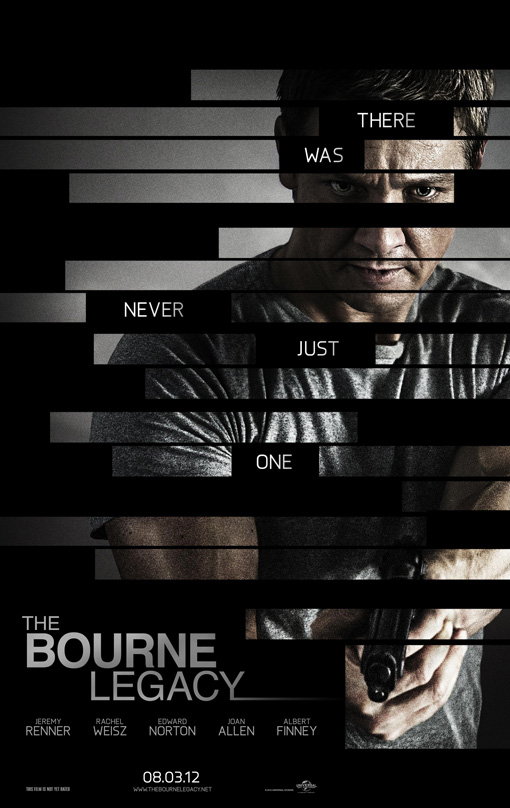 There are several poster designs for this movie, and all are simple screen shots of the character with a single gun in hand, sneaking or running for his life. It’s not Matt Damon on the poster, but Jeremy Renner is an awesome action actor, so I thought he would serve as a solid replacement. This particular poster does a great job of visually portraying nonstop action with edge-of-the-seat plot twists, especially with the quote “There was never just one” scattered across the image.

All of the Bourne movies were incredibly complex, so much so that it takes great concentration to figure out the plot. This one promises the same (the poster even seems to imply it with the same look as the first Bourne movie posters), but it turns out that once you figure it out, which isn’t too far into the movie, the plot is disappointingly simple. 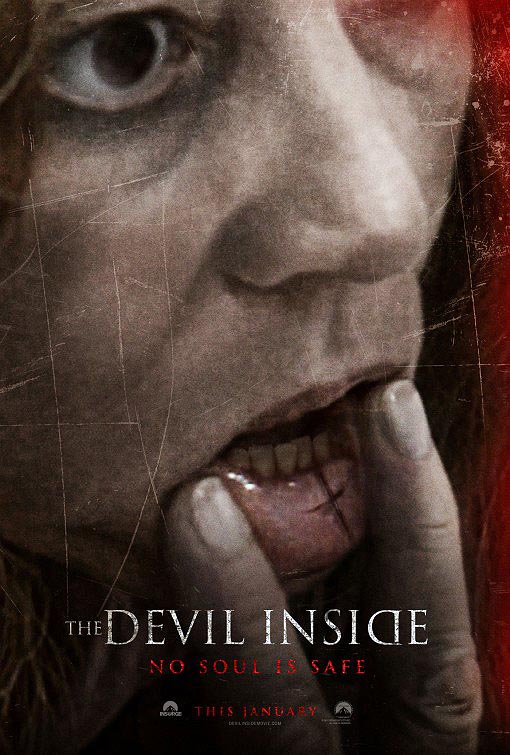 The pure creepy factor of cutting your own lip magnified by the edginess of the design drew me in. If someone could do that to themselves, it must be a crazy scary movie, right?! I got totally pulled in by the sadism; I’ll admit it. The entire poster and other posters of the movie did a great job of highlighting the anti-church and self-inflicted pain mythology that is associated with possession. So, props to the designers for creating a totally freaky poster that eclipsed the quality of the movie itself.

About five minutes into the flick, I figured out the rest of the predictable plot. The premise wasn’t very original; they tried to mix it up with a little of that shaky camera technique, but that didn’t fix the lackluster plot. I wanted to be scared, but truthfully, I found the poster to be scarier than the movie itself. Kudos to the poster designers, shame on the movie directors. 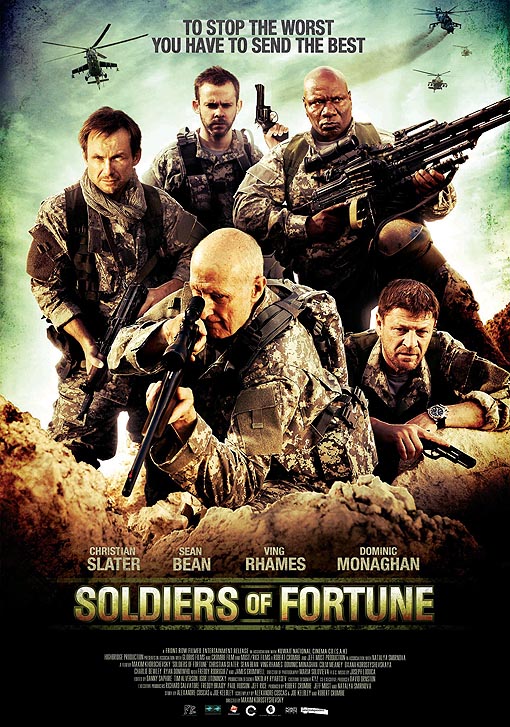 Guns and big name actors. As soon as I saw this, I thought there might be the possibility that the action/war movie genre was going to have a reasonable entrant this year. I had the thrill of “Blackhawk Down” coursing through my imagination. The designers even captured that old Indiana Jones vibe with the title typography.

Once I realized that the main characters were going to “Snake Island,” I should have known that this movie was going to fall short. From scene to scene, it was became clear that all the acting talent in this flick wasn’t being fully utilized.

One quote in particular stuck out painfully and completely summarizes my frustration with this film: “The Grim Reaper always gets paid…” Really?! That kind of writing made this film feel very generic and derivative. With actors like Christian Slater and Sean Bean, I expected more…a lot more. This movie definitely was nothing like Indiana Jones, as the well-designed poster seemed to promise. 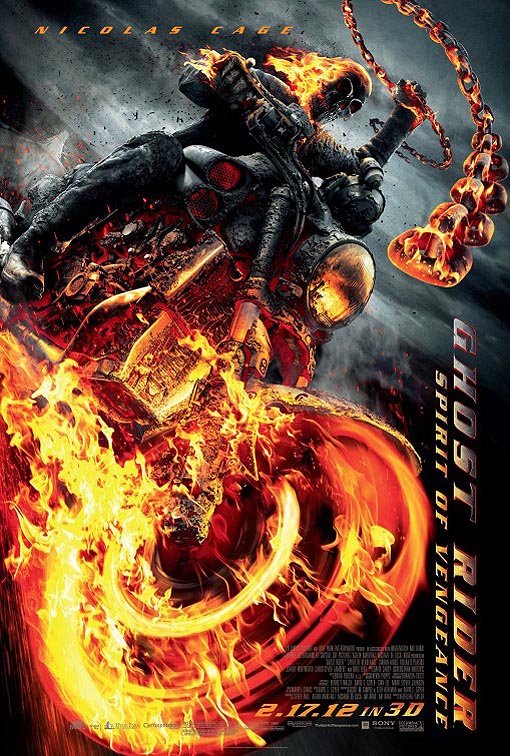 Fire. Chains. Motorcycles. Skeletor. This design, and the others for this movie, do an amazing job of bringing this mythological character to life. For those who have read the comics, there’s a brilliant story around the Ghost Rider character, and this poster captures all the angst, passion, and fire that comic book readers would expect. In fact, the poster design made me forget how bad the other movies were in this series, and I hoped that this time around would be better.

Nicholas Cage trying to be the Ghost Rider. He just can’t do it anymore. And frankly I’m not sure any actor could have set this plot on fire. I kept waiting for a solid tie-in to the original Ghost Rider comics book character that I could connect with, but it never happened, and everyone in the theater wanted it too.

In this installment of Ghost Rider, he gets the chance to relieve himself of his curse. This is a core concept in the Ghost Rider mythology, but the storyline doesn’t do the idea justice. This version misses a huge opportunity to delve into the real story behind the Ghost Rider and we only get a small dose. 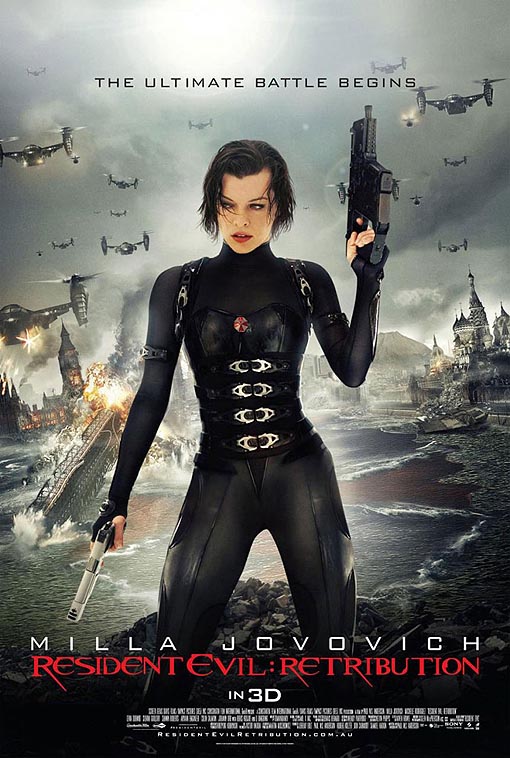 Milla Jovovich in a black leather suit with guns. She gets us every time and those poster designers know it! Even as a chick, I idolize Milla…after all, isn’t she the epitome of female dominance?

The Russian-esque buildings are the second thing I noticed about this poster. My imagination went soaring. Even though I hadn’t jumped into the video game series, I had been faithfully watching the other Resident Evil movies, so the ideas and possibilities of Alice tearing through Russian cities immediately piqued my interest. This poster led me to believe that this one was going to be as impressive as the first movie in the series and would hopefully redeem the second and third.

Maybe I’m just overly sensitive these days, but I felt that the acting was rough. Granted, it’s Resident Evil, so there’s little room for the full spectrum of human emotion, but even the basics of action acting were missing.

The directing wasn’t much better. The movie begins by showing the entire first scene backwards in slow motion. Then, it recapped all of the previous movies in the same painful fashion. After a while, it felt like a fashion show, not a zombie flick. Why couldn’t they have just stuck with the raw, undisturbed action that was promised in the poster? 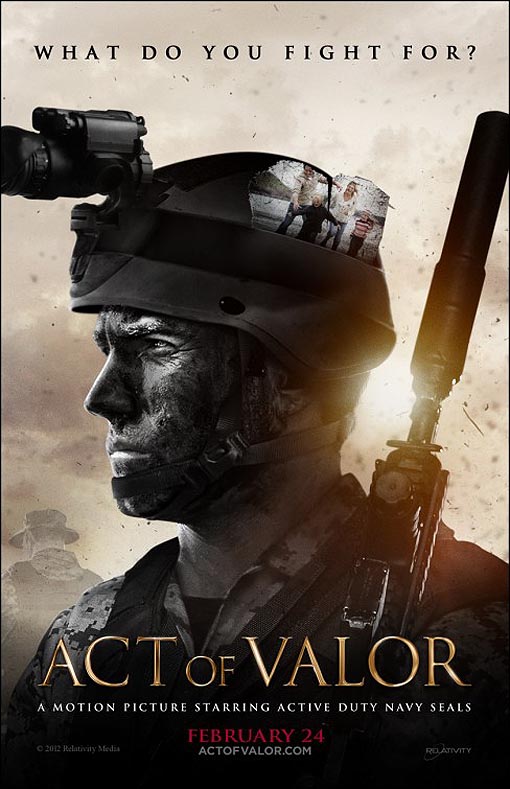 Active Duty Navy Seals. What could make for a more modern, realistic war movie?. This movie poster promised all the realism we could hope for by advertising active duty Navy Seals as the stars of the film. The designers did a brilliant job of leveraging the Navy Seals side of things. The realism of the weapons and uniform are details that those of us with family members in the military notice. So when I saw this poster, I was sold immediately.

Active Duty Navy Seals. The strength of this movie was also its Achilles’ Heel. These heroes are trained to undertake real heroic acts; not act or pretend like they are. You can ask a Navy Seal to save your life, limb, and country, but their training and battle-honed combat skills don’t translate perfectly to the silver screen.

The poster promised realism, but the movie failed to deliver it in the dialogue department. Say what you will about the awesome fight sequences – I loved those, too – but it takes more than a couple of ultra-realistic gun fights to make a killer movie. If the acting had been just a little better, I’d give the film high marks. But it was a painful contrast to the ultra-realism that the gorgeous poster advertised. 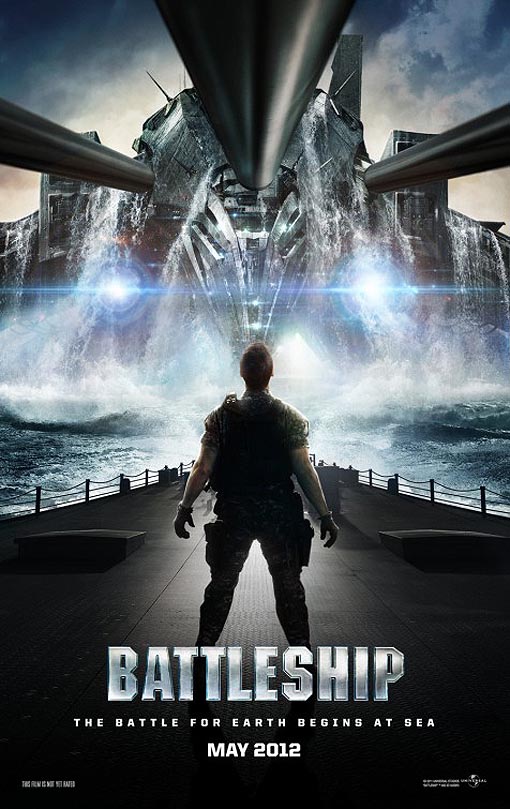 Aliens and huge guns. The effects on this marvelously-crafted poster alone were enough to get me into the theater. The enormous alien ship barreling down on the battleship, with one man on deck ready to take on the entire alien force on his own, promises all of the special effects and action I love. The poster is a beautiful, accurate visual representation of the plot, despite the inherent simplicity of the storyline.

Where do I start? Bad acting, bad plot, bad humor…even the special effects and noise level were over-the-top. The film didn’t resemble the battles that went on in my head while playing the board game as a child, which is an overlooked opportunity for nostalgia.

Admiral Shane (played by Liam Neesan) seems to be the most hated character by the writers. At one point, he orders a crewman to “Prepare to fire!” When the crewman asks which weapons, Admiral Shane replies, “All of them.” His lines made this movie the quintessence of cliche quotes.

The poster designers obviously are top-notch. Unfortunately, poster designs do not make a movie. But, the pairing of successful posters with less-than-successful films is a testament that graphic designers can capture the essence and appeal of a film in a single static frame, even when directors fail to do the same in two hours of high-budget motion picture. It goes to show how much thoughtful design and creativity can resonate with an audience.

Do you have any spectacular movie posters to include? Can you think of any films where the static imagery outperformed the actual film?