If you’ve been looking for a theme or want to build a theme from scratch, you’ve most likely seen the words ‘Theme Framework’ appear somewhere in your travels. Theme frameworks are becoming increasingly common and in this article I’ll cover a few of the most popular options available.

What Are Theme Frameworks?

It’s important that you understand what a WordPress theme framework is before choosing the right one. I would describe a theme framework as the core or foundation of a theme, which allows users to create their own child themes even if they have little or no experience in coding.

In this article, I’ll cover 8 of the most popular WordPress theme frameworks including premium, paid options and also free frameworks.

The Genesis Framework is the most popular framework for WordPress.

You may have come across this name before due to it’s popularity. It’s designed by StudioPress and costs about $60. It’s known for being secure, customizable and mobile responsive. It’s brilliance in Search Engine Optimization (SEO) is the reason many users switch to this Framework.

Coupled with a child theme, the Genesis framework certainly stands out from the rest. It caters for everyone, allowing advanced users to create their own child themes and beginners to pick one from the StudioPress child themes that best suits their needs. 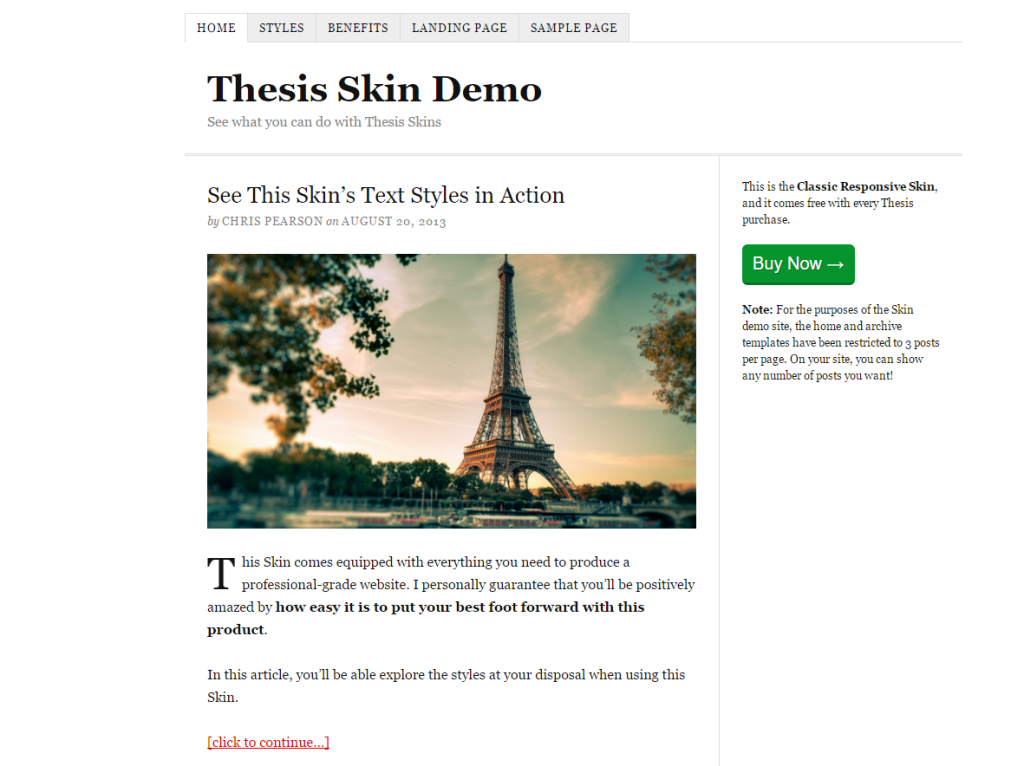 The Thesis Framework is developed by DIY Themes and is another quite popular framework amongst users and developers given it’s easy to use customization features and Search Engine Optimisation. It keeps things simple, by focussing on its three main features: Skins, Site Tools and Boxes.

Here’s a quick explanation of these features:

All of the above can be done without any coding. 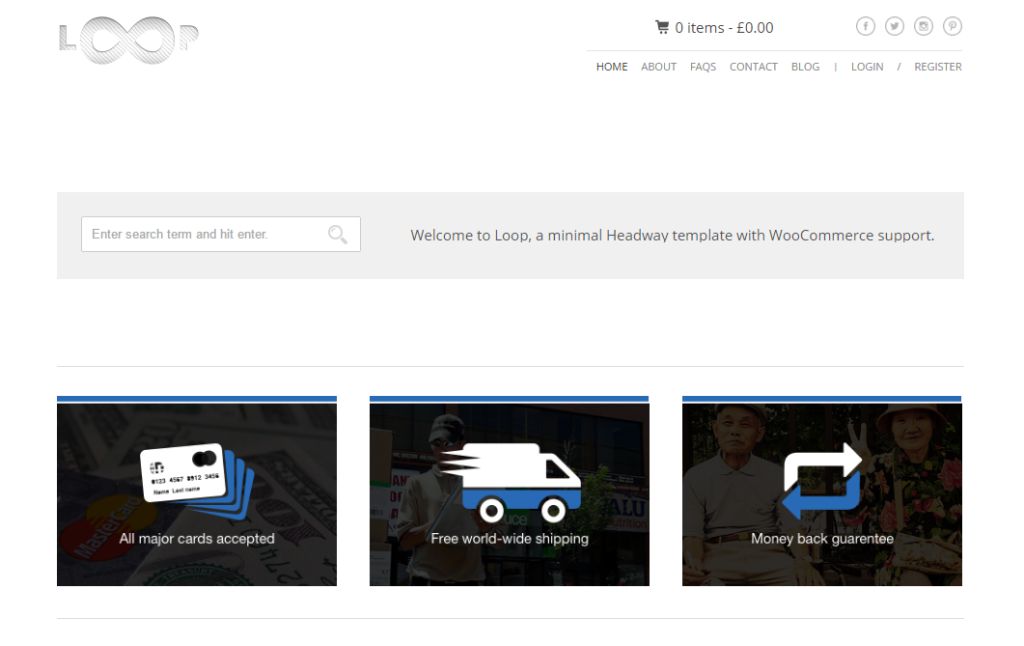 The Headway Framework differentiates itself from others by offering a theme builder interface. It’s just a single file, that you install just as you would install a theme. It offers a blank theme or canvas that users can edit using it’s Drag and Drop Editor, making your theme unique.

If you want more customization, you can use its live CSS Editor, suiting the more advanced users. If you don’t have the time to design a theme from stratch, you could pick one of Headway’s readymade templates. 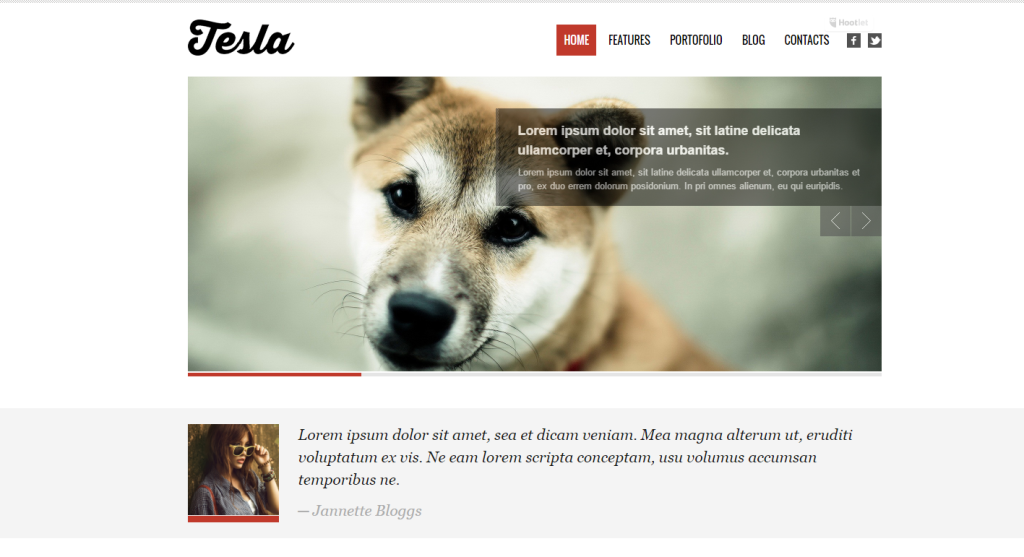 All themes designed by Tesla Themes, are made using the Tesla Framework. The Framework is contained within the Theme files, so it’s basically an all-in-one framework. Themes developed on this framework are built mainly for those who don’t intend to change the code of the theme, making it ideal for those new to WordPress. The downside is that it lacks some of the customisation options of the other premium frameworks, so it’s not ideally suited for the more advanced users. 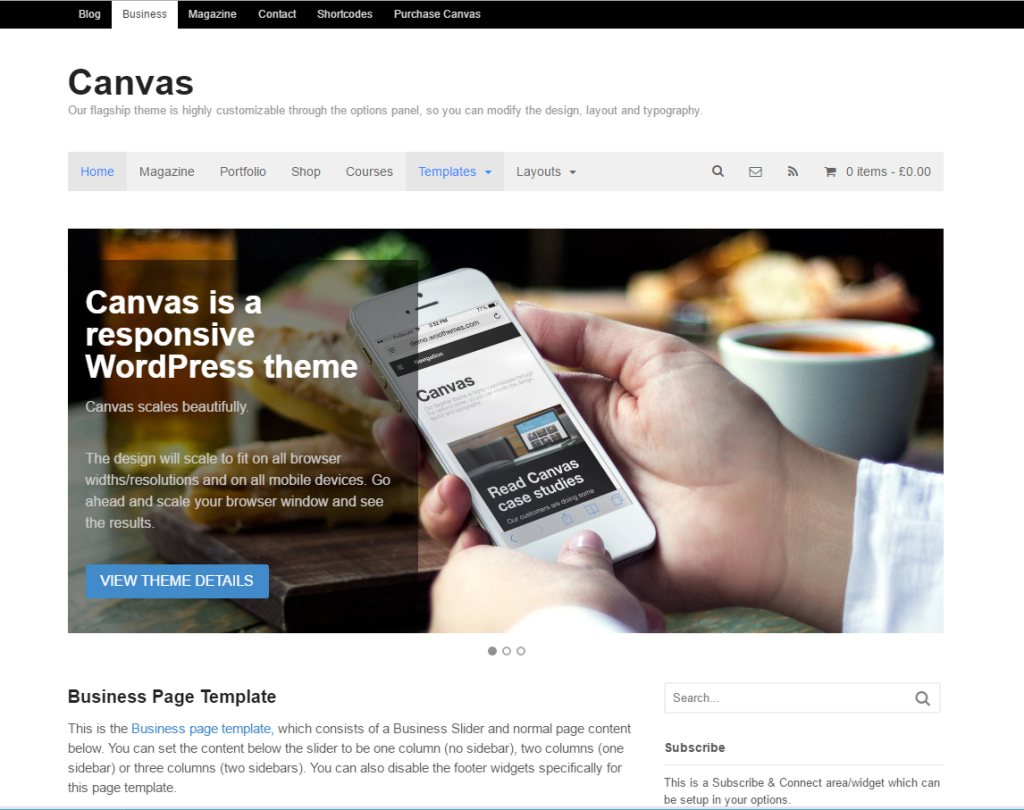 WooFramework powers all of the themes created by WooThemes (now rebranded as WooCommerce), the developers of the famous WooCommerce Plugin. It’s considered a real competitor to its rival frameworks because of a number of features it offers. Themes created using this framework are WooCommerce ready and highly customisable, attracting many developers. 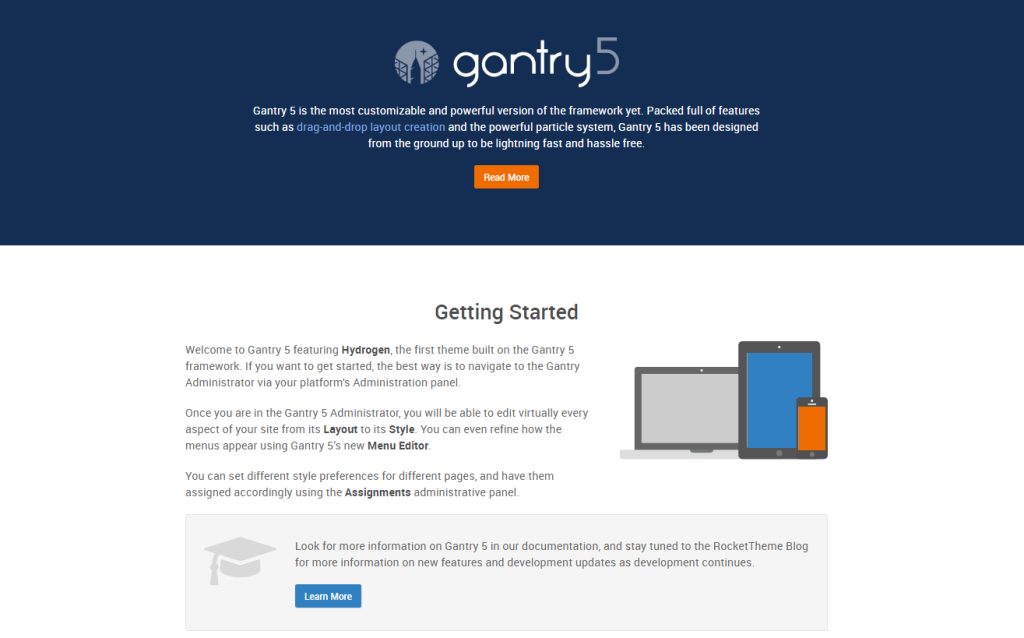 Gantry is provided by Rocket Theme. It’s a popular framework and is considered a serious competitor to some of the premium frameworks. It’s regularly updated (quicker bug fixes), which helps to differentiate it from other premium frameworks, which can take months to release new updates.

Previously, Gantry was a little more complicated to use, however more recently they have included some easy to use tools to their framework, such as Drag and Drop functionality, more panels, menu editor and so on. Using the framework involves downloading the Gantry 5 Plugin, and installing a Gantry supported Theme from their Website. 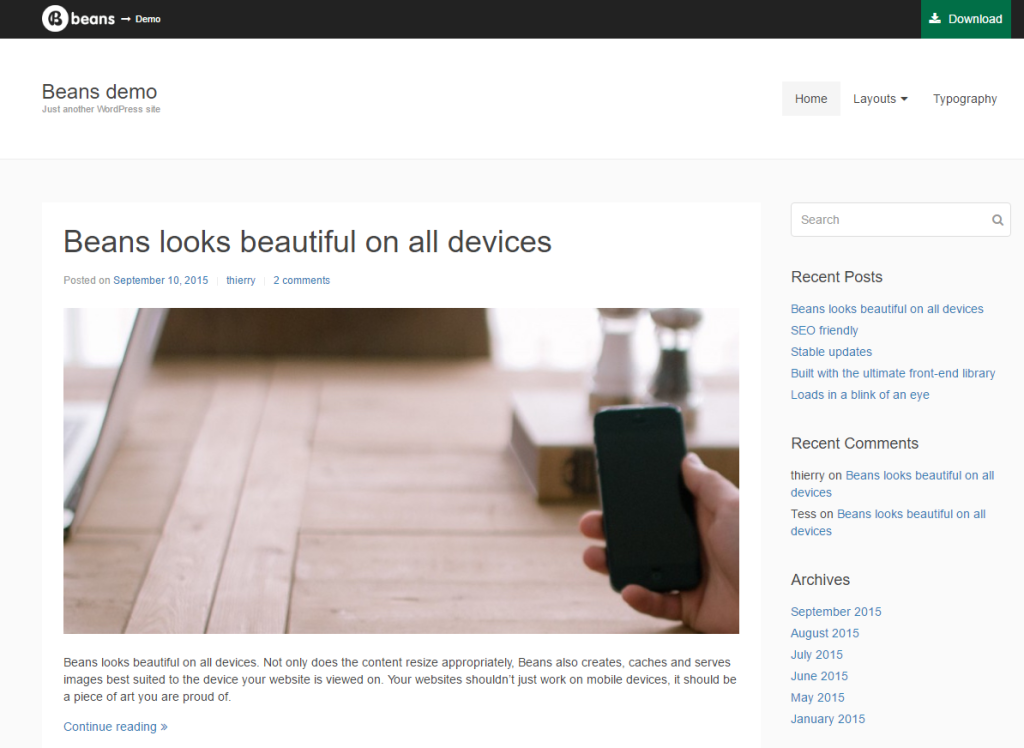 The Beans Framework is another popular theme framework that’s Open Source and completely free to use. Because it’s Open Source, any developer can contribute to its development (e.g fixing source code of errors), and tweak it to their liking. This lightweight and fast framework includes the UIkit API which provides the different customization options.

Using this framework is similar to how Genesis works, with you installing the framework as you would install a theme. They offer a Starter Child Theme on their website, and you can then choose to make your own theme if you wish. A few readymade child themes are available on their website for those who don’t have the time to make one from scratch. Detailed documentation is also available to help those who have never used this theme framework before. 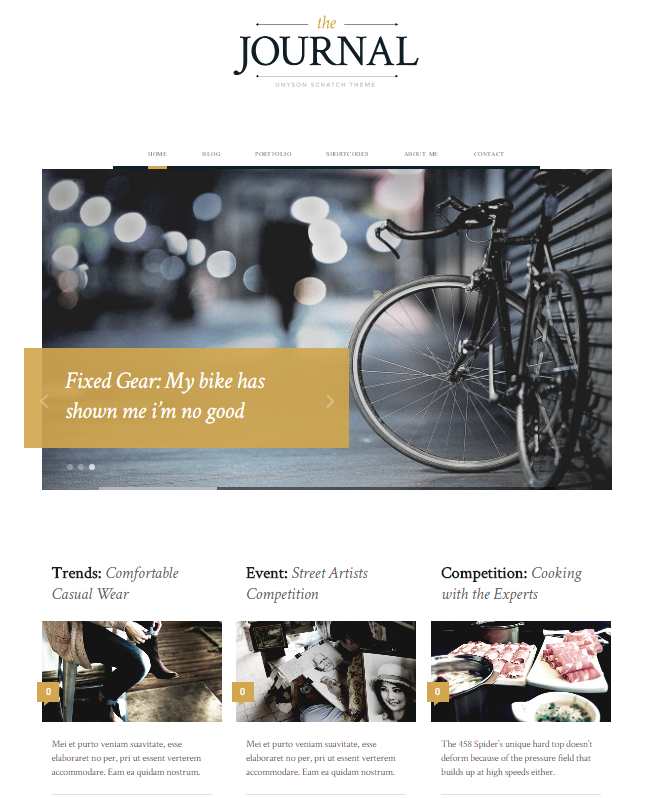 The Unyson Framework, developed by Themefuse, is also another Open Source framework. The framework is installed via their plugin. The plugin allows anyone to create premium themes fast. It contains a many handy features, such as a Drag and Drop Page Builder, Form Builder, and so on. It’s a powerful framework that can allow even someone with only a little experience in WordPress make a great looking theme.

Please let us know your favourite frameworks and why in the comments below.

Joash Rajin is a Tech Blogger/Website Designer and Programmer from South Africa. He is meticulous in everything he does. He writes articles on his blog HOWTOinc 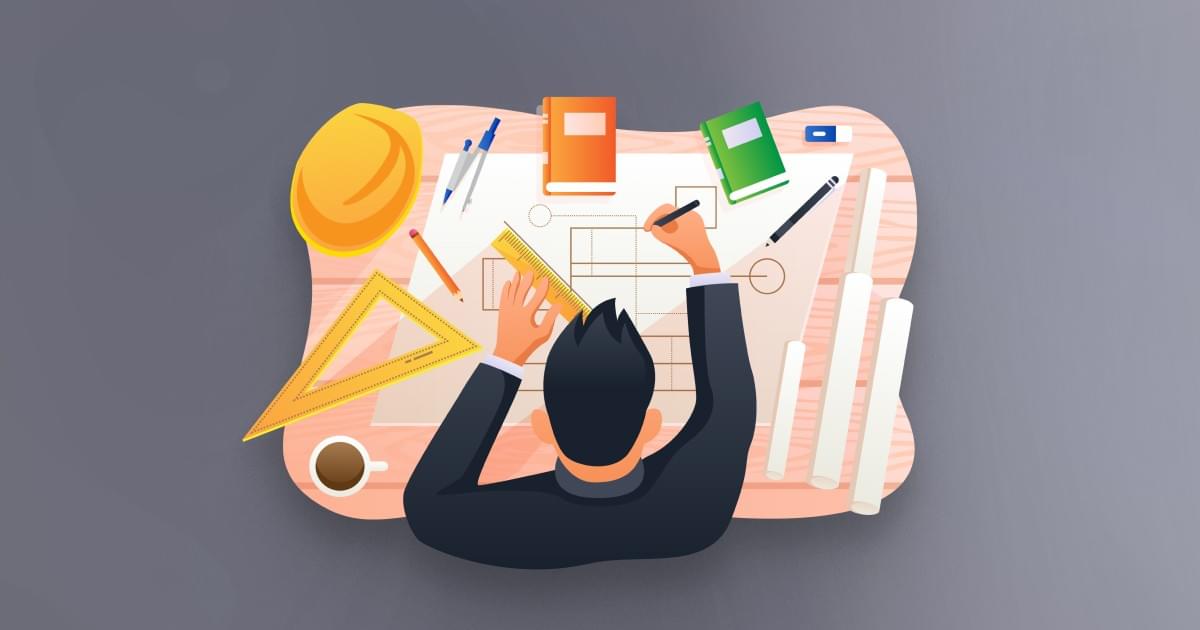 9 of the Most Popular Free WordPress ThemesTahir Taous