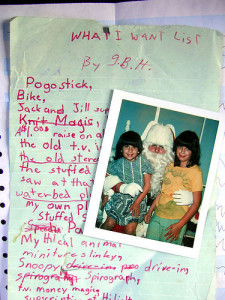 The bigger a site or service gets, the more support requests it usually has. And the longer its list of online help articles becomes.

Whether they’re simple FAQs or more instructional how-tos, once the list is long enough, you’ll usually want to break those items up into groups for easier navigation.

But what happens when those groups start getting longer, and you need to group the items each contains? In practice, you won’t always want to split groups into subgroups with headings.

Here’s a case in point:

We’ve been told for years that menus aren’t meant to have more than seven items, but web users are expected to use long lists all the time — in search results, in forms, and on ordinary content site web pages. 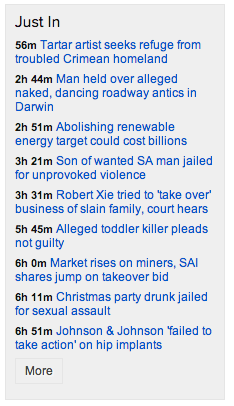 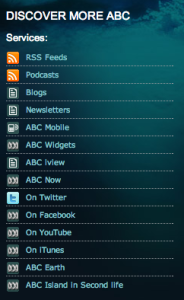 Faced with this problem recently — along with the challenge of ordering a lot of help articles, I decided to do some research into whether there might be better or worse ways to order long lists of help articles.

The list above may seem logical to you. Indeed, that was the whole idea. That’s the procedural list order I used in the test.

The list starts with composing an email, then steps through all the things you might do as you compose that email, and finishes with the things you’d probably do after that, like sending and forwarding.

The order is pretty rough — you could argue that the Reply to an email article should come before the one on composing email — but you get the idea.

In terms of “precision” ordering, this is about as good as it gets for most content managers.

The potential problem with this type of order is that topics of a similar level of depth (read, compose, reply, forward) are mixed in among articles that deal with much more fine-grained tasks, like using emoticons and attaching images.

It’s possible that users might want to get a sense of the higher-level options — the bigger picture of a service’s capabilities — before drilling down to the specifics. Like the procedural list, this chunked kind of list is also popular online.

This approach allows us to place the articles that users use most toward the top of the list, so it’s easier and faster for users to access them.

To be a little more specific, I set out to test which list order let people successfully find an item faster. Essentially, I wanted to test the lists’ scannability.

My test was run online as a simple, single-click test with a database of users who had completed training on my organisation’s help website in the last three months.

I took the list items above from Google’s gmail help page (see a newer, better-chunked version of that here), but simplified them so there were fewer options, and they were more clear-cut and simpler to read.

I used email help article titles in the test because my target audiences work in offices and I believed that email was a commonly understood tool. I expected that people wouldn’t get the text question wrong; the only issue would be the speed at which they could find the result.

The questions I asked the test subjects to answer with their click were:

I asked both questions of both lists — four tests in all. Each subject answered one question only, though, so no user had the benefit of prior knowledge of the list items. I invited users by email and let the test run for a week.

I’ll be honest: when I devised this test I thought the differences would be measured in milliseconds. They weren’t.

We saw a wide variety of click times — up to 44 seconds in some cases. So we decided that if test subjects had taken more than five seconds to answer, they’d moved past scanning, and disregarded their answer for the initial analysis.

The other thing that struck me about the results was how many people got the answers wrong — in one test, no one got the answer right in five seconds or less. This surprised me even more than the click times, and meant my analysis had to take in accuracy as well as time.

That said, the incorrect answers gave me ideas about interlinking content, which we do on our help site both within help articles themselves and through a Related Articles area at the top of help article pages.

For example, the question about adding images inline prompted many subjects to click on the Compose an email item, so it seems that linking all the more fine-grained how-to content from this higher-level overview would be a good — and logical — idea.

This graph shows the portion of subjects who responded within 5 seconds for both lists (scanners), and what proportion of those subjects got the answer right. These figures are averaged for each type of test, so you can see how they performed overall. 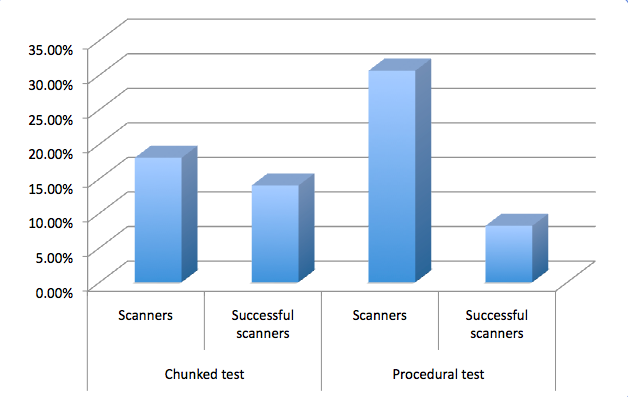 As you can see here, on average, the chunked test received the greater proportion of accurate clicks from scanners.

So are chunked tests best? 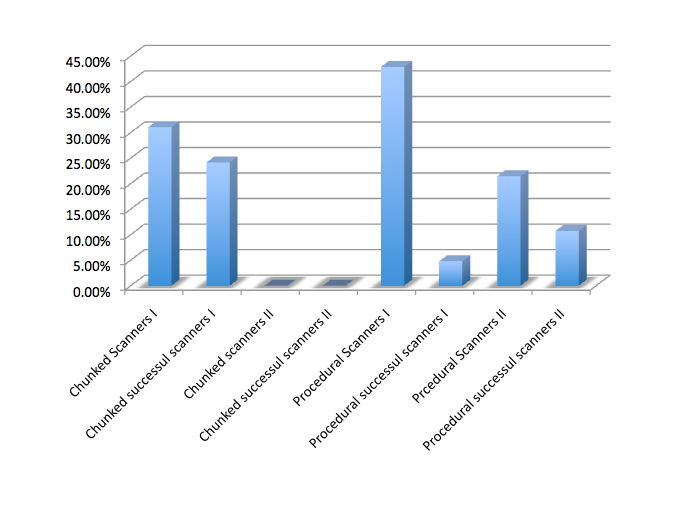 These results suggest to me that chunked lists don’t work for scanners when the answer isn’t near the top.

My UX colleagues were surprised at this result, but I wonder if the procedural list provides a subconscious context for the items it contains. The groupings in the chunked test, I reasoned, were harder to grasp in a short period of time.

So while the chunked test had greater success overall for scanners, it failed completely for scanners who needed an item at the bottom of the list. Meanwhile, the procedural list seemed to encourage more users to click in five seconds or less, but had a comparatively low success rate.

To me as a content manager, this isn’t a clear-cut answer. Should I use procedural lists in an attempt to serve users who need items from any point in the list? Should I use chunked lists in places where I know the vast majority of users will need items that’ll appear in the top half of the list?

To get a clearer picture, I decided to broaden the scope, and analyse the data for users who took up to 10 seconds to answer. I know myself that after about 10 seconds scanning a page looking for a help article, I’m ready to give up, so I thought this was a generous amount of time. I called this group Readers.

The results were very interesting. Within a 10-second timeframe, chunked test users were able to find the right item toward the end of the list. Not only that, but a larger proportion of users had end-of-list success with the chunked test than with its procedural one. 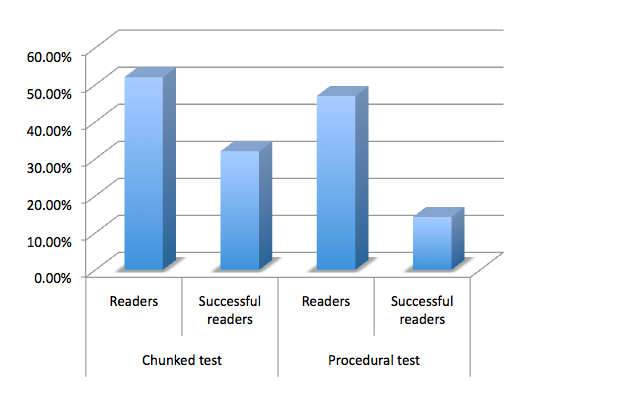 Why might this be the case? Again, it’s hard to tell without more research, but there are a few possibilities. Perhaps when users grasped the procedure they tried to predict it, which reduced accuracy. That might also explain why, though so many (30.6%) felt confident to choose an answer in five seconds or less, so few of those answers were accurate.

Or, perhaps those using the procedural list tried to keep track of the procedure in their minds, which left little room to assess items toward the lists’ end. Meanwhile, maybe the chunked test users were able to more easily discard chunks in their minds as they moved down the list, which left more space to process the remaining list items.

Overall, the chunked test achieved 32% accuracy in 10 seconds, where the procedural one achieved accuracy of just 14.3% — a result that equalled the chunked list’s success for the five-second timeframe.

So which is best?

I think the answer to this question might depend on how engaged your user is with finding the right item in the list. If you don’t expect your users to spend more than five seconds scanning the list, you might not want to leave those whose answer’s at the bottom of the list out in the cold.

But it’s difficult to ignore the stats overall here. In both five- and 10-second timeframes, the chunked test averaged a significantly better success rate than the procedural test.

Briefly, I wanted to explain the rationale for chunking the list in case you want to try it (or a variation) on your site.

First, I took the highest-level, “essential” items that covered broad-brush procedures. With those out of the way, I tried to find items that formed natural groups:

I tempered these groups with word-based logic, which is why the articles about images are grouped together: to allow direct, side-by-side comparison and, hopefully, aid correct selection. I’d be interested to hear about your chunking examples and rationale in the comments.

As I mentioned above, the thing that surprised me the most from these tests was the success rate of users hitting the right answer in each list. In these tests, no more than one third of users selected the right answer from the list — and the topic was email, something we all use every day.

Sure, not everyone’s used inline images in an email before, but I didn’t think these tests would be as challenging for users as the results indicate they were. To my mind, this could have pretty significant implications for our use of lists on the web, including in places like menus, dropdown selectors on forms, search results, and so on. A 32% success rate for list selection on a topic the user has daily experience with? Is this real?

The solution may well lie in creating smaller lists, but again, we don’t see that happening consistently on the web. Perhaps we should. Should Navigation Be Defined in Lists?Craig Buckler