A couple of years ago I found myself unable to work effectively, with constant screaming headaches and stiff necks. It turned out this was due to my working at an inappropriate workspace — my dining table and a terrible chair — with a screen that was too low. Fortunately, I rarely have these issues anymore after I found out what was causing it and took action.

Many people who work at a desk all day will, at some point, have a similar story, suffering with some kind of problem due to the way that they have their workspace set up. Most of the time they’ll notice the issue and work to fix it. But if they’re still spending most of their time sitting, their long-term health may still be at risk.

We’re leading much more sedentary lives than we have before thanks to the march of technology, but it seems all this sitting isn’t very good for us.

Some experts believe too much sitting can cause a myriad of health issues that could lead to an early death. The worst thing? Exercise outside of office hours and leading a relatively active lifestyle doesn’t offset this. In the US, sitting down for long periods of time has now been formally recognised as a health risk. According to an article on Business Insider, citing a study found in the Archives of Internal Medicine:

So for those of us who spend hours and hours at a desk all day, every day, the risk is real and it’s serious.

While it’s easy to think that a good stint in the gym is all that’s necessary to offset all of the time spent sat on our butts, research has shown that it’s not enough. In order to reduce the increased risk of premature death, heart problems, obesity, diabetes and muscular issues, the only answer is to sit less. It seems the answer to that is in the standing desk.

In a bid to see just how much of a difference regular standing can make to your health, Dan Kois decided to spend a whole month doing as much as possible. His account of the month is interesting as it showed just what a struggle standing all day, every day is.

However, the upshot of it was that Dan found himself at the end of it to be five pounds lighter, with stronger leg muscles, and significantly more productive than when he had been sitting. But he found it a struggle, and the article points out that standing all of the time is as bad for you as sitting all the time.

It’s about finding a happy balance. Unfortunately, experts have yet to agree on exactly what that balance is.

The standing desk has become popular in recent years as the effects of an overly sedentary lifestyle have become better known. But there’s little in the way of proof that using a standing desk does actually help. In fact, according to Marc Hamilton, a professor of inactivity physiology at Pennington Biomedical Research Center, there’s no evidence to link standing desks with improved health.

It’s a creative idea, but it’s not been scientifically proven. As of now, there’s really no research to show they do any good.

He goes on to say he suspects standing desks supply borderline benefits at best, and that “sitting for too long is not the same as exercising too little”. Standing for long periods also carries its own health risks. Since the fad for standing desks emerged a couple of years ago, there have been numerous online experiments such as the one by Dan above and all of them bemoan aching feet, sore calf muscles.

While they acknowledge standing does help energize them, some have had problems, like Sydney Trent of the Washington Post, who eventually visited her doctor after suffering numbness in her toes and a tingling, warm sensation in her calves.

The doctor’s conclusion: I was standing too much at work. Those uncomfortable sensations were probably a result of hyperextending my knee, which could put too much pressure on the fibular nerve, a branch of the sciatic nerve, which starts behind the knee and runs alongside the fibula, or calf bone. Ironically, this can also occur when you cross your legs a lot while sitting.

When you stand all day, it’s important you check your posture often and move around as much as possible. Standing desks encourage you to stand still in one spot, so unless you make a concerted effort to move around, it’s unlikely they’re doing a great deal of good. There are plenty of workers around the world that are on their feet all the time. For these people, the risk of varicose veins and hardening of the arteries is dramatically increased.

Experts agree that standing desks offer some benefits, but there’s no evidence beyond the anecdotal to suggest they can combat the effects of a sedentary lifestyle. According to author and explorer Dan Buettner, the key to a healthy lifestyle is “regular, low-intensity physical activity that’s part of (your) life routines.” He studied the healthiest communities around the globe and found that above all, walking is the answer for those looking to lead a long and healthy life.

This is backed up by the medical community. Common sense tells us that rather than simply sitting or standing at a desk all day, getting away from the desk and mixing it up could be the best thing you can do.

Tips for Getting Healthier

With this in mind, there are a few things you can do to help free yourself from the shackles of a sedentary life — this list does include standing desks. These can be pricey (although you can think about it as an investment into your future) so if you can’t afford it, then you can make your own, but it’s vital that you check your posture for both standing and sitting to find out what’s optimal for you. 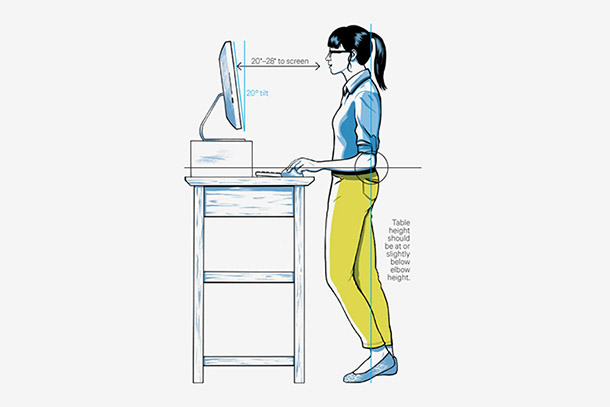 As well as checking your sitting and standing posture, you should also try to work the following into your daily routine:

There’s a serious lack of research out there when it comes to how long you should stand for, so I’d suggest a 50/50 approach that incorporates plenty of movement. Think about how you can make your daily tasks include more of it.

When it comes down to it, a standing desk won’t save your life if you have a largely sedentary lifestyle. Both prolonged sitting and standing can have an adverse affect on your health and the key is to incorporate movement and walking into your daily routine. These could make a huge difference to your health, life and productivity, so what will save your life is making adjustments to help you to move around more during the day and evening.

So instead of getting home and slumping in front of TV after a hard day’s work, perhaps it would be a better idea to get out of the house and go for a gentle stroll?

How do you avoid suffering from the effects of a sedentary lifestyle? Have you tried a standing desk?