The very first major release of Semantic UI is now official. Since the first time I found this wonderful framework – almost a year ago – I’ve watched it closely, and I can say I’m pretty happy about its current state in terms of structure, appearance, functionality, and customization abilities. 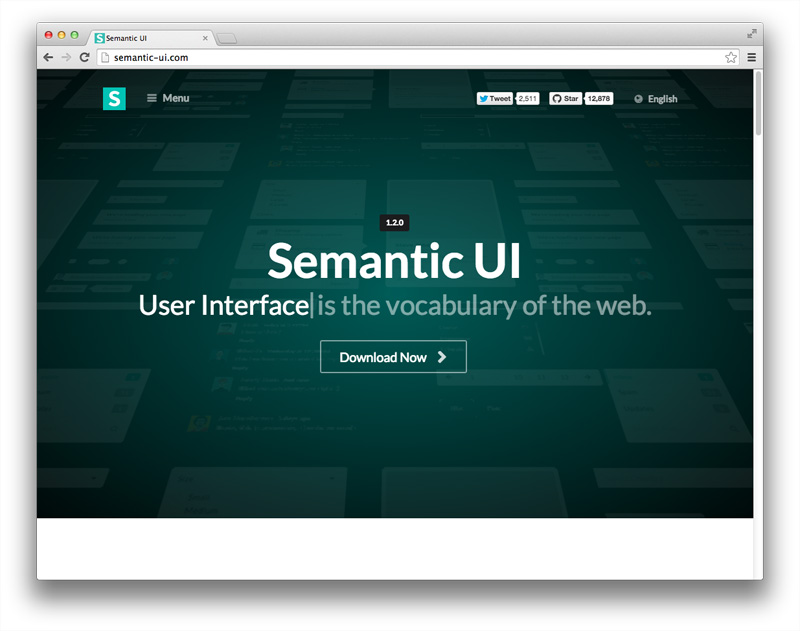 There are many exciting new features and capabilities to be mentioned, but before we look at them, let’s see what differs Semantic from other similar frameworks and why it’s called “Semantic”.

About the Structure of Semantic UI

As its name suggests, the main goal of Semantic UI is to be meaningful. There are a couple of things that help with that aim. All of Semantic’s components are called UI Definitions and are split into 5 distinct types: elements, collections, views, modules, and behaviors (see this article for more on that).

This sort of separation makes the framework much clearer, well-ordered, and easy to work with compared to how other frameworks group their components. Besides that, all naming conventions for Semantic’s CSS classes are built around the principles of natural languages for describing elements – plurality, tense, and word order – thus making your code completely self-explanatory.

The first major release of Semantic UI, version 1.0 comes with many new features and lots of improvements. There have also been further improvements leading up to the current version 1.2. Let’s see what these are.

In this version Grunt is replaced by Gulp. So, in order to use the framework at its full potential you need to have Node.js and Gulp installed. This holds true mostly when you tweak the UI of your website, and during the theme creating/editing process.

Semantic offers two new base components: Site and Reset. Site contains all global variable defaults used for customizing the overall appearance of your website. Reset is used for dealing with aberrations in browsers defaults.

New modules are Nag, Sticky, and Video. Nag is used to display an important message that persists until the user dismisses it. Sticky helps you fix a portion of content or a particular component, such as navigation bar, to the browser viewport as the page is scrolled. Video allows you to display video files from YouTube and Vimeo.

Besides the detailed documentation for each component, the framework has a new section called Kitchen Sink that showcases all interface elements.

But even more important is that now Semantic offers a separate website dedicated to learning the framework. Although the standard documentation on the main website explains how the different components can be used, they don’t give you guidelines about tweaking and customizing your UI as a whole. The new website fills this role, showing you how to get started with the framework, how to customize its default appearance, and how to create themes for a complete change of your website’s look and feel.

One of the biggest problems with ready-to-use frameworks is that often our websites end up with a pretty recognizable look and feel. It’s just a matter of seconds for people to say, for example: Hey, I’ve seen this before – I bet that this website is built with Bootstrap!

It’s important for our websites to be unique, but making them standing out takes extra work and effort. Fortunately, with the new customization system of Semantic, this task is made much easier. Now Semantic uses an inheritance mechanism, similar to Sublime Text setting files, to modify Less variables. In Sublime Text, User settings are placed in a separate file that overrides the Default settings file. This kind of separation keeps the default settings safe from modification, which minimizes the risk of breaking the application’s functionality and keeps the user’s settings intact when the application is updated/upgraded. To see how this logic is applied in Semantic, take a look at their theming guide.

In short, with more than 50 UI components, over 3000 Less variables, and 3 levels of variable inheritance, Semantic gives you complete freedom to change your website’s design in any possible way.

Now Semantic comes with several pre-built themes intended to give you a quick start with the framework. And a separate website dedicated to third-party themes is in the works. It will provide packaged themes that can be downloaded and distributed online.

The buzz surrounding Semantic is great, but why should you choose Semantic over the others? Well, there are several good reasons:

Are There Any Drawbacks to Choosing Semantic?

I like Semantic a lot, but in the spirit of fair play I should mention some aspects of it that I consider weaknesses:

As you can see, Semantic is a modern, attractive, full-featured, and easy to customize framework. In fact, it’s been one of the most popular CSS frameworks in 2014.

It can be used in a wide variety of projects, and in many of them, even without need for third-party products. Despite this fact, there aren’t many well-known projects using Semantic. So, if you have some experience with the framework and want to show us something built with it, please share your thoughts in the comments.

Semantic Versioning: Why You Should Be Using itKitty Giraudel