In a previous tutorial, I demonstrated how to create a sliding puzzle game with HTML5 canvas.

To save time I hard-coded the starting tile positions. Game play would be better if the tiles were randomized, but doing so would have led to complications that would require a separate tutorial to explain.

This is that tutorial.

There are a number of ways to randomize the tiles. I’ll look at a few options and discuss their strengths and weaknesses, as well as the problems that arise and how to overcome them.

One simple method is to initialize the puzzle in a solved state, then repeatedly call a function to slide a random piece into the empty space.

In this case we’re sliding 30 tiles, twice the total number of tiles in the 4×4 puzzle, and yet most of the pieces remain in their original locations. To get anything resembling randomness we would need many more iterations.

That’s not an efficient way to randomize the puzzle. Ideally, we’d like to move each piece only once. We could initialize the puzzle to a solved state, then iterate through the tiles, swapping each one with a tile chosen at random.

Not only does this method give us a much more random-looking configuration, it does so in fewer lines of code. This algorithm, however, has two serious flaws. The first problem is subtle. Although swapping each tile with a random location is much more efficient than simply sliding pieces into the empty slot, this still is not a truly random algorithm. Some starting positions will show up much more frequently than others.

In a 2×2 puzzle, some starting configurations will occur 87% more often than others. Add a third row and some configurations appear five times as often as others—and it continues to get worse as more tiles are added. Fortunately, there’s a way to achieve true randomness without adding extra complexity. It’s known as the Fisher-Yates algorithm.

The mathematics of the Fisher-Yates are beyond the scope of this tutorial, but it does give every tile an equal chance to appear in any square. Using this algorithm, the puzzle is as random as the Math.random() function can get.

But swapping tiles randomly—with the Fisher-Yates algorithm or any other—leads to another problem. Half of all possible tile configurations give us a puzzle that can never be solved. To prevent unleashing an unsolvable puzzle on an innocent user, we need yet another algorithm.

Before I introduce this algorithm, I need to define two terms: inversion and polarity. An inversion is a pair of tiles that are in the reverse order from where they ought to be. The polarity of a puzzle is whether the total number of inversions among all tiles is even or odd. A puzzle with 10 inversions has even polarity; a puzzle with 7 inversions has odd polarity.

The solved puzzle has zero inversions (and even polarity) by definition. If we swapped two neighboring tiles from a solved puzzle, we would have one inversion.

In this game the board is configured as a two-dimensional array, each piece represented by its x/y coordinates.

But to work with inversions and polarity we’ll think of it as a one-dimensional array. We can convert each tile’s coordinates to a single number n with the formula n = y * w + x, where w is the width. Pictured as a single-dimension array the tiles are numbered like this.

To get this total, we need a function to count the inversions for each tile.

Now we can iterate through the tiles and keep a running sum of the inversions.

Since we’ve already calculated the number of inversions, a simple function will tell us whether the puzzle is solvable.

The example above is not solvable, since 19 is not even. But suppose the first two tiles were reversed?

Now we start with 18 inversions. The 3 and 6 are no longer inverted, but everything else remains the same. We have a solvable puzzle.

This gives us an elegant solution that preserves the puzzle’s true randomness—every unsolvable puzzle is paired with a unique solvable puzzle that differs only in the first two tiles.

Unfortunately, this won’t work if one of the swapped tiles is the empty square. We’ll need special code to deal with that situation.

If the empty square is in one of the first two locations, we instead swap the last two tiles. This slightly skews the randomness, but we’re still much closer than any other algorithm can get us.

There’s just one problem remaining. If the width of the puzzle is an even number, sliding a tile up or down reverses the polarity. This is because, as we saw above, the tile changes its relationship with w – 1 tiles. 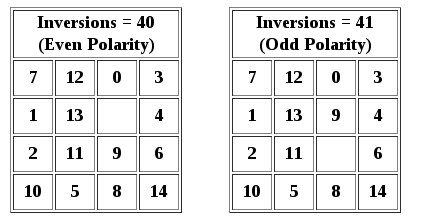 Now we must edit the line that calls this function.

There are a couple things to note here.

First, because the emptyLoc array is zero-based, we need to add one before comparing it with the height.

Second, for a square puzzle we don’t technically need two parameters for height and width; they are the same value, and we’re passing the tileCount variable to both. But separating them in the function clarifies which dimension is used in each equation. If we were to make a rectangular puzzle, we’d know where to use width and where to use height.

Randomizing a sliding puzzle turns out to be more work than creating the puzzle in the first place, but it’s worth the effort for the better game play it provides. You can see an example of a randomized puzzle here.

Bruce Alderman is Lead Programmer for Johnson County Library in Kansas and a freelance writer. He has been building web sites since 1997.