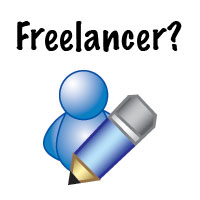 Freelancers are amateurs. They’re not as talented as the designers, writers, and programmers who work for major development shops. They’re not as professional, use lower quality tools, and don’t produce the same quality of work. As such, they deserve less pay. Want to save a buck? Hire a freelancer. The work won’t be quite as good, but the cost savings will be immense.

Or at least, that’s how the professional world views freelancers according to designer Arron Lock. “It is unfortunate but as long as there are wannabe designers calling themselves freelancers there will be people that simply won’t take us seriously,” he writes on his blog.

According to Lock, there exists a negative stigma around the word “freelancer.” “In most people’s opinion freelancers are not professional designers,” Lock writes. That’s why when you pitch a client a $X,XXX price tag for their project, they might reply, “Yeah, but my nephew can do it for fifty bucks.” The problem is that freelancers have a reputation of being amateurs and should be paid peanuts as a result.

There are two ways to avoid that negative connotation, though, says Lock. First, stop calling yourself a freelancer. Lock suggests something like “Independent Designer” instead. That might not fool anyone, though — they’ll still know they’re hiring a contractor, so the stigma might continue to apply. Lock’s second piece of advice is to file the necessary paperwork to form an actual business, even if you’re the sole proprietor.

“Trust me, people take you far more seriously when they hear you are a business owner,” he says. That’s a sentiment echoed by my friend and freelance designer Kelli Shaver (who made the freelancer graphic above). She told me that people are generally much more inclined to hire her once they find out that she owns a local computer repair shop.

So our question to you: Should the term “freelancer” be retired?

Vote in our poll and leave a comment below.

How to Manage Time as a FreelancerJeff Smith