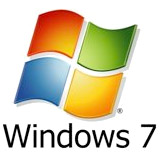 Unless you’ve been living on Neptune for the past year, it will not have escaped your notice that today’s the day for Microsoft’s new OS. Windows 7 has been released around the world, so expect to hear news about stores opening at midnight and long queues around the block. Amazon also announced that pre-orders for Windows 7 outsold the most recent Harry Potter book.

Compared to other launches, Windows 7 has been a fairly low-key affair. Microsoft CEO Steve Ballmer will attend the formal launch in New York, but there’s little glitz and glamor:

Primarily, Windows 7 is leaner and faster than Vista. The OS will run on a range of machines including low-powered netbooks. It will boot quicker and allow you to get online sooner.

Vista’s bloat allowed Linux to gain a foothold in the netbook market. There’s a general perception that Linux is for geeks — even though many users would undoubtedly be better off with an OS that is far more tamper-proof than Windows. The risk for Microsoft was that people might use Linux and like it. Although they counteracted that threat by extending the life of XP, Microsoft needs Windows 7 to be a more profitable long-term solution.

From an aesthetic point of view, there’s little to separate Windows 7 from Vista. I’m not a fan of unnecessary desktop effects and I initially disliked Vista, but I grew accustomed to it.

If you’re expecting a long list of new features, you might be a little disappointed. Touchscreens and handwriting recognition is supported, file sharing is easier, power saving is better, XP Mode will be useful, and there are some pleasant desktop enhancements. However, the OS is an evolution rather than a revolution; almost everything has been polished and improved, but nothing radical has been added. Perhaps that’s for the best. Microsoft tried to be ambitious with Longhorn, but the technically amazing OS was never delivered.

Overall, Windows 7 is a worthy upgrade. Whether you can justify the cost is another matter.

Could This be Microsoft’s Last OS?

There has been much speculation about how operating systems will evolve in response to cloud computing. Google plans to release Chrome OS in 2010 — it will be free and probably consist of a lightweight Linux base that boots quickly and launches a browser. However, corporate users are more conservative and wi-fi will need to be universally ubiquitous (and possibly free) before the benefits of cloud computing are fully realized.

The biggest threat to Microsoft is it’s own products. Users are often happy to stick with Windows XP and Office 2003 because it does everything they want. However, it’s evident that Microsoft is switching emphasis to thin client computing (or at least trimmer client computing). Charging $200 for an OS upgrade every few years will therefore become an outdated revenue model. Microsoft will certainly trial pay-as-you-go and advert-supported products. If they’re successful, the same model could be applied to Windows.

Despite increased competition, I doubt this is the last we’ll see of Windows. Windows 7 should put Microsoft back on the right path and the initial signs indicate it will be a success. Let’s hope so: the sooner people upgrade, the quicker IE6 will be eradicated!

Have you purchased Windows 7? Have you installed it? Do you like it? Has Microsoft done enough to answer Vista’s critics?

And the big question: is Windows increasingly unimportant or will users continue to use what they know?