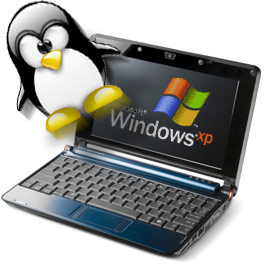 Asus launched their ground-breaking Eee PC at the end of 2007. The hardware may have been basic, but the netbook concept was revolutionary. The device was a truly portable, fully-functioning laptop that was no more expensive than a top-end mobile phone and a fraction of the price of similar-sized PCs. The machines were ideal for developers working on the move.

The most unusual aspect of the Eee PC was the Linux operating system. The OS was based on the Xandros distribution but heavily customized to support the hardware. Although Linux was a risk, it was an obvious choice for Asus:

The 20-second boot time, attractive graphical interface, and range of usable software received rave reviews. Children and novice users loved the system, whilst geeks could access the underlying OS or install other Linux distributions. Stocks of the Eee PC sold out instantly and, within months, every major PC manufacturer had announced their own Linux-based netbook range. Linux’s future looked good.

Microsoft had to take action. Windows is the most profitable part of the enterprise and it was essential to protect their business:

I’m sure the Microsoft sales team also offered sweeteners such as bulk discounts and copies of MS Works. However, the Windows customer support line was possibly the most attractive cost-saving option for many OEMs.

The re-introduction of XP had a dramatic effect:

You cannot blame Microsoft for their actions. They are a commercial business and they still receive less money for Windows shipped on a netbook than a desktop or laptop. Although OEMs can choose not to install Windows, Microsoft successfully prevented Linux getting a stronger foothold in the OS market. That may restrict user choice but, given that choice, most people still prefer an OS they know.

Perhaps the biggest problem is market confusion. Windows has inevitably caused netbook specifications to increase. Are you buying a high-end netbook or a low-end laptop? Categorization may not matter, but many netbooks are evolving into resource-hungry, fragile, and expensive PCs. The popularity of the original Eee PC proves that many people still want a simple and reliable device which handles day-to-day email and browsing.

Have you purchased a netbook recently? Did you opt for Windows or Linux? Did you have a choice? Was the specification or price higher than you wanted?

5 Reasons Why Zuckerberg Has Not Killed HTML5Craig Buckler