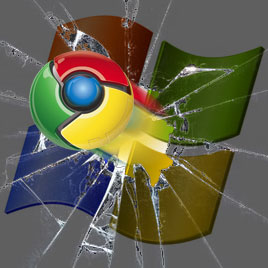 Google’s recent Chrome OS announcement caused a tsunami of media speculation. Can Google create a usable OS in less than a year and take on Microsoft at their own game? The facts have been overawed by opinion, but few facts are available. Here’s a summary of what we know so far…

Although Google already has the Android operating system, Chrome OS is a separate project. Technically, it will be based around a lightweight Linux kernel and a new windowing system (note: Linux uses the X Window System. Any graphical user interface can be built on top so, unlike Windows, Linux users can choose from GNOME, KDE, Xfce or any other desktop environment.) Google’s Chrome browser will be the primary application and I suspect Google Gears will provide offline functionality.

Cloud-based operating systems are not a new idea. Netscape proposed the possibility in the late 1990s and, even though it was pure vaporware, it was one of the primary reasons Microsoft fought and won the first browser war. Even today, Google is behind similar projects such as Moblin and Jolicloud.

Although the Chrome OS announcement has an element of marketing hype, there is good reason to believe Google are serious. Controlling the browser allows Google to direct users to their online applications. GMail, Docs, and Wave could receive a registration boost that increases advertising revenues and user lock-in.

Is it possible to develop a new OS within one year? OS development is tough; Microsoft and Apple have been working on them for almost 30 years and they still make mistakes. Using Linux could help, but even the Chrome browser is not complete on that OS.

So can Google take on Microsoft assuming they produce a viable alternative to Windows? It’s unlikely:

However, there are several opportunities Google could investigate:

Chrome OS will continue to attract massive media speculation until its release (and, yes, that includes SitePoint!) Even if Google gets it right, they face a huge uphill struggle. They’ve had limited success persuading people to switch browsers; expecting them to switch operating system is a far more difficult challenge.

3 Strange PHP Facts You May Not KnowAurelio De Rosa