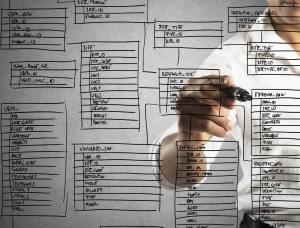 Modeling many-to-many relationships between data entities in the ActiveRecord world isn’t always a straightforward task. Even if we have a well-defined ER diagram to work with, it’s not always clear which ActiveRecord associations we should be using and what the implications of our decision will be. There are two types of many-to-many relationships: transitive and intransitive. In mathematics,

To put this into a data modeling context, a relationship between two entities is transitive if it can be best expressed through the introduction of one or more other entities. So, for instance, it’s easy to see that a Buyer buys from many Sellers while a Seller sells to many Buyers. However, the relationship is not fully expressed until we start adding entities such as Product, Payment, Marketplace and so on. Such relationships can be called transitive many-to-many as we rely on the presence of other entities to fully capture the semantics of the relationship. Luckily, ActiveRecord allows us to model such relationships with ease. Let’s start by looking at the simplest ActiveRecord many-to-many associations and work our way up.

This is the simplest many-to-many association. Two models are associated by simple virtue of their existence. A Book can be written by many authors and an Author may write many books. It is a direct association and there is a direct dependency between the two models. We can’t really have one without the other. In ActiveRecord this can easily be modeled with the has_and_belongs_to_many (HABTM) association. We can create the models and migrations for this relationship in Rails by running the following commands:

We need to define the HABTM association in our models like this:

Then, we can create our database tables by running:

Finally, we can populate our database:

We can now, among other things, access: a book’s Authors, all Books written by an Author and all Authors that have written a specific book:

A transitive association that can be best described with the addition of a single extra model. Take the example of a Student. A Student can be taught by many Tutors and a Tutor can teach many Students, but we can’t fully express the relationship unless we include another entity: Class (to avoid Ruby reserved-name conflicts, let’s name it Klass)

We can say that a Student is taught through attending Klasses and that a Tutor teaches Students through giving Klasses. The word through is important here, as we use the same term in ActiveRecord to define the association:

Now we can create our database tables by running:

We can then populate the database:

As well as the usual simple finds we can also create some more complex queries:

As in most cases of mono-transitive associations, the existing model names reflect the association implicitly (i.e. X has_many Z through Y), there is no need for us to do anything more and ActiveRecord will model our association perfectly.

A multi-transitive association is one that can be expressed best through many other models. We as Developers, for example, are associated with many software Communities. Our association, though, takes many forms: we may contribute code, post at forums, attend events, and many others. Each Developer is associated with a Community in their own way through specific actions. Let’s pick three of these actions for our example:

The next step in our modeling process is to define the data entities (models) which help realize these actions (associations). For our example, we can safely come up with:

Now let’s go ahead and create the models we need:

We then can define the associations between our models. At this point we may be tempted to use the same technique we used in the mono-transitive example and repeat the has_many..through invocation for each association:

Similarly, we do the same for Communities:

As you may have noticed, on the Community model we are changing the names of some associations to reflect their nature from this side of the relationship. For instance, a Developer makes appearances at events, while a Community hosts events. A Developer posts at forums, while a Community fosters discussions at forums. This way, we are ensuring that our method names (that AR will dynamically create based on our associations) are meaningful and clear.

We can now create some events, forums, and repos:

We can then start extracting useful information from our models:

We can use the associations directly and/or join the through models in an endless variety of permutations to retrieve the data we need.

Modeling with many-to-many relationships using ActiveRecord can be challenging to get right. Once you understand the nature of each association and the options ActiveRecord offers, it makes this task much easier.

Meet the author
Fred Heath
Fred is a software jack of all trades, having worked at every stage of the software development life-cycle. He loves: solving tricky problems, Ruby, Agile methods, meta-programming, Behaviour-Driven Development, the semantic web. Fred works as a freelance developer, and consultant, speaks at conferences and blogs here .