Widespread browser support for @font-face has done wonders for web typography, allowing us the freedom to use custom fonts wherever we want. But different fonts are not the whole story with web typography. There are other things that the web has long been weak at, such as proper hyphenation of long words, and usage of open type font features such as ligature and stylistic swashes that often get locked away inside font files and never see the light of day.

In this article we will look at some of these new CSS font features.

This section could also be named something like “solving the problem of justified text/long words looking awful in text columns” … but that would sound really terrible too, so I just stuck with plan A. In brief, the problem lies with the fact that, for years, there has been no decent way to use text-align: justify without it looking awful. 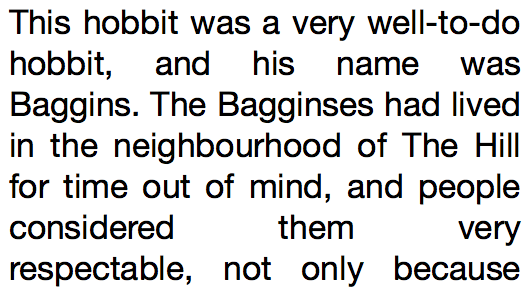 Fortunately there are now ways to deal with the problem, which work across most browsers you might have in your support matrix. The best of these is the CSS3 hyphens property, which adds typographically appropriate hyphens where needed, giving a nice visual clue that the word continues on the next line. It also makes an effort to break words that don’t quite span the full width of the column, effectively reducing the rivers-of-whitespace effect. The code looks like so:

There are other values for the hyphens property too: none will turn off hyphens if they have already been set somewhere else, and manual will cause words to break only when manual hyphens have been set on the words using the &hyphen; or &shy; characters.

Below is a demo, which you’ll have to view in a supporting browser:

See the Pen Hyphenation example by SitePoint (@SitePoint) on CodePen.

The text-rendering property provides information to the browser’s rendering engine to indicate what to optimize for when rendering text. The possible values are:

These features are supported in Firefox, Chrome, and Safari, with the caveats listed above.

font-feature-settings is a great new property that allows you to control the usage of the cool alternative glyphs residing inside your open type font files (some of them, anyway) such as ligatures and stylistic swashes, which otherwise wouldn’t see the light of day.

How do you know what font features are available?

Good question. This used to be pretty difficult, as font foundries seemed surprisingly bad at communicating such information. Fortunately more recently this information has been made more readily available, for example via hosted font services such as Fontdeck. 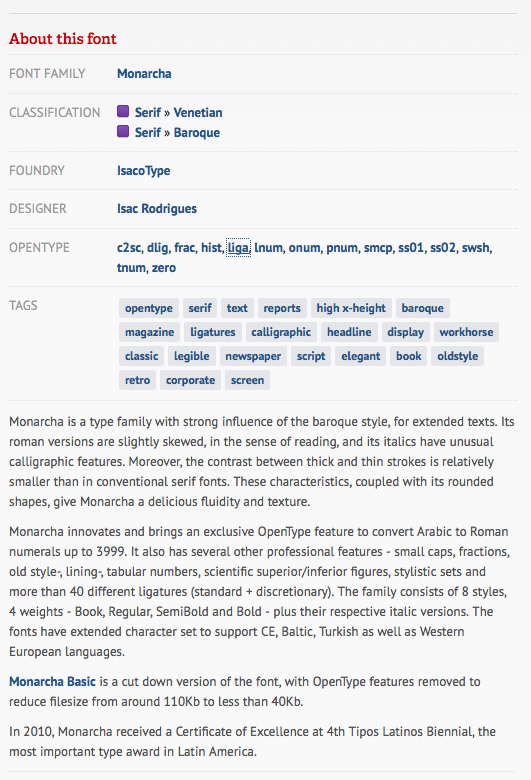 Once you know what your font has available, you can start turning said font features on and off, using the font-feature-settings property. Its value takes the form of a list of codes that represent the different features you want to use, so for example:

Firefox and IE11 no longer need the prefixed version, but I’ve left those in for the benefit old older versions that might. Blink and WebKit browsers still need the prefix, and so does IE10.

These take the form of stylistic joins between appropriate letter couplets, such as “oo” and “th”.

The above image shows discretionary ligatures (dlig) applied to Monarcha Book from Fontdeck.

There are a number of different open font features that change the presentation of numerals in many advantageous ways. For example:

Old-style numerals (onum) are what they say on the tin — those old fashioned numerals that don’t all sit on the font baseline and are not uniform height.

Some fonts also have special glyphs to represent the subscript and superscript required for fractions — frac is the relevant feature setting. The below shows a before and after example.

Small caps and petite caps are supposed to provide a much better, calculated look for small caps than has historically been provided by the CSS font-variant: small-caps option.

Kerning refers to the practice of adjusting the gaps between certain pairs of characters to make the gaps appear more natural and consistent with the gaps everywhere else. This tends to be an issue with letter pairings such as “Wo”, “Na”, with more angular characters. Some fonts have kerning information built in, which can be turned on and off. I’ve included an obvious example below.

Stylistic sets and other assorted effects

Finally, I’ll look at a kind of miscellaneous bucket of effect types. You’ll find fonts that have completely different letter forms available, or swashes and letter forms that only appear in certain contexts.

There are probably others available too, which we may uncover in due course.

If we apply stylistic swashes to the Trilogy Fatface Regular font from Fontdeck:

We get the following interesting effects:

The image below represents the way the font normally looks (i.e. the “standard” look without using font-feature-settings):

And the image below shows the result:

To wrap things up, below are some tips for usage.

When deciding what fonts to use, it is a good idea to set up a test file that includes different sections of text set to be styled with all the different possible font feature settings. So you can then apply different fonts to the page (for example from Fontdeck), and see what the different open type font features look like when rendered on the page.

You’ll probably not want to use advanced font features on all of your type. Most likely, you’ll just want to apply such features to headings, single characters, or small strings of characters in specific places. In many situations you could probably save some bandwidth and processing power by using small subsets of your fonts that just contain the characters you need

That’s it for this one. If you have any experience with these features or have anything to add, we’d love to hear your comments.

Meet the author
Chris Mills
Chris Mills is a senior tech writer at Mozilla, where he writes docs and demos about open web apps, Firefox OS, and related subjects. He loves tinkering around with HTML, CSS, JavaScript and other web technologies, and gives occasional tech talks at conferences and universities. He used to work for Opera and W3C, and enjoys playing heavy metal drums and drinking good beer. He lives near Manchester, UK, with his good lady and three beautiful children.