Amazon’s Kindle e-readers are great for presenting fiction. However, they’re problematic when displaying technical content. One problem is that code listings often look terrible, causing many developers to shy away from using Kindle as a distribution medium.

In this article, I first review the problem of poorly formatted code listings. I then offer three strategies for presenting nicely formatted code. I rely on the Kindle Previewer’s e-reader simulators to show results.

First: A Note on PDFs

Instead of creating a native e-book, you could create a PDF that all but the oldest Kindles can display. However, there’s a problem with PDFs: Although code listings and other content are nicely formatted, PDFs are hard to read. Either the font is too small when a PDF page fits completely on the screen or a larger font is required that necessitates excessive horizontal scrolling.

The Problem with Kindle Code Listings

Lines of code often wrap from one line to the next, making the code hard to read, especially at larger font sizes where there’s more wrapping from line to line. For example, the image below shows a code listing with wrapped lines in the Kindle Previewer’s simulator for the Kindle e-ink device. 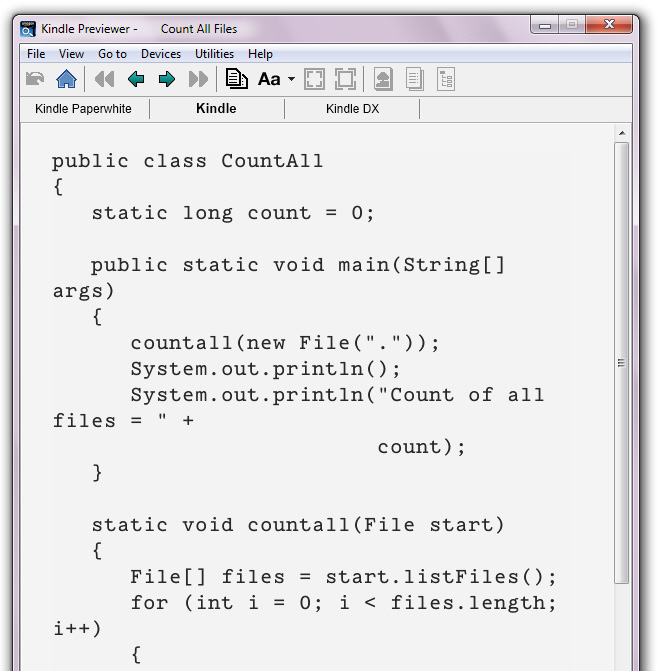 In the image above, you can see the source code to a Java application called CountAll — Java source files have a .java file extension. You’ll notice that the source code wraps around from the end of one line to the start of the next line, which looks messy.

In this article, I explore three strategies for improving the look of CountAll.java’s source code. First, however, check out the code below, which presents the HTML that led to the image shown above.

You can see the full HTML document in the download link at the bottom of this article. I’ll modify the section you see above in order to demonstrate each of the solutions I present in this article. 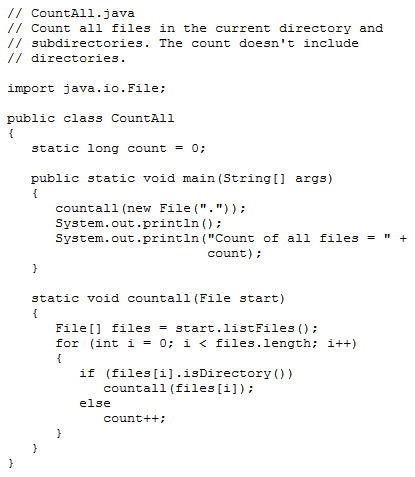 The CountAll.java code listing is replaced by this image.

To include this screenshot as our code listing, we can simply remove the <pre> tags and all their content and replace them with an image, like this:

The screenshot below shows how the image looks in the Kindle Previewer’s simulator for the Kindle Fire e-ink device. The CountAll.java code listing is replaced by an image of the listing.

Although simple to implement, this solution is problematic:

Placing a few high-quality images in a book typically isn’t a problem. However, relying on this solution for presenting all of your code listings will probably cost you.

Solution 2: Use Placeholder Images and Links

Despite its various problems, the previous image strategy has some merit. However, instead of replacing code listings with images of these listings, consider creating a small placeholder image for the listing and presenting this image to the user, as shown below: 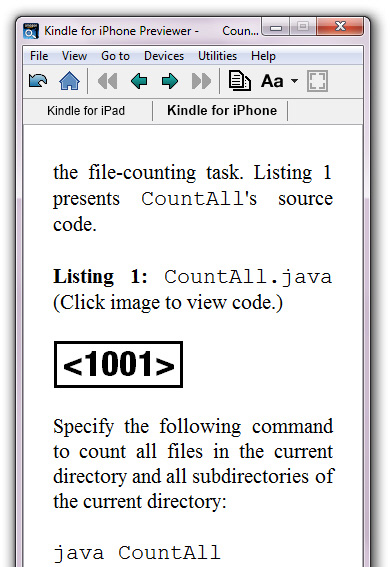 The reader can click the placeholder image to view the code listing via the device’s browser.

Here we see a small placeholder image (<1001>) for a code listing in the context of the iPhone simulator. Clicking the image causes the device’s browser to run and present the code, which you would host on your website, as shown here: 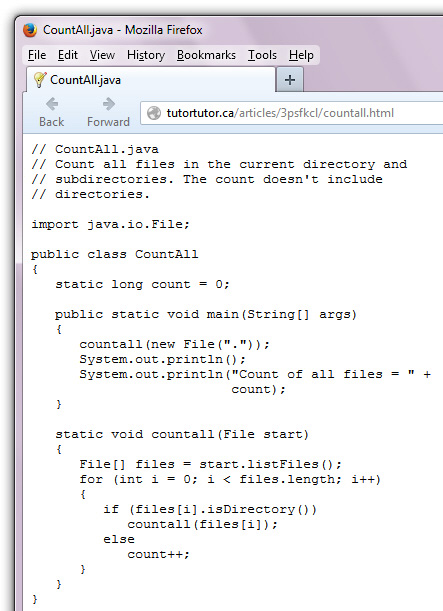 Firefox displays the CountAll.java code that’s hosted on my website.

To alter our HTML to use this method, again we would either replace the <pre> section in the original code, or replace the image we used in our first solution:

Here we include a linked placeholder image, which is stored in code.png. When you click this image, the device’s browser presents the contents of http://tutortutor.ca/articles/3psfkcl/countall.html.

Introducing a clickable placeholder image in lieu of individual code listing images is an improvement. Not only is the resulting e-book smaller (thus minimizing the Amazon delivery charge), that solution lets you leverage the device’s browser to better view the code.

But I think we can do even better. For example, we could present code listings on the Kindle Paperwhite and Kindle Fire devices, which have wider screens, and we could present placeholder image/clickable links for other Kindle devices (with narrower screens).

Newer Kindles offer better CSS styling support, which lets you present nicely-formatted code listings. You can determine whether a newer or older Kindle is being used by leveraging Amazon’s CSS media queries.

Amazon supports the following media queries for distinguishing between Kindle Fire-class devices and other Kindle devices:

You would use these media queries when setting up CSS styling for a Web page. For example, check out the following CSS:

This chunk of CSS introduces kf8content and mobicontent class selectors (the names, of course, are arbitrary). Any element whose class attribute is set to kf8content will be displayed as a block element. In contrast, elements set to mobicontent will not be visible.

The amzn-kf8 media query, on the other hand, applies to KF8-supported devices only. This adds styling to the <pre> element so that code listings appear in a thin bordered area and have a pale yellow background, which will be seen on Kindle Fire devices only (the Kindle Paperweight shows a light grey background).

The overflow:hidden declaration prevents excess horizontal text from wrapping to the start of the next line. Instead, any extra text is cut off on the right side of the border. This is especially useful when the user increases the size of the device font.

The following code fragment shows you how these media queries would be used in a CountAll context:

Note: I don’t use paragraph elements (<p>) in the body because they don’t leave blank line separators on all Kindles. Also, some Kindle devices/apps indent each paragraph. Rather than having to style these elements to omit the indentation (e.g., <p style="text-indent: 0">), I’ve opted to use <br> elements.

The image below shows you what you would see on the Kindle e-ink device simulator: 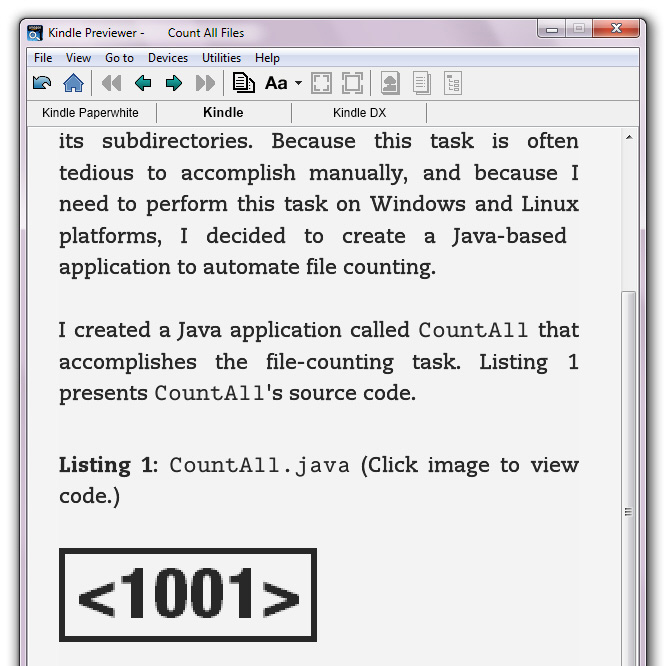 And the next image shows you what you would see on the Kindle Fire HD device simulator. 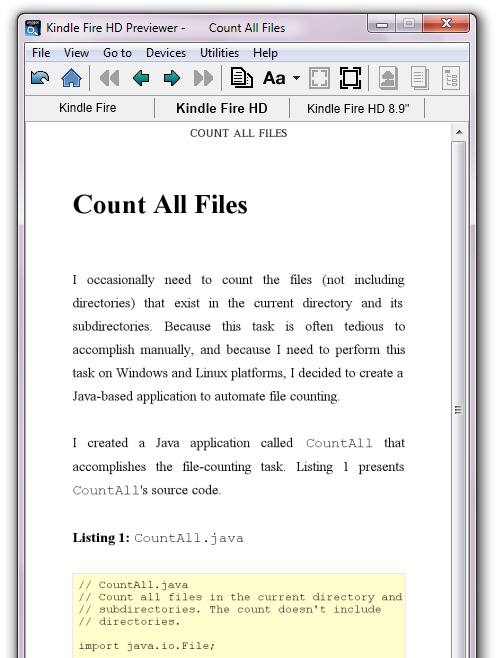 In this article, we looked at 3 strategies for viewing nicely formatted code listings on Kindle devices. Each has its pros and cons, and depending on your situation you might prefer one over the others based on the factors we’ve discussed here.

For brevity, I didn’t explore other possible strategies. If you know of another solution, please share it in the comments.

You can download all the code for these three solutions at this location.

HTML5 Browser Storage: the Past, Present and FutureCraig Buckler