Pasadena, California-based Central Desktop, which provides an SaaS collaboration and project management suite, is today announcing its “summer release,” which most prominently includes a new database API. The release is important because it will allow the three year old company’s 175,000 users to push data out to third party applications, and to suck data back in from external apps as well. The API will also enable third parties to create mini-apps that run inside Central Desktop workspaces.

Founded in 2005, Central Desktop does about $2.5 million in sales per year, and hopes to grow that to $100 million in yearly revenue within 5 years. In order to realize that growth, the company took its first round of funding last March — $7 million from OpenView Venture Partners. Central Desktop operates in a crowded marketplace with 37signals, activeCollab, Huddle, and Microsoft, but scored a major public client this year when the campaign of US presidential candidate Barack Obama used their wiki-based software to organize volunteers in California and Texas.

The new API adds much-asked for functionality, CEO Isaac Garcia told me. Running contrary to the “less is more” mantra that many web application developers ascribe to, Garcia told me that his customers have been asking for more hooks into outside software and services, beyond the couple that the company already provides (Central Desktop hooks into EditGrid, for example). So the new database API will allow developers to import to and export data from Central Desktop.

Actually, the software has had built-in database creation tools for many months, but the data was for the most part siloed and stuck within Central Desktop. Importing and exporting data was a tedious, manual process. With the new dynamic database API, though, all that can be automated.

According to a press release, the new API can be used to accomplish the following:

Central Desktop is also releasing two mini-apps that will be part of the default install. Because two applications, a time tracking app and a help desk app, are built on top of the new database API, they’re editable from within Central Desktop. Garcia showed me how easy it was to add new fields to the database that the applications interact with, adding for example, a way to track expenses along with time. 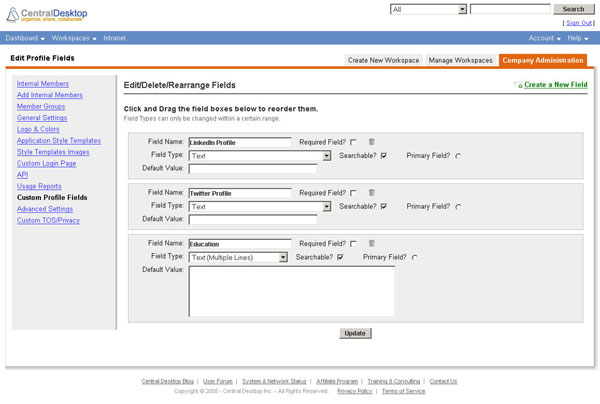 I asked Garcia if the ultimate goal was to create something like the Salesforce.com platform (Central Desktop is actually a member of the Salesforce AppExchange) in which third parties would develop applications on top of Central Desktop and customers could pick and choose which to install. He told me that eventually, that very well could be the direction that developers take the API and he’d be happy with that.

For now, though, the goal is to build hooks into the services that customers have asked for the most — such as the ability to interact with Quickbooks or import data from LinkedIn — and help customers build services themselves for sucking data from or pushing out data to external applications. Garcia said that Central Desktop has been speaking with a number of companies about building applications with the new API but couldn’t say who.