Twitter is a wonderful and information rich beast. I wanted to combine some of the powers of visualization, Three.js and its VR capabilities with Socket.IO and Node to create a pretty world of particles generated via a Twitter stream.

I’ve previously discussed all the basics of developing virtual reality web experiences in the SitePoint article Bringing VR to the Web with Google Cardboard and Three.js, so if you are new to this whole idea – read that one first and come back. This demo uses the same foundations.

The demo we will be building will watch a live Twitter stream for a keyword. When one is tweeted out whilst it is watching the stream, it will bring up a “tower” of shining particles that represent how long the tweet was. This demo in particular will look for mentions of the word “pizza”. Why pizza you ask? I was looking for a term which was not mentioned as frequently as “bieber” but more frequently than “boxcar racing hyenas”. In short, the best terms are ones which are relatively frequent enough that they’ll appear whilst you are watching, but not so frequent that they come through at many hundreds a second. Pizza is one of them.

If you’re keen to get straight into the code and try it out, you can find it here on GitHub.

Want to try it in action? I’ve got a running version hosted here: VR Twitter World.

We’ll begin by looking at our Node server code. It will display our flat HTML and also operate as a Socket.IO server that’ll pull in a stream of data from Twitter.

The full server is relatively short and looks like so:

Our first lines set up a server using the Node Express framework. It’s a rather simple set up that is pulling in all our dependencies and preparing the app variable for us to access our server functionality. port sets up which port we want our server to run on (process.env.PORT is a server variable some hosting set ups like Heroku will have defined).

Then we set up the io variable whilst simultaneously starting up our Socket.IO server functionality, attaching it to the Express server we set up above:

The config variable is a nice way of keeping the application’s Twitter authentication keys and access tokens in their own file. In order to live view the Twitter stream, we will be using an npm module called node-tweet-stream which provides all the functions we will need. We assign the object for our Twitter access and all associated functions to the t variable, passing in our config JSON to prove we’re allowed to access it.

Once you have an app, you can get your keys and access tokens by clicking the “Keys and Access Tokens” link that will appear on your app’s management page. If you can’t find it, it will be at the URL of: https://apps.twitter.com/app/0000000/keys (replacing 0000000 with your app’s ID).

Then, create a file on the same level as index.html called config.json. Within it, add the following with your own app’s values:

Further along in our index.js file, we set up calls to the root of our server to load /public/index.html:

We also have it serve up any other static files within the public directory on our server:

If we do have an error, we log that error in our server’s console and return a 500 error:

The following lines start our server running with all the settings above.

We then set up a callback function to run anytime the node-tweet-stream module spots a Tweet with that keyword. If it sees one, we log it in our server’s console log (this is optional, you could remove this if you’d like) and then emit that tweet out as a Socket.IO event to any connected clients.

If we have an error for any reason with our Twitter API, it’ll be logged to our server logs:

All of our server dependencies and details are stored within package.json as with all Node apps. If you are new to Node.js, you might want to read up a bit on what everything means: package.json.

Our front end code begins with the same set up from the Bringing VR to the Web with Google Cardboard and Three.js article – a Three.js scene that we display through a stereoscopic effect, bringing our scene into a VR view. To keep this short and sweet, I won’t cover the bits that are the same as the previous demo from that article. If you’re unsure of anything I don’t explain here, check that earlier article for info.

The only new JS file we will be adding in comparison to our previous foundation is our Socket.IO JavaScript file. It’s a simple one liner:

In order to access the functionality from Socket.IO, all we need is to assign that functionality to the io variable, as you’ll see a little further down in our index.html file:

We then set up variables for our “towers” (basically our vertical sets of particles that represent a tweet). All of our towers are stored within a THREE.Object3D object called tweetTowers. This is a container object that lets us keep track of all of our towers:

particleTexture and particleMaterial are our variables that will represent how our particles will look:

maxTowerCount is the maximum number of towers we want to be visible in our scene – if this is set too high, we can end up with a laggy experience. I’ve set it to 6000 as this sets the maximum particles to be around about a million. A reasonable number in my opinion!

range is how large of an area around the viewer we want these towers to be placed. The towers will be placed at random spots in the scene, so this limits how far apart they all are placed. I’ve found it is a nicer experience with them closer to the user. If they are further away from the user, it looks like there isn’t as many (despite there being thousands upon thousands of particles!). I set it to 100:

There isn’t too much that is new within our init() function. It mainly sets up our VR camera and controls as explained in the previous article. The new bits are at the end.

We define our particleTexture image to be a png called particle-new.png which we have within our public folder:

We finish the init() function by adding our tweetTowers container to our scene. With this in our scene, we don’t need to worry about adding any of our towers directly into the scene, we just add them into our tweetTowers object directly.

You’ll recall that once our server finds tweets streaming through Twitter with our keyword of “pizza”, it emits an event called “tweet”. Our client side JavaScript will now watch for that event and respond:

The response code is a call to a function called generateTower() that will add a tower to our scene representing that tweet. We pass it four values:

Our generateTower() function itself begins by defining a towerGeometry variable. This is a THREE.Geometry object that will contain the positions of all of our particles within the tower. Keeping all of the points tracked within one Geometry object can help keep processing times down, as Three.js only needs to track each tower object and its points, rather than a range of independent particles. Later in the code, we will provide the geometry to a THREE.PointCloud object which can interpret those points into our particles.

We then set up a JavaScript object called particleMovements that stores where our particles will start and finish within the tower, along with how far apart they’ll be (the values we passed in earlier):

We then iterate through the size of our tower to create each particle. We set the current co-ordinates for y to increase by our speed value multiplied by i. Our x and z values remain at their starting spots as we’re only moving upwards.

Finally, we define our tower’s point cloud within the variable of tower. We pass in our geometry containing the points we want each particle to appear on, as well as the material we defined above for each of them.

We add that tower to our tweetTowers collection object and then check to see how many towers are in the scene. If we have more towers than our maximum allowed, we hide the oldest one to reduce the load on the device. If you have any performance issues, chances are they’ll be a bit better if you reduce the maxTowerCount!

To run this demo locally, you’ll need Node installed and you’ll need to run the usual commands. Install all dependencies for the project:

In order to test this on your smartphone, you will either need to ensure your smartphone is on the same local network and find your computer’s IP address, or use a tunnelling service like ngrok (I cover how to use ngrok in the article on Accessing Localhost From Anywhere).

You could also host the Node server somewhere. I personally used Heroku, however this is completely personal preference.

Once you’ve got the server somewhere up and running, open up Chrome for Mobile and visit it! Put on your Google Cardboard or other similar headset and you should see an experience that after half a minute or so looks like this if you look up: 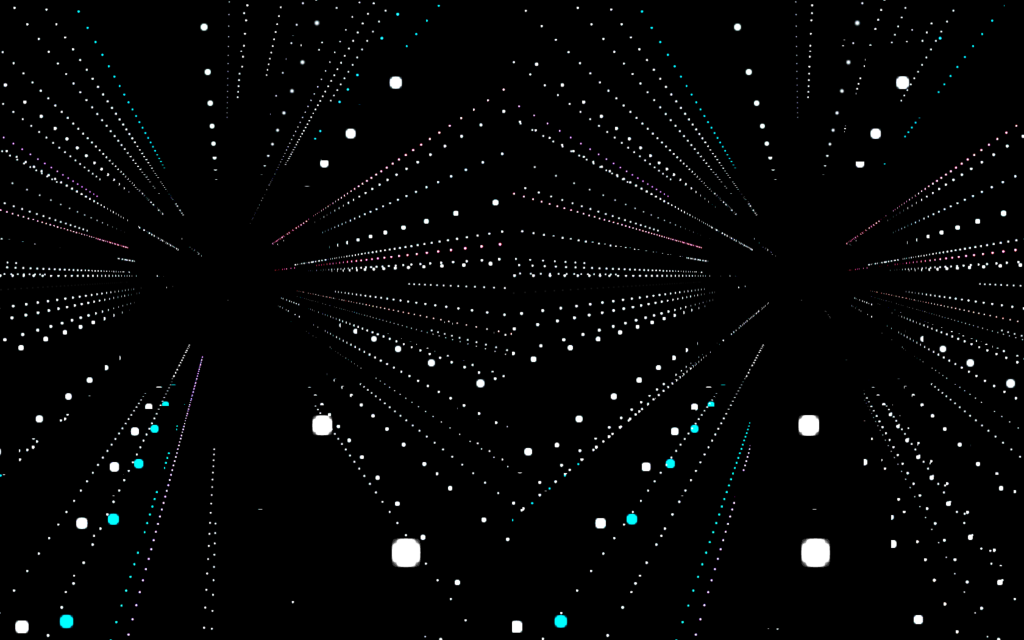 This should have given you a good overview of using Node, Socket.IO and Three.js to create a 3D web API enabled virtual reality visualization. The demo itself could be developed further, adding more keywords, filters, making it run smoother with more particles and so on. There is plenty of potential! Feel free to get out there and try to make your own fantastic experience from this demo!

I’ve also got other demos here at SitePoint that use similar concepts but instead brings them into an augmented reality experience. If you are interested, Filtering Reality with JavaScript and Google Cardboard explores taking in the camera from your smartphone and adding filters to it, and Augmented Reality in the Browser with Awe.js explores going all the way and augmenting elements into your field of view via the ever powerful combination of Three.js and Awe.js!

If you do take on the challenge of putting together your own VR visualization from the demo in this article (or combining it with elements from the AR examples mentioned), leave a note in the comments or get in touch with me on Twitter (@thatpatrickguy), I’ll get out my headset and take a look!

Stream Your Webcam to a Browser in JavaScriptColin Ihrig