Earning revenue while keeping users happy is a difficult balancing act that confronts developers of all kinds. In the vast and highly competitive mobile app market, finding the magic formula that satisfies both developers and downloaders is paramount to the success of your mobile software. Savvy developers are constantly searching for ways to gain and grow revenue from their mobile applications that don’t involve irritating or discouraging mobile users. Thankfully, quite a few brilliant entrepreneurs have taken notice of this developer’s dilemma and are offering some creative, unusual avenues for earning money that don’t involve bothering your users (and sending some of them away in the process).

As mentioned before, making users pay upfront for the use of an app can be a major point point. Along the same lines, broad, imprecise, one-size-fits-all banner ads rarely reward developers efficiently with revenue, and to make things worse, those bothersome, often-irrelevant advertisements usually pervade the entire app experience and take up valuable screen space. With these two typical (but uninspired) revenue strategies ruled out, there are still quite a few ways to reap well-deserved rewards for your development efforts…while keeping your users happy and active at the same time. 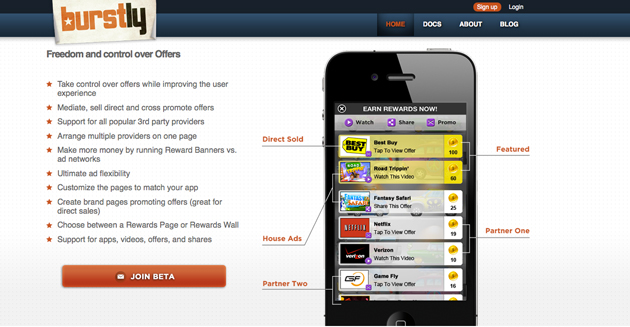 If you’re looking to do a little more than just throw up some basic banner adds and hope for the best, Burstly might offer the perfect toolset for your needs. Burstly’s tools provide developers with numerous ways to earn revenue without disturbing users and compromising the app experience. Burstly offers reward programs that truly integrate with your app, offering users the opportunity to choose promotional offers and be rewarded with currency or points, which could then be used within your app to unlock additional features or content. Users never have to view these ads, and more importantly, they never have to get out their wallets either.

Burstly also offers a storefront where developers can gain revenue through the sales of other apps, and they also cover traditional banner advertising capabilities with a far greater degree of control, so that you can be quite selective when it comes to which ads appear within your carefully-designed app. 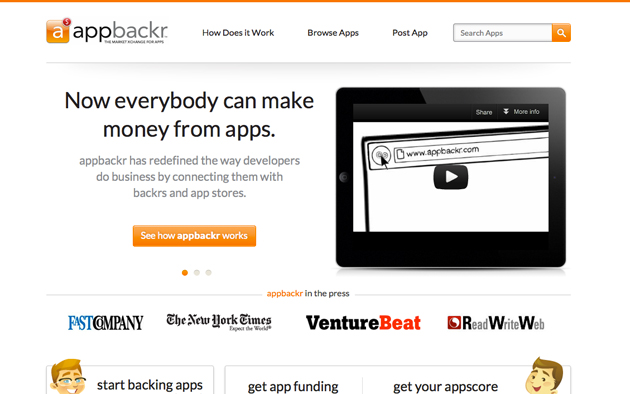 One largely overlooked source of app revenue is from investors. While it’s very common for apps to come from small development teams relying on “bootstrapping” to support their efforts, Appbackr has built a platform that allows apps of all sizes to secure upfront funding. Investors are paid back gradually, and developers enjoy the opportunity to obtain the funding they need to either finish and launch a new app, or garner a large lump sum from an app that’s already up for sale. So, even if you’re a small organization or even an individual developer, you may be able to get yourself out of a funding conundrum by selling your future app revenue to Appbackr investors. 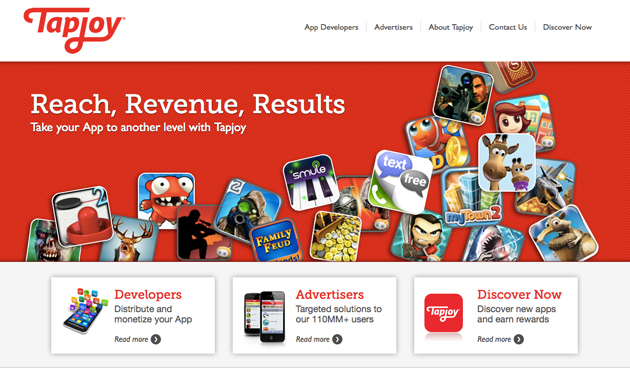 TapJoy is a community-based revenue platform that helps developers rapidly grow their user base and publish targeted advertisements that are more relevant to users and more lucrative for app designers. They allow users to choose advertisements (and ad formats) from a wide variety of options, which allows developers to build revenue into their app gracefully, without obstructing their users. Like Burstly, TapJoy also has an ad marketplace where users can complete in-app promotions for rewards like new content, new features, extra points, or in-game currency. TapJoy has more than 100 million active users within their community of over 20,000 mobile apps.

Vungle is a specialist in the realm of short video advertisements. For developers who are busy enough with their own app ambitions and don’t require a robust suite of revenue options or an endless list of choices, Vungle might be the ideal source of revenue. It’s a simple, lightweight advertising solution for similarly simple apps. If users are willing to pay for an ad-free version of the app, astute developers can offer both “free” and “pro” versions to accommodate both paying customers, as well as those willing to tolerate brief video advertisements. Developers, price-sensitive users, and paying users all get what they want. 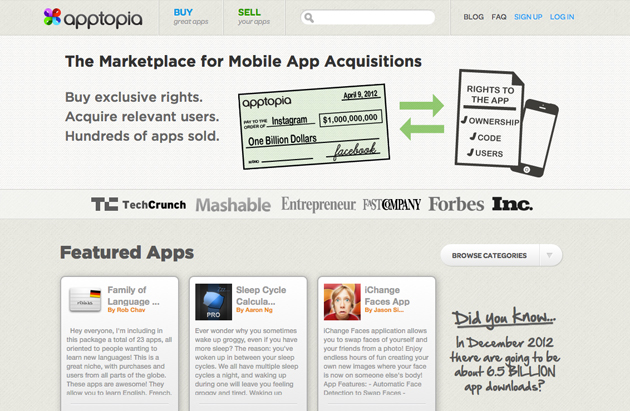 Another overlooked and particularly final source of revenue involves the option of selling your app entirely. This doesn’t always occur to developers, as it seems to involve legalities, paperwork, and intellectual property transfers, not to mention letting go of your lovingly-crafted brain child. Despite the aversion to selling an app outright, Apptopia has made the process of buying and selling apps—the whole app; not just a user license—very easy and straightforward. Buyers can view various app listings and metrics, and developers can review and accept offers from interested app investors.

While this option may not be an ideal long-term strategy for revenue, it may be perfectly suited for those who are looking to shed old apps and focus on their latest creations. As you might imagine, selling the ownership, code, intellectual property, and user base can get you the equivalent of thousands of individual app license purchases. Many developers overlook the time cost of maintaining and upgrading their apps, and Apptopia might be a great way to slim down your app catalog while still reaping a fair reward for your efforts.

Do you have any unusual revenue techniques that don’t involve charging your users? Are you averse to selling future profits from your app? Would you ever consider selling your app entirely?