Some people think that IE6 is dead already. But only developers who have the luxury of a specialist audience, or who don’t have any business interest vested in their work, can think like that. For the rest of us, who have a real-world audience of ordinary, non-technical users to think about, IE6 is still very much a going concern.

But maybe not for much longer. Now that IE8 is out we’ll see a greater number of users finally upgrading; there’s no doubt that Microsoft wil be pushing for this, and pushing hard. Quite apart from that, we’re seeing a slow but steady progression of users moving away from Internet Explorer altogether, and turning to Firefox and other browsers; Arstechnica recently reported that Firefox usage is overtaking Internet Explorer in Europe for the first time. Inevitably, there will come a time when IE6 has a sufficiently minor audience that we can treat it like we did Netscape 4 a few years ago — as legacy technology that it no longer behoves us to support, and its remaining users as willfully stubborn individuals whom we’re not required to pander to any longer! 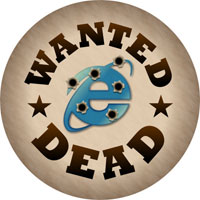 (It’s funny really. You wouldn’t go into your local mobile phone store and complain that the handset you bought in 2001 doesn’t work on a 3G network and you can’t get picture messaging on it. Yet for some reason, a minority of web users do behave exactly like that.)

Anyway, by my estimation, the day is approximately 12 months away when we’ll be able to kiss a fond goodbye to IE6 support forever. And when that day comes, here are some useful things we’ll be able to do that we couldn’t really do on mainstream sites before:

But 3 Things We’ll Still Have To Wait For

Sadly, there are still plenty of things we won’t be able to do with impunity until IE7 is also just a memory!

So mark the day in your calendar, for early in 2010, when the fuller potential of CSS will finally begin to emerge!