Xara Web Designer 6 is a WYSIWYG web site designer. Just to be absolutely clear, this is not a paid review nor do I or SitePoint have any affiliation with Xara, their corporate partners, staff, relatives, etc.

Note that Web Designer 6 is not a Dreamweaver or Visual Studio replacement. It’s a purely visual design application — you cannot add your own code or examine the HTML until it’s exported … more about that later.

Web Designer 6 is available for Windows XP, Vista and 7. If you’re running older hardware, you’ll be pleased to hear the requirements are low: just 256MB of RAM and 150MB of disk space. However, many of the templates are included in a separate download so a little extra disk space is required should you use them. The price is also reasonable when compared with some of the wallet-busting competition: Web Designer 6 costs $49 / £39 / €39.

In essence, Web Designer 6 contains many of the features in Xara Photo & Graphic Designer, previously named Xara Xtreme (see my developer review and Jen’s designer review on SitePoint). The interface and feature set is almost identical but there’s more emphasis on web publishing. Web Designer 6 could be more appropriate for your needs and it’s half the cost of its bigger brother.

Installation is painless and, fortunately, Web Designer doesn’t register itself as the default application for every web-related file. You’ll soon be looking at the new dark-style interface: 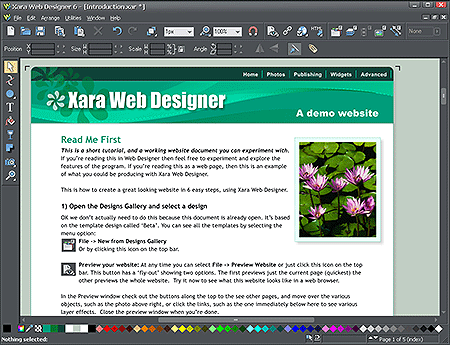 Dark interface themes have been adopted by Microsoft for Expression and Visual Studio. They are appearing everywhere and, although it’s largely cosmetic, Xara Web Designer looks far better. The layout and tools will be immediately familiar to anyone who’s used another Xara product. There’s an over-dependency on pop-up windows and the interface can feel a little clunky compared with Adobe or Microsoft products, but there’s nothing fundamentally wrong and many Xara users appear to like it.

Unfortunately, the web development aspects appear to be tagged on to the main DTP application. Creating pages is easy, but you can only develop fixed-width designs and preview them using the internal IE-based web browser.

There’s a useful Designs Gallery which allows you to import themes or widgets such as Wufoo forms, Google maps, PayPal buttons, YouTube videos, Flickr photos, Twitter updates, and RSS feeds. However, if the widget you require isn’t available, it’s not possible to insert the yourself. The application allows you to resize a widget in the design view but that can cause problems which are not evident until you preview or export the site.

Your completed site can be exported to HTML. The results are impressive: pages look almost identical to the original design and work in most browsers. Even IE6 looks great and transparent PNGs are supported. Text remains as HTML, graphic formats are used appropriately, and validation errors rarely occur.

However, HTML conversion is achieved by making every graphic and line of text (not paragraphs) into absolutely-positioned elements. It’s HTML spaghetti — you won’t want to edit it by hand — and the lack of semantic mark-up could be an issue for search engine optimization and accessibility. Finally, Web Designer 6 struggles to re-import the HTML code it exported — remember to keep your original project files in a safe place.

I like Xara Web Designer 6. It’s ideal if you never intend learning HTML or want to produce rapid prototypes. Even programmers may like its simple graphic and Flash production facilities, but you’ll soon return to your IDE when it comes to developing the final web site code.

If you’re not sure whether it’s for you, try the Xara Web Designer 6 30-day free trial.