Xara Xtreme 5 is an Illustrator-like graphics package. I’d normally leave a full review to Jennifer, but Xara have made some bold claims about features for web developers in this release. Note that I am not affiliated with Xara, they do not advertise on SitePoint, and Xara has not paid for this review.

What is Xara Xtreme?

Xara is feature-packed and it’s a little difficult to know who it’s aimed at. It’s primarily a vector graphics package, but also offers:

The most noticeable feature of Xara Xtreme is its speed. There are no long loading times and the application remains responsive throughout.

Xara Xtreme is not a Dreamweaver replacement and web pages are treated almost identically to standard DTP pages. You start by choosing a page size (640, 760, and 955 pixel width defaults are offered), then add graphics and text objects. Fluid and elastic designs are not possible — the page height can be adjusted by dragging if you need more or less room. 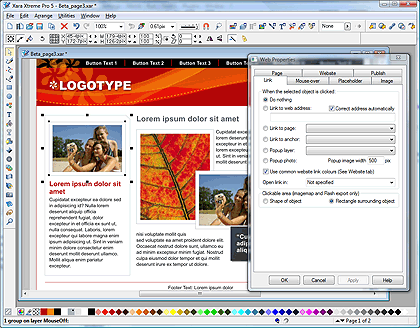 The main web-specific features are:

Unlike many HTML-exporting applications, Xara does a reasonable job. Text remains as HTML, graphics are used appropriately, the code works in all modern browsers, and there are no dubious validation errors. Unfortunately, conversion is achieved by making every graphic and line of text (not a paragraph) into an absolutely-positioned element. Roll-overs also require JavaScript rather than basic CSS.

The HTML works, but it won’t win any accessibility awards or enhance your SEO campaign. However, it is certainly an option for hobbyists or professional designers creating web page prototypes.

Xara provides simplistic Flash banner production — do not expect an ActionScript IDE or game-creation tools. Flash is created on a fixed size “animation” template. You can then add separate frames with named text and other objects.

I like Xara Xtreme. It takes a little while to understand if you’re an Adobe or Microsoft aficionado, but the Xara gallery provides an amazing set of photo-realistic vector drawings showing what can be achieved.

Xara Xtreme is a jack of all trades, but it could not be considered a ‘master’ of vector graphics, bitmap editing, 3D, DTP, Flash or web page production. However, the fact that it’s capable of so many tasks at such a low price makes it an attractive proposition for small companies and freelance developers.

Xara Xtreme can be downloaded and purchased from Xara.com.