Some people will tell you that we are in a so-called “post PC” era, but that’s not really true. The personal computer has just started to take on different forms, because the smartphone in your pocket or the tablet in your backpack is just as much a “personal computer” as the desktop PC that you have at the office. And since the smartphone and tablet are being used to hold all sorts of different files, it only makes sense that you would want a suitable file manager to deal with all of them.

Depending on the version of Google Android installed on your device, you may already have a file manager of some sort or another, but X-plore File Manager by Lonely Cat Games is likely much more robust, giving you more of the look and feel of moving files around on your regular computer.

While there are many other features, some of which I’ll discuss in just a moment, perhaps the biggest feature for X-plore is that it is a dual-pane file manager. 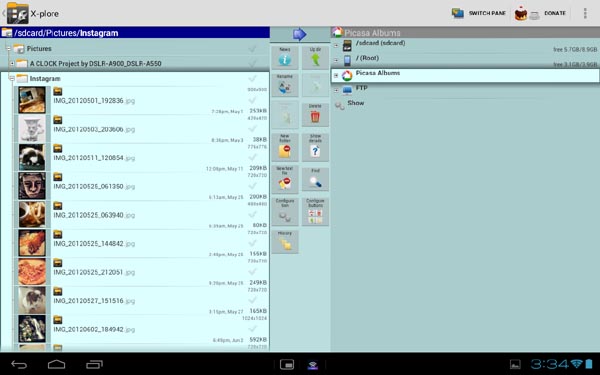 In this way, you’re able to browse and navigate through your files for both what would be the source, as well as the destination. You know how you usually open two windows on your computer and just “drag” the files from one folder to another? This dual-pane layout effectively lets you do the same, except you simply use the multi-selection “tickboxes” to choose the files and then tap on the “copy” or “move” icon accordingly.

What’s great is that you also get a familiar “tree” style view, showing the full file path. Perhaps you have a folder on your Android phone called “Work,” and then under that you have another folder called “Projects,” and then under that is “TPS Reports.” You’re able to drill down through this hierarchical file system, just as you would on your Windows PC.

Doing More with Your Files

But, you’re not just getting the filenames. In the instance of picture files, you get a little thumbnail. You can then view the image, complete with the ability to zoom or slide, all without leaving the app. There are also built-in viewers for video files, audio files, and text files. You can even view APK files as ZIP, and it is possible to display hidden files too. 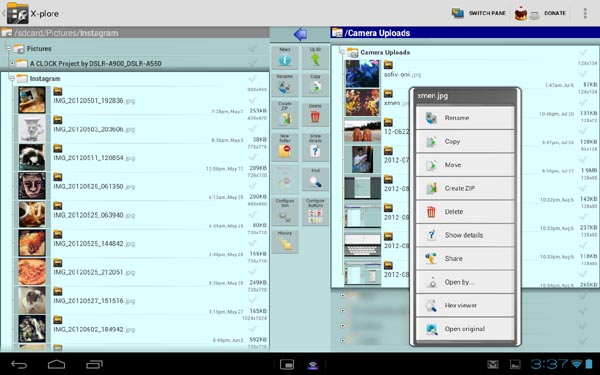 Whether you select a single file or you use the multi-select to choose multiple files, you can tap and hold to bring up a number of possible options too. The most straightforward are functions like renaming, deleting, copying, and moving, but it’s also possible to create ZIP files, share files (through every “share” option that you’d have with other apps), and more.

The buttons that line the space between the two panes give you even more options for creating new folders, creating new text files, finding files, configuring buttons, and viewing your history. It’s all very robust, but that could be almost viewed as a problem. Having this great dual-pane view with so many features is fine on a tablet, but it can get very cramped on a smartphone display (where you really only see one pane at a time). You can potentially tap the wrong icon or the wrong text field by accident, but that’s the price you pay for being able to see as much as you do here.

Works with FTP and Cloud Storage Too 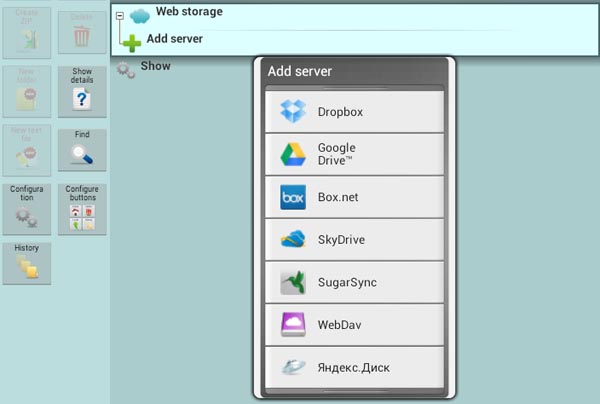 The great thing is that it doesn’t stop there. X-plore is also pre-configured to work with your Picasa photo albums, which would already be connected to the Google accounts you have registered with your device. When you tap on “Web storage,” another option shows up to add a web storage server.

Yes, this includes several of the most popular cloud storage services out there, like Dropbox, Google Drive, Box, SugarSync, and SkyDrive. If you already have the Dropbox app installed on your device, for instance, all you have to do is tap on Dropbox as the server you want to add and then agree to grant X-plore permission when the corresponding window pops up. Yes, it’s true that you can use the Dropbox app itself to move files back and forth, but again, this dual-pane layout makes everything just so much easier.

X-plore also works with FTP, SMB, and SQlite. This includes support for secure FTP (FTPS), and you can even configure multiple servers. This is very handy for people who are storing files on their own web servers, because it means that you can quickly and easily move files back and forth. You get all the same kinds of functions—like the image thumbnail and the ability to create ZIP files—as you would with locally stored files. This is also true of being able to access shared folders on your LAN.

A Much Better File Manager

To be honest, X-plore File Manager for Android is not going to be the prettiest app on your device. It’s very utilitarian in nature, so you’re not going to get pretty swipe tools and flashy icons. At the same time, it does its job incredibly well, making it almost as easy to manage files on an Android device as it is on a full-blown PC.

The kinds of users who want this level of access and utility are also likely the kinds of users who are willing to look past a less-than-gorgeous user interface. The people who want the simple and hands-off approach likely won’t be interested in this and that’s fine, but for those us who do, this app is pretty great. Even better, X-plore is free in the Google Play Store. You can’t beat free.