When you’re writing frequent posts on your WordPress website, you know that many times you’ll need to embed external content.

Whether that is a video from YouTube or Vimeo, a music clip from SoundCloud or Spotify, a Tweet or a Vine, a Flickr on an Instagram, there is not much to be done. You simply copy and paste the URL you want to embed into your WordPress article and that’s it.

This article will go through all of the details related to the WordPress embed and oEmbed functionality.

Why Does WordPress Need an Embed Feature?

One of the things which WordPress does really nicely when compared to other CMS’ I’ve used, is its ease to embed external media.

Without mentioning any names, embedding a simple a YouTube video into an article using one of the most popular CMS’s out there (other than WordPress) can be a nightmare of epic proportions.

Side note: this is a plea, not a dig. Embedding a YouTube video into an article should be a breeze in any CMS.

Why does this happen?

If you want to embed a video from YouTube for example, you would need to embed the following syntax:

So what’s the problem with that?

Nothing is actually wrong with this specific code. However, allowing anybody to enter iFrames into your posts is a serious security risk.

Why is it a security risk you may ask?

Whilst embedding a YouTube iFrame is fine, an iFrame can be used to reference ANY site. Users with malicious intent may actually embed an iFrame which references a site which is hosting malware.

To top it all off, iFrames can be hidden as 0 x 0 size pixel (an invisible dot), which makes it very hard to detect, at least with the naked eye.

Hence, why iFrames are discouraged in areas where user input is allowed.

In other CMS’, where the type of embed supported by WordPress is enabled, you can embed external media by doing one of the following:

How Does the WordPress Embed Feature Work?

The WordPress embed feature works by implementing the oEmbed API – essentially this is a way in which a consumer website (such as WordPress) can display embedded content from a provider (such as YouTube).

The consumer sends a HTTP request to the provider, and the provider replies with a JSON or XML HTTP response with the data structured in such a way as to allow the embedding of that media into the consumer website.

This is the request:

And this is the response:

This is of course something which happens behind the scenes.

Now that we understand the functions behind WordPress, let’s see a few examples of media which can be embedded into a WordPress post.

Rather than having to use the normal syntax associated with embedding a YouTube video, which is something similar to the following: 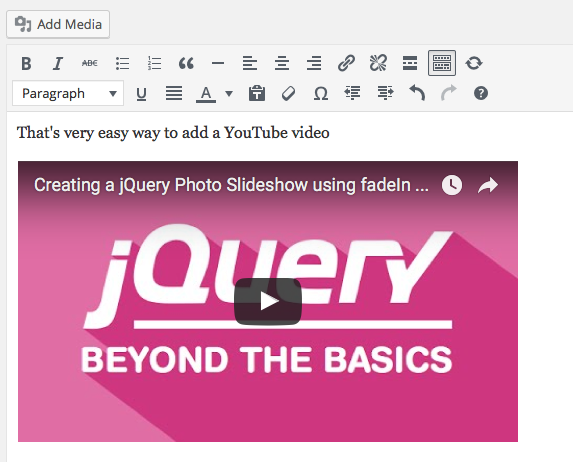 Just make sure it’s not actually converted into a hyperlink.

You are now able to see a preview of the video in the editor. 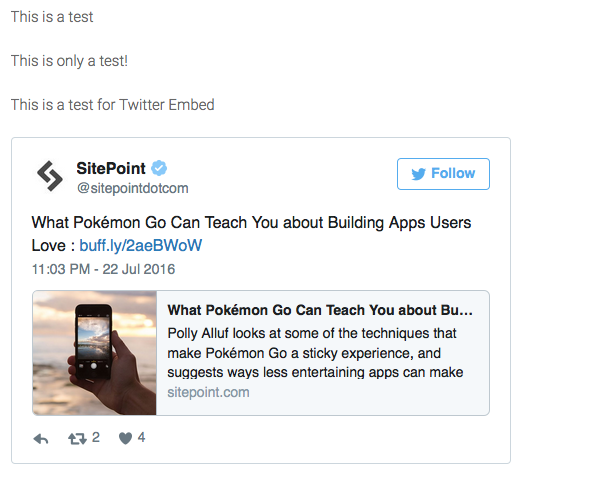 This all happens automatically without needing to mess around with tags and blockquotes and iFrames and whatever else.

Let’s embed a SoundCloud file into our post. Once again, it’s just a question of finding the URL of the file you want to embed and pasting it into post.

You can see from the screenshot below, as soon as we entered the URL into the post, we immediately get a preview of the file which is going to be embedded into the post. 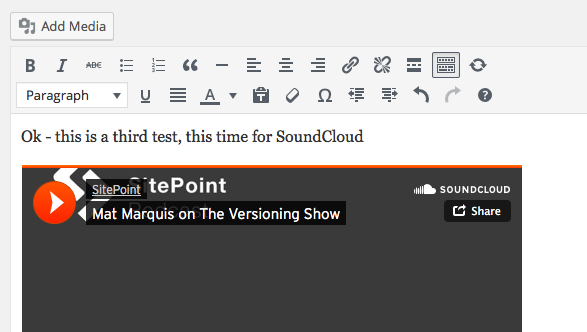 We could keep showing various other examples, but we’re sure you got the point.

In theory there is not much need for styling. The WordPress oEmbed feature is able to cater for most of the styling. It also handles responsiveness of your theme, so you don’t need to really worry about that either.

In practice though, there might be some need for you to actually size the media you are embedding.

The WordPress oEmbed functionality is in reality being handled by the [Embed] shortcode .

Using the [Embed] shortcode, you can set the maximum dimensions that a piece of media can take. These are not fixed, because of course we want the post to remain responsive.

Enable Media from Other Sites to Be Embedded

We mentioned a few paragraphs up that WordPress does not allow embedding of media from any site for security reasons.

However, if you want to embed media from a website which is not supported, you can of course do that.

To do this, you’ll need to add the site to the internal whitelist.

There are two ways of doing this, the method which you should use depends on whether the site supports the oEmbed API or not.

In the functions.php file of your theme or plugin where you want to allow the embedding, call the following function to add a new site to the embed provider whitelist.

If the media can be embedded via various URLs, you can use a Regular Expression to describe the various URLs possible. If we wanted to add our fictioutious site, TheNewTube with a regular expression, we could use the following:

If the site you want to embed does not support oEmbed, you can still add them as a provider.

Again, through the functions.php file, you need to register the site using the wp_embed_register_handler

You’ll also need to provide a callback function, that would be used to generate the HTML required to embed the media.

The WordPress codex provides an example of how to do this to embed video from the Forbes website:

If you need to do this for your site, it would be best to consult and hire a WordPress developer, just to make sure you don’t introduce any bugs which could break your site.

WordPress as an oEmbed Provider (Since WordPress Version 4.4)

Up till now we were only discussing WordPress as being a consumer of media from 3rd party sites, in reality WordPress was the oEmbed consumer. 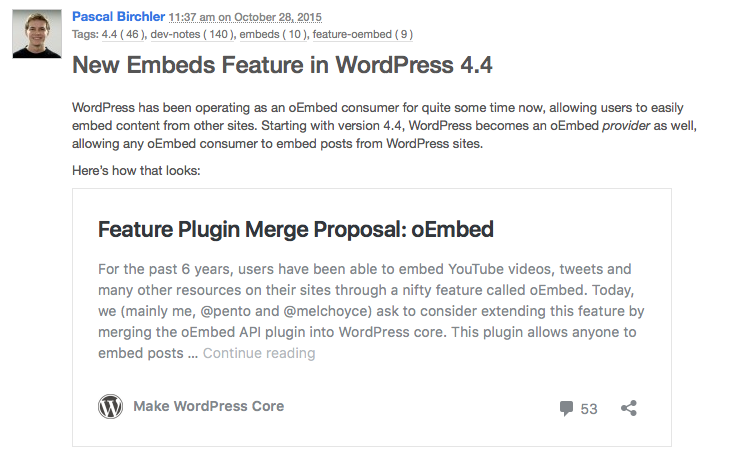 Since 4.4, WordPress can also act as a Provider of oEmbed content.

What this means is that any public posts, or post types on your site can be embedded into third party websites via your own WordPress website (typically via their pretty permanent URL with an embed added to the end of the actual URL – example.com/your-post/embed/).

For security reasons, embeds reside in a sandboxed iFrame, however the content of the iFrame is a template that can be styled or replaced entirely by the theme on the provider site.

Functions and Hooks for Using Embeds

Here are the four most useful functions related to embeds:

The X-WP-embed:true header will be also be sent when that template is used. This makes it easier to target embedded posts in any application which is consuming WordPress oEmbeds.

As we’ve seen in this article, the embed features of WordPress are quite rich in scope. Both for a writer and for a developer, there are plenty of ways in which WordPress embeds can be used to enhance content with embedded media.

Have you used WordPress embedding in any creative ways? We’d love to see and share your examples.

Meet the author
David Attard
David is an inquisitive web designer who frequently shares his tips and tricks at CollectiveRay . When he's not blogging about web design, something he's been into for the last 12 years, he's usually dreaming about his next big thing.