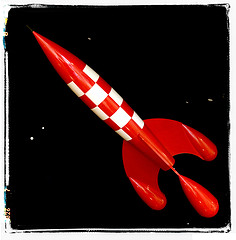 I’ve designed many book covers for SitePoint – mostly without incident – but we did have one uncomfortable moment back in 2008.

Tasked with designing the cover for a new PHP book, I decided that a clutch of shiny, colored rockets – red, green and blue – might be a nice look. Fun, shiny and a little retro was the idea.

I trawled the big, reputable stock photo sites and eventually purchased a 3D render of a red-chequered rocket (similar to the one above). After a little Photoshop persuasion, I had added green and blue rockets to the composition, and not long after, voila! – we had a book nice cover.

End of story – or so we thought.

About 10 months later we received a letter from a legal firm representing the Tintin licensing rights empire claiming financial damages from infringement of their product.

This came as somewhat of a shock to us as:

a). Growing up with little awareness of TinTin, the rocket was just a ‘generic rocket’ to us. In fact, only two of the original 24 Tintin books featured the rocket, so you could have quite easily read some Tintin without ever coming across the rocket.

b). We’d purchased the image from one of the largest stock sites on the planet (no names, but you know them).

Checking back across the stock sites, the rocket image and any image like it had since disappeared – presumably after similar letters.

At the time we sought legal advice and eventually came to an agreement, removing the image from subsequent books.

After a little research it turned out that Moulinsart SA, the Belgium-based company that controls the Tintin licensing rights, are famous for their fierce pursuit of anyone they believe to be infringing the Tintin IP.

Over the years this has included many Tintin fan clubs, websites and zines, and this has made the company particularly unpopular with many of Tintin’s biggest fans.

But as they say, discretion is the better part of valour, and Moulinsart are a multi-million dollar enterprise accustomed to getting their own way.

The Art of Rocket Science 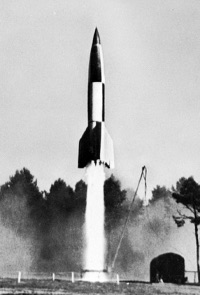 I thought it might be interesting to try to get a sense of the world that the red rocket design was born into. According to his biographer, Tintin’s author, Georges Prosper Remi (Hergé) was originally inspired by the German V2 rocket program in the recent war.

The V2 ‘flying bombs’ were bleeding-edge technology in the 1940’s so prototypes were painted with a black and white checkered pattern to make high-speed film analysis easier. Hergé continued the checkers motif in his renderings. 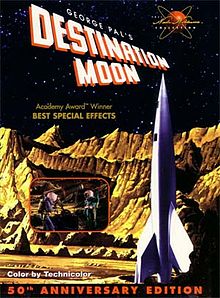 The film won an Oscar for special effects and the screenplay was written by sci-fi great Robert A. Heinlein (Starship Troopers), who adapted parts of his earlier Rocket Ship Galileo for the movie. You can watch it on Dailymotion if you like.

Although it may look a little naive today, there was no expense spared in the creation of the sets, costumes and special effects for Destination Moon. At that time it was easily the most scientifically accurate depiction of space travel ever portrayed on film. The movie was a very big deal at the time. It even has a Woody Woodpecker sequence to explain the science of space travel.

In fact, Youtube has a fascinating KTLA TV broadcast live from the set of Destination Moon, where two presenters interview the cast and crew while touring the sound stage. At one point George Pal has to correct one of the presenters after he off-handedly refers to a moon mission as ‘fantasy’.

Later Bob Heinlein matter-of-factly tells the still incredulous presenter that nothing other than investment is preventing work towards a moon landing. This footage really does give you a sense of where the public perception of space travel was in 1949.

Although the first instalments of Tintin’s space adventures (March 1950) printed three months before the film’s official release (June 1950), the feature film had a longer lead time and Hergé’s biographer Phillipe Goddin says Hergé was very interested in the film and had access to pre-release stills.

Everyone has influences and inspirations. There’s nothing wrong with that.

But Wait. There’s a Twist…

This week a court ruled that Hergé had, in fact, signed the rights to Tintin over to his original publishing company way back in 1942.

The court’s decision means Moulinsart never owned any of the rights they have been so vigorously asserting.

According to the Hague court ruling:

“It appears, from a 1942 document … that Hergé gave publishing rights for the books of The Adventures of Tintin to publisher Casterman, so Moulinsart is not the one to decide who can use material from the books.”

Why are you telling us?

Intellectual property rights is an area that impacts us all in some way. We all consume IP – music, film, print, software and fashion – and most of us produce it in some way too, so it will never stop being relevant. The onus is on all of us to search for the line between fairness and farce.

Of course, whether I performed a small, vigorous fist pump and hissed ‘Yesssss!…’ when I read about the Moulinsart decision will always remain open to speculation.

But I’m certain someone, somewhere did.

Learn How to Create a Retro TV in IllustratorAnum Khan