There are universally accepted best practices in graphic design that apply to all mediums.

Likely you’ve heard the term ‘negative space’ before – it’s one of those practices used by designers all the time. If they did it right, you probably didn’t even notice it. It tends to be a technique used to draw your attention to the message, or the theme visual, adding to it’s impact.

It’s a little counter-intuitive when you have a lot to communicate – it’s hard not to be tempted to use every pixel. The good news is, if you can grasp the idea of negative space, you’ll better understand how and when to use it.

The term “negative space”, in a graphic design context, is a little misleading. It sounds like you’re describing space on your page (real or virtual) with nothing in it.

There’s plenty of “something” in that space, and when used with purpose, it’s resulting effect is anything but “negative”.

Negative space is a roadmap through your design and communications, showing the viewer the important stuff they need to know, or want to see.

It works a little like a photograph with some blurry areas, and one very sharply focused area. Your mind intuitively knows to ignore the blurry and go to the sharp.

Our brains are set to seek out familiar shapes and patterns, like recognizing someone’s face, a particular tree, or your pet cat from the neighbour’s cat.

Negative space in design sends your brain the same signals. When an empty space is interrupted by an element, your eye is drawn there.

The most basic, practical way to understand negative space is to imagine a logo, top of your page, centered, and about 15 to 20% of the width of your browser.

Importantly, there’s nothing on either side. So, where do you look?

Answer: Right at the logo.

That’s how negative space works. It’s the ‘nothing’ that takes you right to the something.

So, all page elements should have space?

That said, there’s an important distinction to make between elements worthy of negative space, and those not.

A logo? Excellent candidate for a negative space treatment. It’s an important element.

Date of published article? Well, not so much. when an element on your page is given a region of space on it’s own, it immediately reads as “more important” than the other elements on the page that conform more conventionally to the flow of the layout.

So, logos, headings, section titles, important visuals – all elements with the proper level of importance for a negative space treatment. 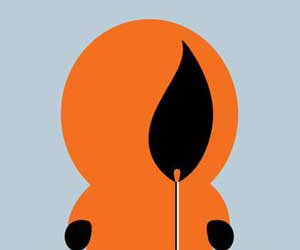 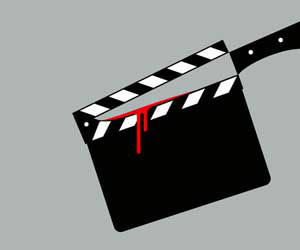 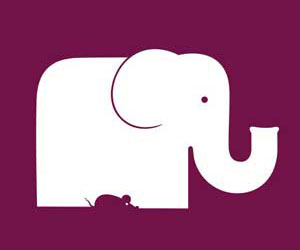 Going beyond the simple logo example I mentioned above, the more advanced applications of negative space are a little harder to grasp, but very powerful when used properly.

Negative space can create a trick for the eye – one that might take a moment for your viewer to catch, but when they do grab it, they’ll appreciate your cleverness.

I’ve included some examples of what I mean.

Another application of negative space is to dramatize a theme visual, like an important portrait or key visual. This is often used together with either a theme headline or brand tagline.

This is a little harder to pull off when working on an average, everyday project, but on a gig where your client wants a little something more “upscale”, this can work nicely.

Here an example of it in action (image used with permission from the photographer, Anthony Taylor).

Likewise, horror movie posters artists have been some of the most masterful exponents of this trick.

The poster for Steven Spielberg’s Poltergeist (1982) is a classic example.

None of its individual components are very scary.

There’s a little girl, a teddy bear, a big TV screen. There is no blood or gore, no ghosts, not even a spooky typeface.

But, somehow the layout drenches it in fear and loathing. Clearly something inside that TV has enthralled that poor, innocent girl, and she’s helpless, lost in the darkness, beyond our or anyone else’s reach.

Interestingly, for the 25th anniversary edition (2007), they reworked that original poster, removing most of the negative space and scaling up the imagery, with questionable results.

Now, as the viewer, we are sharing the room with the girl. Sure, it’s no holiday destination, but a lot of the desperation has ebbed away.

So, what’s the trick to using Negative Space?

Getting deeper into pure design, negative space used with other design concepts like divisions of thirds and fifths, grid-based design and typography (not just choosing fonts, but the craft of creating interesting and engaging type) becomes a very diverse set of tools in an effective toolbox.

The pro designers go into that toolbox on every project, but don’t use every tool, every time, of course.

It becomes chaos when you try to overdose on techniques – much like writing web code. The best approach is usually the simplest one, using the least code. Design is no different.

The bottom line is, it’s not easy to create good design the first time out of the gate, and frankly, there’s a lot of really bad design out there, in and on all mediums.

I find, in any situation, the best design approach is the one a Creative Director I used to work for used.

“Get the message right. Make it clear and easy to follow, and keep it on strategy. Do that, and the design will take care of itself.”

Put the negative space technique in your design toolbox, and whip it out now and again. Your clients will challenge you to fill every pixel, yes. It happens to the best of us.

But, a good design is always the best defense.

Shawn Barry is a creative professional and Owner/Creative Director at Booster Rocket Media. Shawn has over 22 years experience in the creative industry as a graphic designer and art director. He also teaches graphic design through his own youtube channel.

Can negative SEO really get your site penalized?Pierre Zarokian