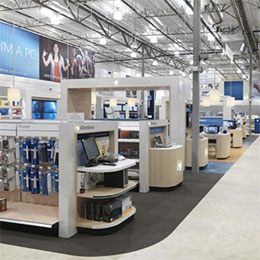 It’s a big week for Microsoft. Windows 7 debuts on Thursday and the new OS is widely expected to be a success. Microsoft would argue that Vista was hardly a flop, but individuals and organizations have been slow to upgrade from the more-than-capable Windows XP. I’m going to make a sweeping statement that may shock some: Vista isn’t that bad. It has some irritating habits and needs decent hardware, but the majority of problems have been ironed out. However, Vista gave Windows a bad name and much of the media mud slinging has stuck.

Microsoft learned valuable lessons with Windows 7. It’s leaner, faster, and the OS has been publicly tested for many months. It’s good — even I bought a copy. (Although I may have reconsidered if I’d seen Microsoft’s embarrassingly awful “Hosting Your [Windows 7] Party” commercials first!)

Excitable Microsoft CEO Steve Ballmer will unveil Windows 7 at a press conference on Thursday. Industry rumor-mongers are also expecting him to provide further details about the opening of Microsoft’s standalone stores, with the first expected in Scottsdale, Arizona, US.

This is a new venture for Microsoft. As well as tackling Google in the cloud, they hope to beat Apple on the high street. But will it work?

Microsoft manufacture many products, so I’ve no doubt that they can fill a shop with desirable items such as the XBox, keyboards, mice, accessories and software. However, those products are available from almost every online and offline electronics retailer.

The same could be said for Apple’s stores, but they have a stronger and more tactile brand. Apple’s customer base has an unhealthy obsession with the products; fanboys stick with the company, they are less price-sensitive, and are quick to forgive any corporate transgressions.

That said, Microsoft is the world’s most successful IT business and they can obviously see some potential. Perhaps their own stores will raise the company’s profile beyond boring business software? But can Microsoft’s products ever reach the levels of desirability enjoyed by Apple?

Would you visit a Microsoft store? Would you find it exciting? Would you admit to that?

Browser Trends May 2015: Can Microsoft Regain the Edge?Craig Buckler