Think back for one moment: how often have you manually reloaded a website to see the changes just made in the code editor? Hundreds of times, maybe thousands if you are a bit longer into the web business.

This behavior seems to be so inherent to us, that we don’t call it into question. Yet it could be so easy. There’s a little tool called LiveReload, which magically reloads a webpage for us as soon as we save it. You may have heard of it, but never bothered to give it a try since the setup can have some pitfalls. The following guide will show how to get LiveReload up and running and finally give CMD + R (respectively F5 for our Windows friends) some rest.

The easiest way to bring relief is the eponymous App which can be found in the Mac App Store, whereby the emphasis lies on “Mac” here, since the program is only available for this OS in the final version. You will also find an alpha release for Windows on the website, but I’ve never tested it. However, the workflow described below should be more or less the same. Furthermore the luxury of the LiveReload App has literally its price, since it comes at 8,99 € (£6.99/$9.99).

Luckily, as often in life, there is an alternative – maybe not so luxurious and coupled with a little bit of sweat, but every bit as effective as the paid App. LiveReload is also ready to be used directly within everybody’s favorite code editor Sublime Text 2 and a few others (a list of all supported editors can be found here, but I will show you on behalf of the former how to employ the plugin.

No matter which application you choose, there are generally two ways to use LiveReload in your daily workflow. Each of them needs some preparations, but they’re not that difficult. The most effective way – although it may sound pretty complicated for beginners – is to set up a web server. This way you don’t need to alter the files of your project to add the LiveReload behavior. The easiest way is to grab a copy of XAMPP (Mac, Windows) and run the installer.

After that locate the “htdocs” directory, which can typically be found in “/Applications/XAMPP/xamppfiles/htdocs” on a Mac and “xampp\htdocs” in Windows, make a new folder in there and drop the files of your website into it. Now you just have to start the webserver at the control panel by clicking on the Apache “Start” button. Your website should now be available at http://localhost/

Believe me, things get much easier from now on. The next thing you need to install is the LiveReload browser extension, which you can find here for Chrome and here for Firefox (yep, no IE). Now just point the LiveReload App to the folder, where you have put your files after the setup of XAMPP by clicking on the plus sign at the bottom left corner of the window. 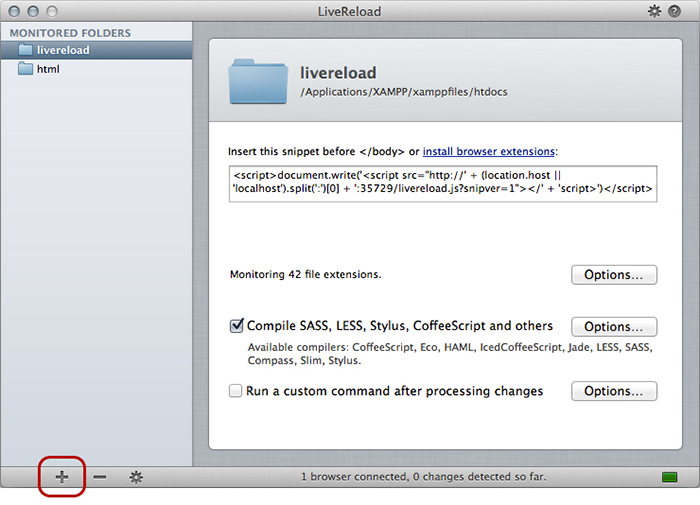 Then open the web server’s localhost URL from above and enable the LiveReload extension by clicking on the related symbol (as seen on the screenshots below). Back at the LiveReload app it should now say something like “1 browser connected, 0 changes detected so far” at the bottom. As soon as you change a file of your website – no matter if it’s HTML, CSS or JavaScript – the changes should be immediately reflected within the browser now.

The buttons for the LiveReload extension in Firefox (top) and Chrome (bottom).

If you rather want to stay in your accustomed environment of your code editor – in this case Sublime Text 2, which I will use exemplary here -, the implementation is a little different. First you need to install the essential package manager Package Control, which just requires to enter some code into the console (“View > Show console” at the menubar of Sublime Text 2). The exact installation process can be found here.

After you have restarted the editor, hit CMD + Shift + P (CTRL + Shift + P for Windows) to open a Package Control prompt, type in “Install” and “Package Control: Install Package” should immediately be highlighted. Then hit Enter, wait a few seconds to load, write “LiveReload”, select the appearing entry, hit “Enter” again and the plugin is installed. Now restart Sublime Text 2 once more and like at the native App you just need to enter the localhost URL from above into your browser, enable the LiveReload plugin by clicking on it and from now on every change of the files of your project are directly reflected in your browser without the need to reload. 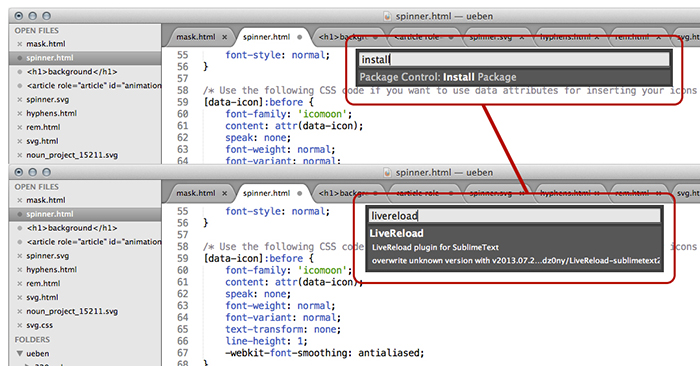 What to type in at the Package Control command prompt.

If all of that is much too complicated for you, there still remains the second way to use LiveReload which I promised above. It’s much simpler to set up, but has the disadvantage that you need to insert a small script into every HTML (or PHP or whatever) page of your project (which the browser plugin handles for you at the first method). It looks like this:

If your web site is running on another server, you need to specify the IP address of your local computer instead. For example:

Insert it right before the closing tag and you’re all set. Yep, all set. “Way easier than the hassle with web servers and browser extensions” you might think, but not every project allows to insert something else unneeded to every single page. But where there is shadow there is also light (or is it vice versa?). If you prefer the script method of LiveReload you have a big bonus: the live changes are also available on other devices apart from your developing machine – which, however, might again require a web server. Keen to know how to do that? Find out the IP address of your computer and enter it – including the (web server) path to your project – into your device you want have the LiveReload behavior on. Now if you change a file the differences also appear magically on your (mobile) device. Sweet, huh?

The script method works with the LiveReload app as well as Sublime Text 2 (or any other supported editor). For the sake of completeness I also want to mention that it can be combined with the browser extension, although that doesn’t make much sense, since the script already takes care that LiveReload works in every environment.

But LiveReload has even more to offer. It’s the perfect companion for SASS, the favorite CSS preprocessor everybody seems to use. The compiler is not only triggered if you save the main SCSS file, but also if you edit a partial (an included file). The setup can be a little bit tricky, depending on the type of LiveReload you want to use, since the config.rb file needs to reside in the main directory of your project for the App, and in the SASS directory if you use the Sublime Text 2 plugin. Apart from that you can also use it to compile CoffeeScript, Eco, HAML, IcedCoffeeScript, Jade, LESS, Compass, Slim and Stylus.

If all of that still can’t convince you, I might yet have something for you. Recently a pretty sweet package called LiveStyle was released, which supports bi-directional editing. That means not only that changes you make in your editor can instantly be seen in your browser, but also vice versa.

Changes which are made with the developer tools are also updated in your editor. You even don’t need to save the files. Watch this and marvel.

Unfortunately LiveStyle just works with vanilla CSS (no SASS or the like) and only supports Google Chrome, Safari and Sublime Text (with more browsers and editors to come). But it’s free (so far). 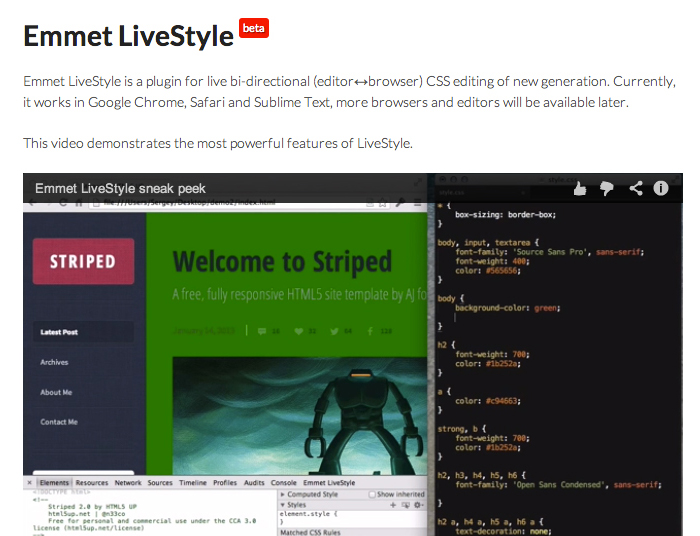 As you can see there are several ways to finally give the reload key of your browser some rest. At first the setup of LiveReload may seem intimidating, but once everything runs, you won’t look back. It’s just a little tool, but will boost your productivity a great amount.

Christian Krammer has been a web designer for more than a decade and currently earns his keep at a small advertising agency. He is also the proud owner of css3files.com, a comprehensive guide to CSS3. Besides that he is married, the proud father of a six year old boy and a movie lover. His portfolio can be examined at chriskrammer.com.