This week Google made the fourth announcement in the past 12 months that has made me question whether the company is beginning to lose focus. Google built itself to be the 33rd biggest company in the world (by market value) — the 10th largest in the US — based almost exclusively on one thing: its dominance of the online advertising market, specifically the search advertising market. But recent forays in areas outside of search and into content production and even areas notoriously difficult to monetize have has made me begin to wonder if Google is heading down the “kitchen sink” path that has been so disastrous for Yahoo!

It began last year with Google News. In August of 2007, Google News announced that it would begin hosting content from wire services. To be fair, this was mainly a response to legal troubles the site ran into for linking to wire content with excerpts. But even so, it was a shift from a service that nicely paralelled their core search business — one which indexed and linked to content, like search — to one that involved the publication of original content.

Yahoo!’s News site has been one of the major successes for the company, long the web leader in the news and media category according to market analytics firm Hitwise. Google’s move could be seen as a way to keep ad dollars in house (and thus fit in with their core offering), but Google does not display ads on its news site.

Next, in December of last year Google announced the Knol Project. Think of Knol, which is still in private beta, as Wikipedia with ad revenue sharing. Even with the advertising component, Knol is still a foray into content production rather than content indexing (one that the Guardian’s Jack Schofield called, “an attack on the media industry in general.”)

Why didn’t Google just invest in the non-profit Wikimedia Foundation’s Wikipedia project the way it has in the Mozilla Foundation’s Firefox web browser? Certainly, Knol could be an advertising play and could produce content that could be used as the basis for a semantic database to enhance their search engine, but it is also still a content play. And that’s dangerous waters. History has shown that Yahoo! was wrong to try and turn itself into a media company, so it is baffling to see Google make moves in that direction. 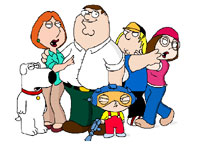 In the last couple of weeks things are really starting to come unglued. First, at the end of June the New York Times reported that Google had struck a deal with the creator of Family Guy to create original cartoon content to be distributed via the Adsense network as video ads. I like Family guy as much as the next guy, and being that I live a few blocks from where Seth MacFarlane went to college, I get a kick out of all the local references in the show, but this one is just a little too Yahoo!-like.

It was no secret that during Terry Semel’s reign as Yahoo! CEO he wanted to push the company more toward the media end of its business and away from search (he even commuted from LA). It hasn’t worked for Yahoo!, so why is Google trying it?

That’s the same sentiment that comes to mind with this week’s announcement: Lively. Google released a new 3D virtual world earlier this week called Lively. Yes, it started as a “20% project,” but now it has Google’s official blessing.

Second Life, the most well-known and perhaps largest non-game virtual world, has struggled to sell itself to businesses, so why is Google trying it? Second Life’s traffic has basically plateaued, so Lively seems like a strange application for Google to be launching. Is it and the rest indicative of a growing lack of focus at the company?

Most of Google’s forays outside of their core search business — YouTube, the Android phone platform, the Google Apps suite, etc. — can be looked at as somehow corollary to their other core business of web advertising or as strategic attempts to weaken key competitors. (Though YouTube is proving very difficult to monetize.)

But could Google be spreading itself too thin the way Yahoo! did over the past decade? Is Google starting to eat the peanut butter? What do you think: is the search giant losing focus of their core business?