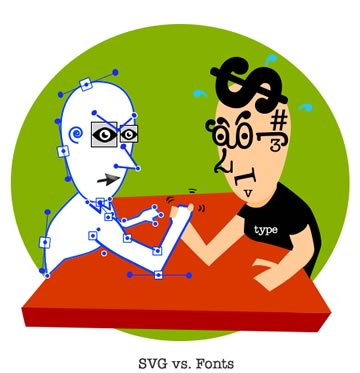 We all know the feeling: just as you feel like you've finally achieved mastery of some great web technique… it's time to switch to something new and better.

It has certainly happened to me many times, and it happened again recently with icons. After a long period where icon fonts seemed to be the natural, best-practice solution, SVG has introduced some useful innovations that may have changed the rules of the game.

Choosing any technique is a task that involves weighing up many topics. When we deal with icons we need to consider:

So, what is the best choice now? Can we still get by with icon fonts – or it is time to turn to SVG?

I realized that when we talk about icons, it's easy to take for granted some topics which we have been dealing with in the past. They can help us to better frame the debate, but not everyone knows them. So, I've put together a very brief 'history of icons techniques in web authoring' to help clarify the debate. (If you feel you're ok with the history part, jump ahead).

Back in the mid-90's – a time when browsers had little to no CSS support – icons were managed with the classic <img> tag. This technique brought with it a lot of accessibility and semantic issues. Furthermore, pages that used lots of icons had to fire off a barrage of performance-crushing HTTP requests: one for each icon in the page.

What’s more, if you intended to introduce a :hover effect, you had to load these secondary images with JavaScript.

Happily, things got significantly better with CSS Sprites (or Image Sprites). This technique consists in arranging all icons in a single, unique file (typically GIF or PNG) to be loaded as a CSS background image. The needed portion of the image can be shown by adjusting the background-position property, as in the scheme below (I've also made a pen, if you want to see a running example):

This technique is still used by many huge sites like Youtube and Google and it solved a lot of problems:

I've prepared a little test that creates two lists: one with sprite icons and one using <img> tags. On the left side of the image below, you can see how the two lists are close to identical (except that the second one required much more code).

The right side is a screenshot of the same lists rendered with Lynx viewer (a web emulator of the text-only web browser Lynx) and it can give you some idea of how your web page may appear using assistive technologies (though A.T. output can vary widely).

You can see that the second list containing the images alt texts (green highlighted), which in this case are perfectly useless, since they confuse the content rather than adding meaning to it. True, we can avoid this by using empty alt attributes (as in the last two items), but we still have content elements (the images) being used as presentational attributes. 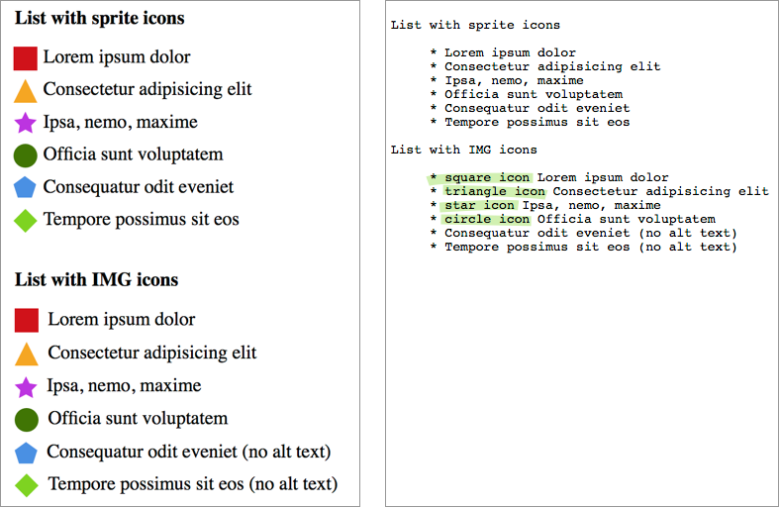 Of course, there are many cases which require meaningful icons, and the above CSS sprites example doesn't represent the best solution. We'll come back to this topic later.

Although they represented a big step forward, CSS sprites are still bitmap images. As such, if you need to represent the same glyph in different colors or resolutions, you need a different images for each version.

This problem was resolved by font icons: since fonts are vectors, they are resolution independent and can be easily colored through CSS.

The most common way to apply icon fonts to a page is through a pseudo element – just like we did with CSS sprites. Unfortunately this doesn't resolve the issue of meaningful icons, since this technique still leaves them invisible to screen readers.

The first part of the screenshot represents a common icon implementation (using a pseudo element). In this case the icon is part of the content and has a very specific meaning. Unfortunately Lynx can't see the icon, producing a nonsense sentence. You can see the result in the second part of the image.

Luckily there is an easy workaround for this issue: you can add a description inside the icon element (in this case an <i> tag). The description is wrapped inside a <span> that is styled to make its content invisible to browsers (it has usually a big text-indent value), but not to screen readers, that don't take care about this tricks:

Now, a screenreader can make sense of this as a meaningful sentence:

These topics are deeply addressed in some old articles on Filament Group blog, 24 Ways and CSS Tricks.

Although accessibility issues regarding icons are not yet solved, you can do more using WAI-ARIA techniques, paying attention to font sizing, color contrast and so on (if you are interested in these arguments, take a look at the Web Content Accessibility Guidelines from W3C).

But accessibility is not only an issue of screen readers. Even users of common browsers can be seriously impacted by our icon choices. Alex highlighted on SitePoint recently referencing a talk by Seren Davies. It demonstrates how icon fonts are not an evergreen solution, and that it may well be time to move on.

Browsers have wonderful systems for receiving, scaling, rendering and manipulating text. Ultimately co-opting that system to manage and render imagery can only undermine that powerful text function.

The Case for SVG

Finally, we come to SVG.

SVG further enhances what we have seen regarding icon fonts. Chris Coyer wrote an interesting article about Icon Fonts VS SVG features, so I'm going to be very concise about these topics:

SVG icons can be implemented in many ways (I have covered many techniques in my previous SVG icons article), all them can be useful, but I think that the better solution is represented by the SVG symbols technique.

SVG symbols give you the best control on your icons as you can easily change their color and, by using relative units, you can resize them according to the related text.

At the moment only Firefox seems to let you edit symbol parts via CSS. Viewing the previous pen using FF, the third row should appears just like the last one, which uses inline SVG.

In the same way, text and screen reader support can't be always granted (for example, the previous pen is not correctly rendered with Lynx Viewer).

If you want to see more example, take a look at my other pens about SVG, and if you want to go deeper with SVG and accessibility read Léonie Watson’s very interesting Tips for Creating Accessible SVG or Dudley Storey’s Making SVG Accessible article.

Let's go back to the question we have started from: what is the best choice now between icon fonts and SVG?

As usual, the answer is: it depends. You must consider all the element of your project evaluating compatibility, accessibility, user experience etc. Personally, I'm increasing the use of SVG symbols in my projects, and avoiding icon fonts when it's possible. 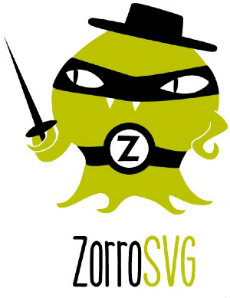