When someone mentions the term blogging platform your mind likely brings up thoughts of WordPress, or maybe Blogger.com. It did, didn’t it? While those two platforms have clearly carved out a respectable slice of the world’s blogging population, there remains a void left unfilled. This gap in platforms was largely created by the incredible popularity and growth of the blogging world itself.

In the case of WordPress, what started out as a clean framework for publishing to the web has now grown into a full­fledged CMS aimed at tackling entire websites. So what about those folks that still desire a simple and effective way to write to the web without the overhead of a feature rich CMS? Well, as of a few short weeks ago (October 14th to be precise) there’s a new entry in the blogging platform race that hopes to meet your less demanding needs.

A focus on writing

This new entrant goes by the stealthy moniker Ghost. A fitting name really, given its unapologetic focus on no­frills web publishing. The pet project of former WordPress UI team member John O’Nolan, Ghost was created out of frustrations with current blog builders. Ghost’s own “About” page says it best when discussing John’s motivations:

“After years of frustration building blogs with existing solutions, he wrote a concept for a fictional platform that would be once more about online publishing rather than building complex websites.” 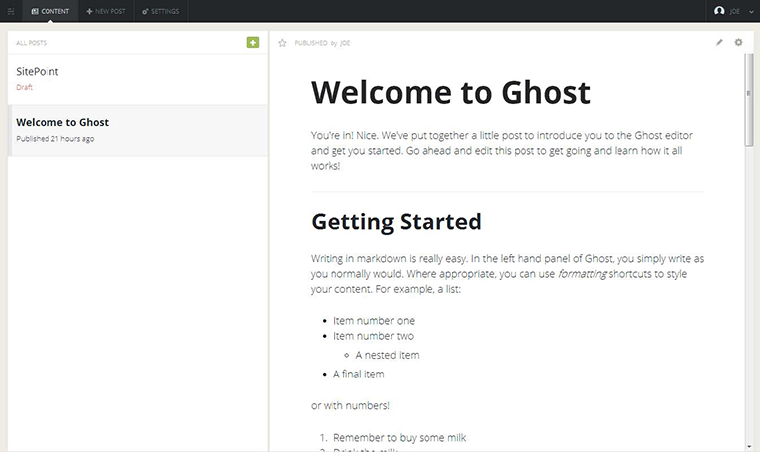 Simply click the edit icon on any given post and you’re whisked away to an elegantly sparse editing view. Inside this view is a double pane window with markup on the left and a live, real­time preview on the right. 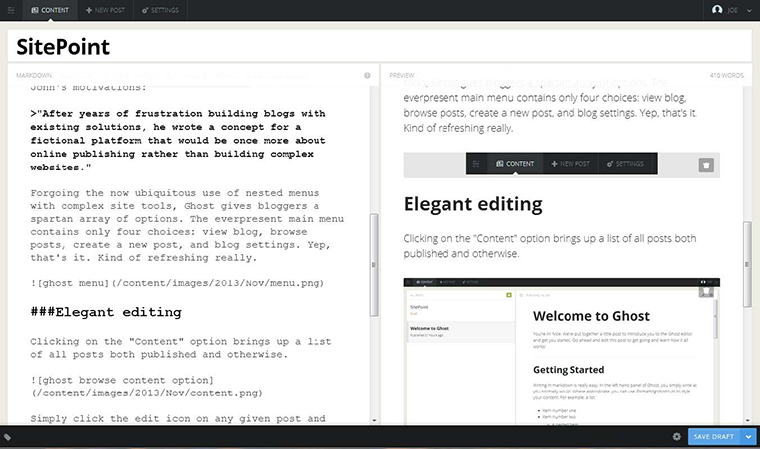 Markup and HTML can be typed into the left pane and the right pane automatically updates with the converted content in real­time. This works marvelously well and lets you, as the blogger, focus on producing quality content without the distraction of jumping through menus and page previews.

The real usefulness of Ghost’s editing approach lies in the flexibility of the markup language. With the double pane feature you’ve essentially got the power and portability of markup with the aesthetics of a WYSIWYG editor. It’s the best of both worlds.

As a quick example of the seamless (and productive) combination of the two pane method; to insert an image you would simply create the markdown alt text ![alt image text] as a sort of “placeholder” and then drag and drop the desired image into the designated area. The image is automatically uploaded and placed in the post. Both easy and efficient.

Despite Ghost’s simplistic approach to blogging it retains a surprising penchant for extensibility. The ghost team has set out from the get­go to provide excellent plugin support via official API’s along with easy methods of distribution through their own “Marketplace“.

Within the marketplace users will be able to browse and download both paid and free Ghost extensions. In its current form, the Ghost marketplace showcases only themes with plugins coming later on down the road. Also on the way is the highly touted Ghost dashboard which will pull in and present useful analytics. The dashboard will be easily customized with drag and drop widgets to represent the desired data. 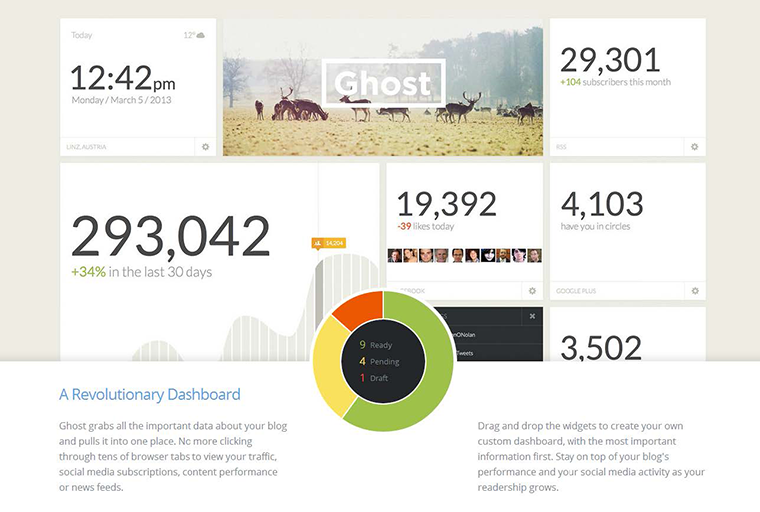 For the dev types among you, Ghost has been developed as a node app written in JS. This leads to a slightly more complicated installation than its WordPress counterpart, though much of the setup can now be accomplished through automatic installers provided by third parties.

By default, Ghost utilizes SQLite3 as the chosen database for storing content though you’re free to choose your own backend by editing the config.js file in the Ghost install directory.

Here’s an example using MySQL as the database:

As of this writing, the only way in which to use Ghost is to install the application yourself. Spend more than five seconds on the Ghost website however and you’ll quickly discover the team’s plans for a much easier and robust deployment.

Ghost’s own hosted service is set to debut in the near future. Those that subscribe to the service will reportedly get the “full experience”. According to the Ghost website itself:

“You’ll need hosting for your blog no matter what, but our service will be the most powerful way of running Ghost ­ and the easiest to get started with. You’ll have the full Ghost software with all bells, whistles, themes, plugins, and some extras that are only available with us (like automatic updates and backups).”

The end of WordPress?

A silly question really, as the two platforms aren’t at odds as much as you might think. As stated briefly above, WordPress sets out to accomplish far more and has a much wider use case.
Ghost on the other hand is created to be a simple platform for writing to the web. Nothing more, nothing less.

That being said, the release of Ghost holds great promise for the future of blogging and gives current bloggers ample reason to take a hard look at their own platforms and decide if maybe they could do without all the excess. Should you decide to jump ship or even just test the waters, there’s already an official WordPress plugin capable of migrating your WP posts over to Ghost’s open arms.

Ghost is an open source project, free of charge and can be downloaded from the Ghost website immediately. How to Install Ghost on WindowsTahir Taous