Getting Started with Laravel on Nitrous.io

On February 12th, Nitrous.IO, the cloud development environment that lets you set up virtual boxes in a flash and use them from whichever platform through their Web IDE, finally added PHP support – something users have been clamoring for.

You can read more about it in the announcement, but I figure it’s best if we demo by example and get a Laravel app up and running.

Create an account on Nitrous.io if you don’t have one yet, or follow my ref link here to do so (full disclosure, this gives me nitrous – the currency used to bring more powerful VMs online). After spiffying up your profile, I encourage you to go into Public Keys and add a public SSH key of your own if you generally use them for SSH connections and similar. A detailed guide is available on GitHub.

Let’s go into Boxes and click “New Box”. Select PHP, a region closest to you, and allocate as many resources as you wish – you can spend your entire Nitrous balance on this if you so choose – when you terminate a box, your nitrous is refunded. 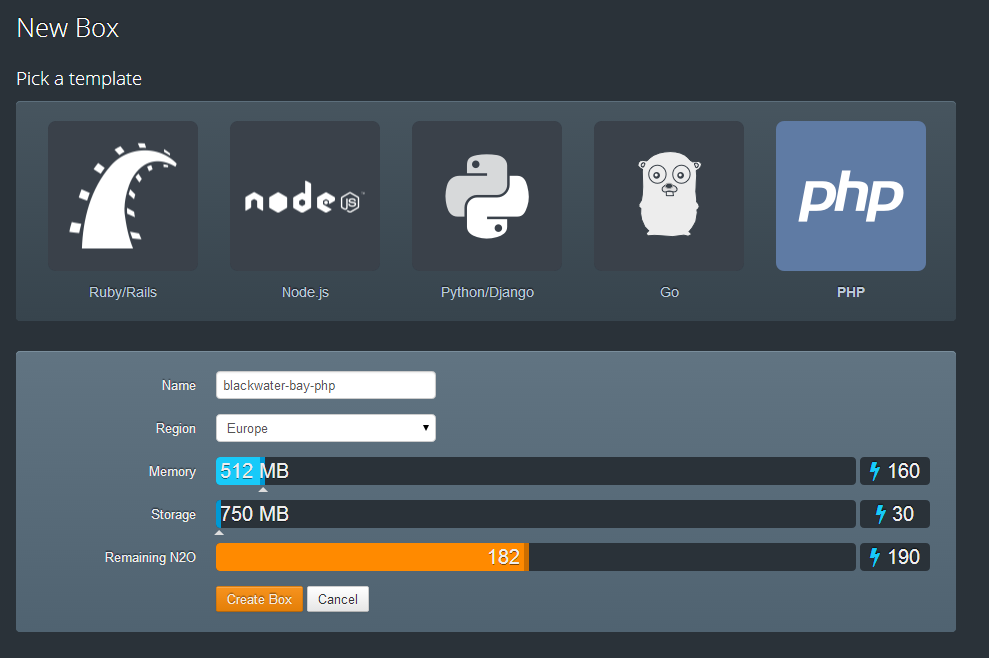 After clicking Create Box, your box will be provisioned – not unlike with Vagrant. You just won’t see as much output, and it’ll be much faster. 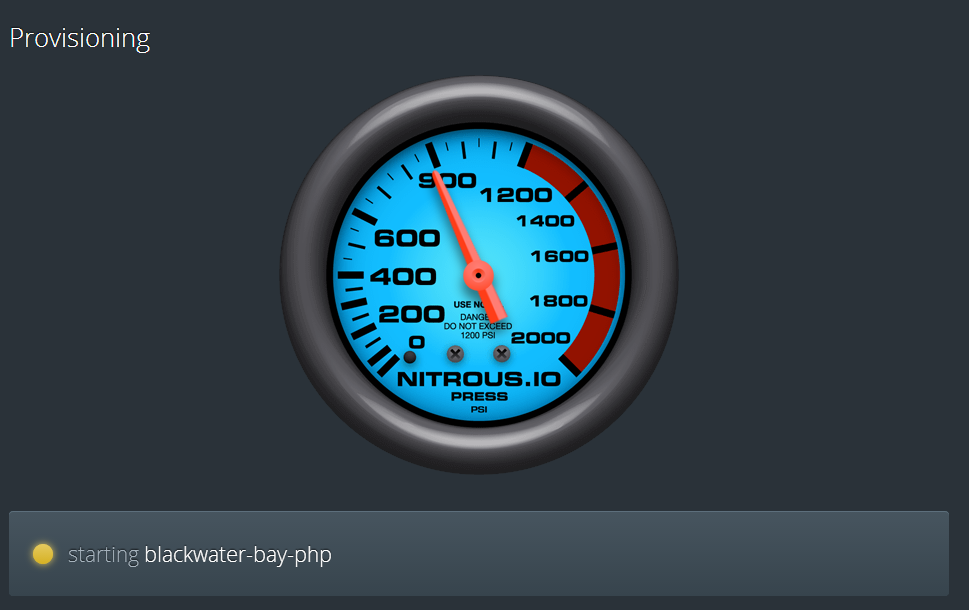 Once done, you’ll be greeted with a friendly and vaguely familiar interface, along with an introductory file that guides you through setting up the rest. 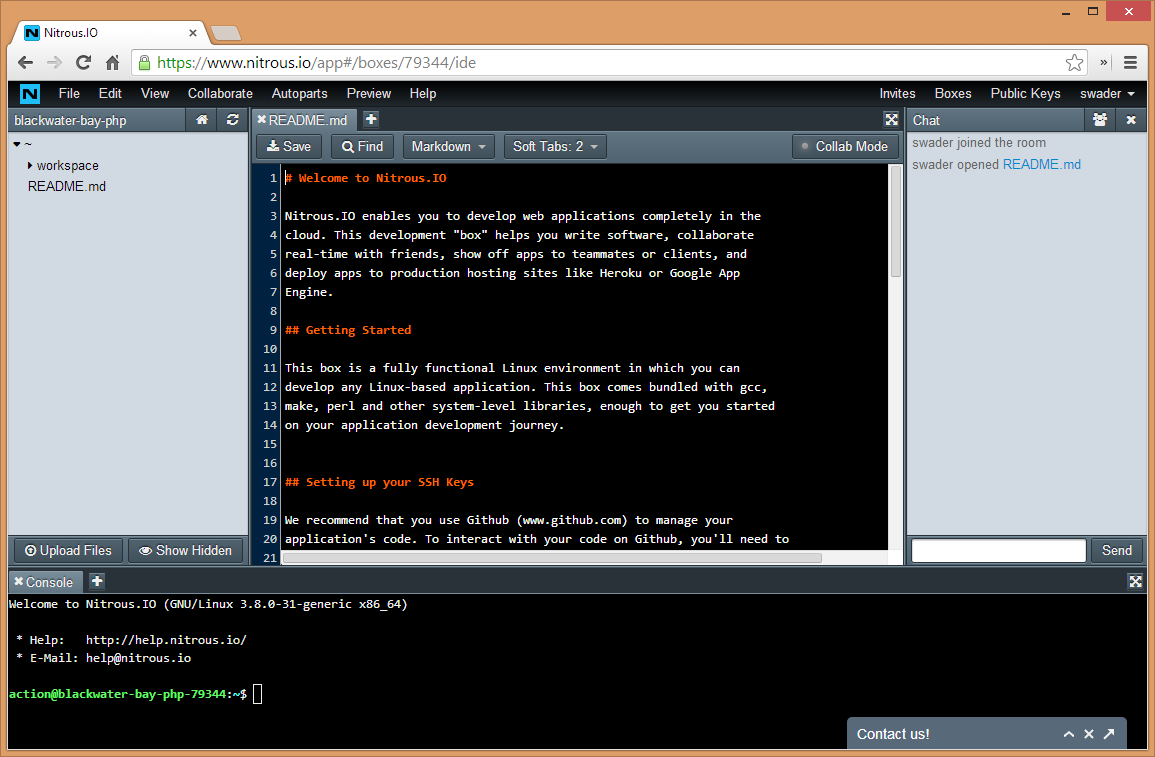 You can also run a PHP box by using any other template, and then using the Autoparts -> Install Parts menu to install PHP related tools like Apache, PHP, MySQL, etc. In the PHP box template, those parts are included. If you now use the included console to output the PHP version, you should see 5.5.8 displayed:

“Parts” is something like Nitrous’ custom tailored package manager, and you use it to start services and install parts. Parts can also automatically install WordPress for you, but who would want that anyway?

Open the workspace folder, and create a file called index.php in the www subfolder with the contents:

Then, go to Preview -> Port 3000 (the default). You should see the following PhpInfo screen in your browser: 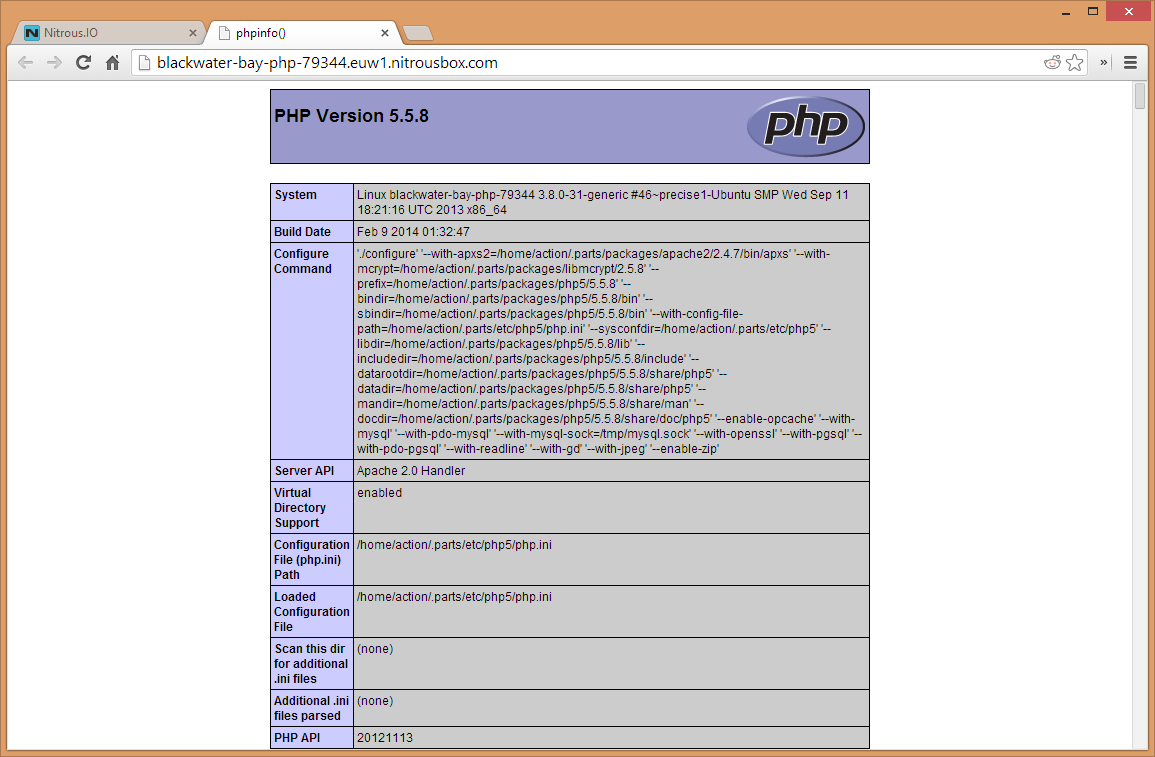 Note that the other ports won’t work unless you configure them that way. The first one (3000 SSL) is a premium feature, and you’ll have to pay for it, while all others can be defined if you use the console to edit httpd.conf:

Composer needs the Zip library to work, and installing it on our box is very simple, as per instructions

To paste in the console, remember to press CTRL + SHIFT + V instead of just CTRL + V. Building and installing might take a couple minutes, wait it out.

But having a www folder is so early 2000s. Almost smells of a shared host, doesn’t it? Let’s pro it up.

There are two paths you can take here. One is defining multiple virtual hosts, as is common with Apache. The other is renaming the www folder to public and using the workspace folder as our app’s folder. I’m not a fan of the latter, because it imposes some limits on my pre-built apps, so let’s go with the former.

At the bottom of the file, add the following block:

Literally, add it to the end of the httpd.conf file:

An alternative is putting all this into the config subfolder as the comment near the top of the httpd.conf file says. Pick your poison, either works.

Now create the folder mentioned in this configuration.

The -p parameter forces a recursive creation, meaning it creates all parent folders as well. Now add the same index.php file with the phpinfo(); content into this folder. A shorthand command to do it is this:

Restart Apache with parts restart apache2 and try opening the site on port 4000 via Preview -> Port 4000. You should see the same PhpInfo screen as before.

You can set up other virtual hosts in the same way.

Update: Note that Composer is now pre-installed, and you can skip this step. Still, this part covers installing of custom binaries, so you might want to read it nonetheless.

Now that we got virtual hosts out of the way and can run several apps under one box if we so choose, let’s install Composer. We’ll be installing it globally – installing it once in every app makes absolutely no sense, especially on boxes with such limited hard drive space.

Nitrous.io boxes are limited in that you cannot create folders outside your home folder. To get around this limitation, we’ll just install it into a folder inside our home folder, and add said folder to the $PATH.

Once vimmed, edit .bashrc by adding the following to the end of it:

Then, reload the .bashrc file by executing source ~/.bashrc.

With that, Composer has been globally installed and you can use it from whichever app you want. Try it out by executing the following commands:

Composer, check. Virtual host, check. Let’s fire up Laravel, shall we? FYI, I chose Composer as the method of Laravel installation because it’s useful for much more than just Laravel, and you’ll eventually be needing it for other non-Laravel projects too.

First, let’s remove the myapp folder. Composer won’t create a project in a folder that’s not empty, so this will allow it to start from scratch.

Then, initiate the create-project command:

After a minute or two, everything should be downloaded. Visiting the same 4000 port on our box should give us the Laravel greeting screen. 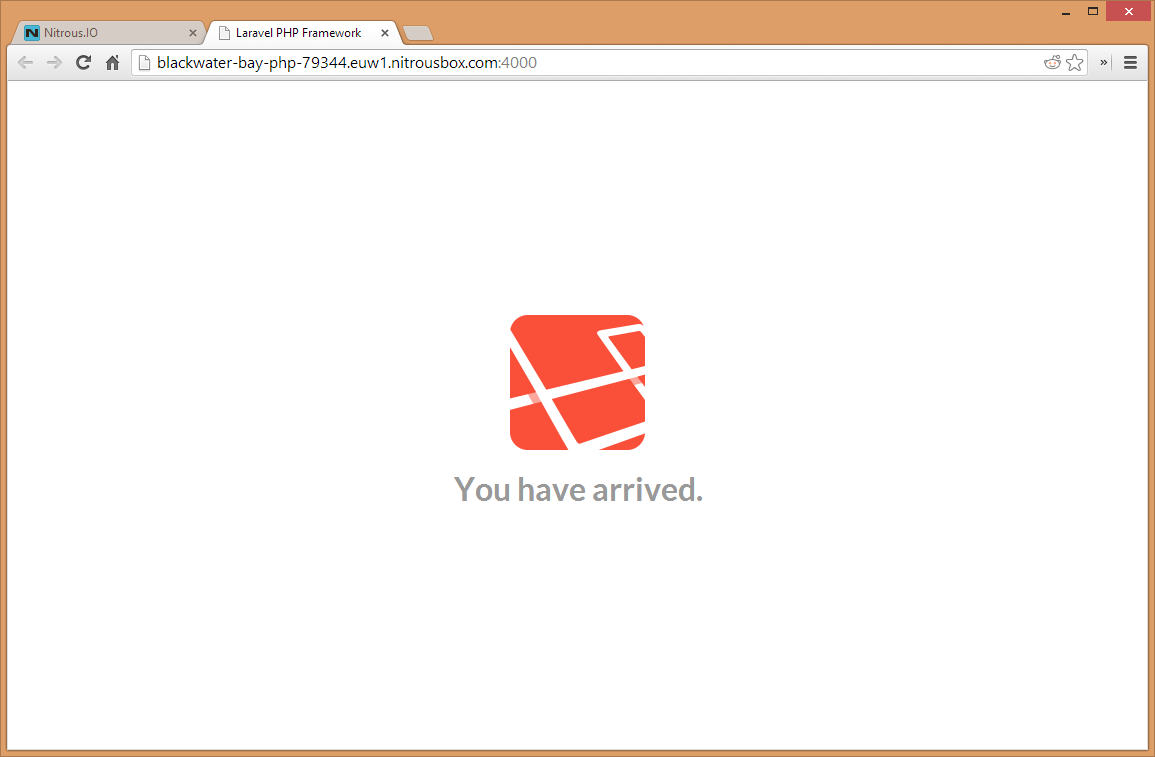 Following the Quick Start Instructions, we add a closure route to /test by adding the following content to app/routes.php:

Let’s first check if our database works. Try punching in mysql -u root into the Nitrous command line, and see if you get in. If you can list databases with SHOW DATABASES;, change database to test with USE test; and then list tables in that database with SHOW TABLES; (result should be an empty set), you’re ready.

Laravel is, by default, configured to use the same insecure settings Nitrous uses – database username “root” with no password. As such, the connection is ready by default – all you need to do is change the database name in the config file to “sample”, as that is the one we’ll be using in the following example.

You should, naturally, change your credentials – in MySQL, add a user that’s only allowed to mess with a specific database, and add that user into the app/config/database.php file in the appropriate section. For user-based database privileges, read this answer. We won’t be doing that just for the purpose of this demo.

We could follow the Migration example in the quick start doc, but I’d rather do it all in one go and have our sample data ready instantly. To create a sample database with a test table and three rows of sample values, execute the following command in the Nitrous console, regardless of the folder you’re currently in:

What this does, if you’re curious, is fetch my gist with the SQL code required to make it happen, outputs it to the standard output stream in the shell while silencing all errors and other log info, and applies it to MySQL after logging in as root.

We won’t be building a model just for the test data – I assume you can follow the extremely simple instructions on the Laravel page to make that happen yourself. Instead, we’ll just be demonstrating Laravel’s ability to connect to the database here.

In the routes file from before, replace our previously written closure with the following:

Refreshing the /test URL, we get the database output:

This article proved how simple it is to get a Laravel configuration up and running on Nitrous.io. Play around, look at the documentation, try to break things. If you do, just terminate and recreate the box – it’s that simple.

We’re in an age of virtual machines at every step, and our hardware and bandwidth are powerful enough to prevent us from polluting our main desktop environments with needless installations. Experiment without fear and let us know what you come up with, we’d love to take a look.